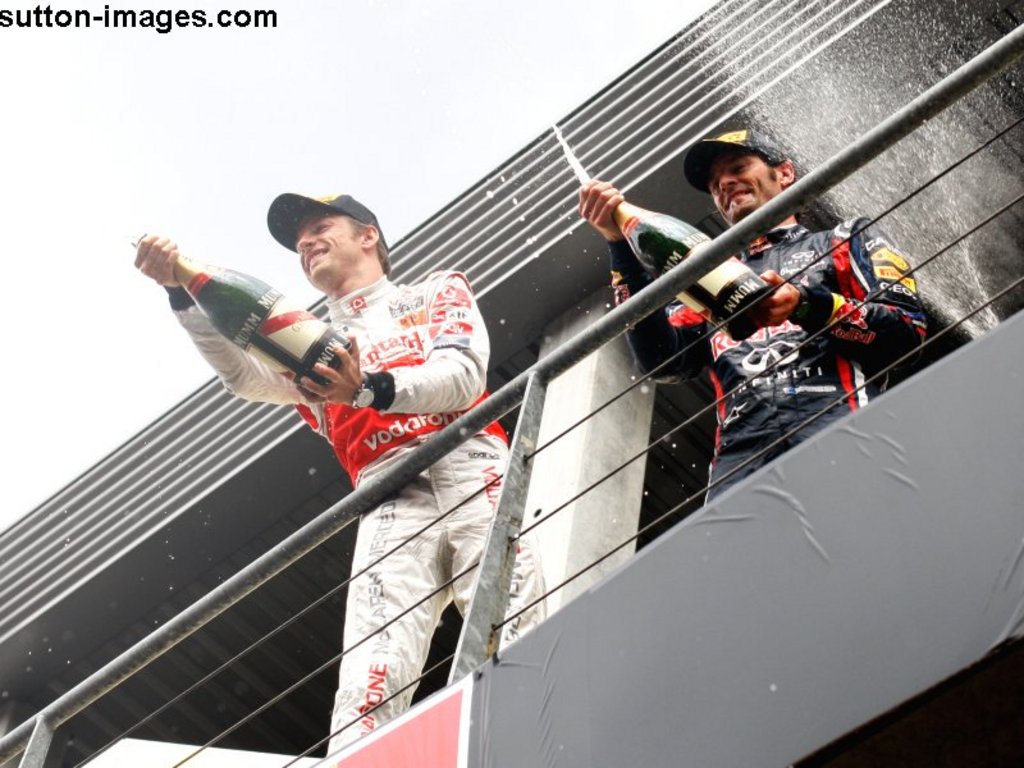 Senna, Toro Rosso and Hamilton were the big losers – Adrian Newey’s heart condition was the big winner at Spa.

Star of the Race
Jenson Button, McLaren, 3rd
Thanks to the early stop to replace his front wing Jenson Button was actually behind Michael Schumacher after the Safety Car period, but drove through to claim a brilliant podium place. (because it was Jenson vs Michael for DotD) Button benefited from the DRS zone, not because he used it for every pass – two in one corner and Massa at the Bus Stop, but because drivers knew it was pretty pointless resisting too hard as he would only make it past them up the hill to Les Combes.

Overtaking Move of the Race/Season
Lap 9: Mark Webber on Fernando Alonso
There have been close calls down the hill to Eau Rouge before, but never, ever that close. Webber’s pass around the outside of Fernando Alonso going into one of F1’s most feared corners was so close to disaster even hardened professionals like David Coulthard winced. It was immense.
When people compare F1 to MotoGP all you need to do is show them that footage and stand back with your arms folded. Fernando Alonso gave Mark just enough room and played his part in the drama. Had that been Kamui Kobayashi he was overtaking they would still be taking pieces of Red Bull and Sauber out of the scenery.

Winners
Sebastian Vettel, Red Bull, 1st
The relief of the Red Bull team on the pitwall showed that Seb’s 17th win was not a run-of-the-mill affair. Vettel took advantage of the Safety Car to get his tyre strategy back on track and did just enough to stay in front after that. In a way it was lucky that Mark Webber had such a dreadful start because he would have been real competition this afternoon had he not got such a poor getaway. Webbo made it an against-the-odds Red Bull 1-2

Fernando Alonso, Ferrari, 4th
Fernando Alonso was wearing the resigned expression of someone who accepts they are not going to win the Championship but feels he can’t say so out loud. If the TV commentators thought there was a lack of fight, it’s one bought out of pragmatism.

Michael Schumacher, Mercedes, 5th
Schumi’s opening lap (from the onboard camera), when he moved from 24th to 15th, had a blissful serenity to it, with cars simply melting out of his path. It was a great way to celebrate 20 years in the sport and 5th place was just a couple of positions away from that elusive podium.

Losers
Timo Glock, Virgin, 18th
There were at least four prime examples of rushes of blood to the head this weekend and none was more asinine that Timo Glock’s attempt to make up places into Turn 1 on the opening lap. Whereas you can understand why Bruno Senna might not be able to judge what a fully fuelled Renault is like on the brakes (or even in the dry), Glock has no excuse. He ruined Paul Di Resta’s race and took chunks out of Jenson Button’s rear wing endplate. His move was far more chaotic than the Senna/Alguersuari contact. A drive-through was hardly enough.

Bruno Senna, Renault, 13th
The start of the race was an unmitigated disaster, but Bruno Senna had already justified his selection in place of Nick Heidfeld by putting his car ahead of his team-mate and into Q3. That kind of performance has got to make him favourite to be in the car at Monza in two weeks’ time.
But he can’t make that mistake again. Of course if he gets too good he could give Eric Boullier a very big problem…

Kamui Kobayashi
Kamui Kobyashi’s becoming a bit of a liability on the track and there should be some serious post-race investigations into some of his actions. Maybe it is just sheer ineptitude – although the way he cannoned into the Toro Rossos in Hungary looked like something more.
First there was the case in Canada where he drove so slowly through Turn 2 at the Isle Notre Dame circuit that the very experienced Nick Heidfeld drove into the back of him. In Hungary he was on tyres that were shot-to-pieces and tried to defend his position by swerving at the Toro Rossos. This race he braked unexpectedly early for the Bus Stop chicane so that the pursuing Rubens Barrichello ran into the back of him. Again, another experienced driver losing a front wing against his gearbox.
As a footnote, there was the Lewis Hamilton incident as well, and although Lewis has to take blame for being a bit casual in the way he moved over, you have to wonder what Kobayashi thought he could achieve by putting his car there. He was never going to get the place back. Despite what the wigged wonder thought about it, KK didn’t have his wheels on the grass, there was a wheel and a half of space to the white line.

Sebastian Buemi, Jaime Alguersuari, Toro Rosso, DNF
Toro Rosso must have mentally banked a few points before the start of this race, what with Alguersuari 6th and Buemi 11th on the grid. Unfortunately Buemi fell victim to a rash move by Sergio Perez and didn’t get beyond Lap 6 – whilst running sixth And Jaime Alguersuari fell victim to Bruno Senna’s inexperience and sheer lack of caution at the start. It was a miserable afternoon for the team at a GP where their drivers did nothing wrong.