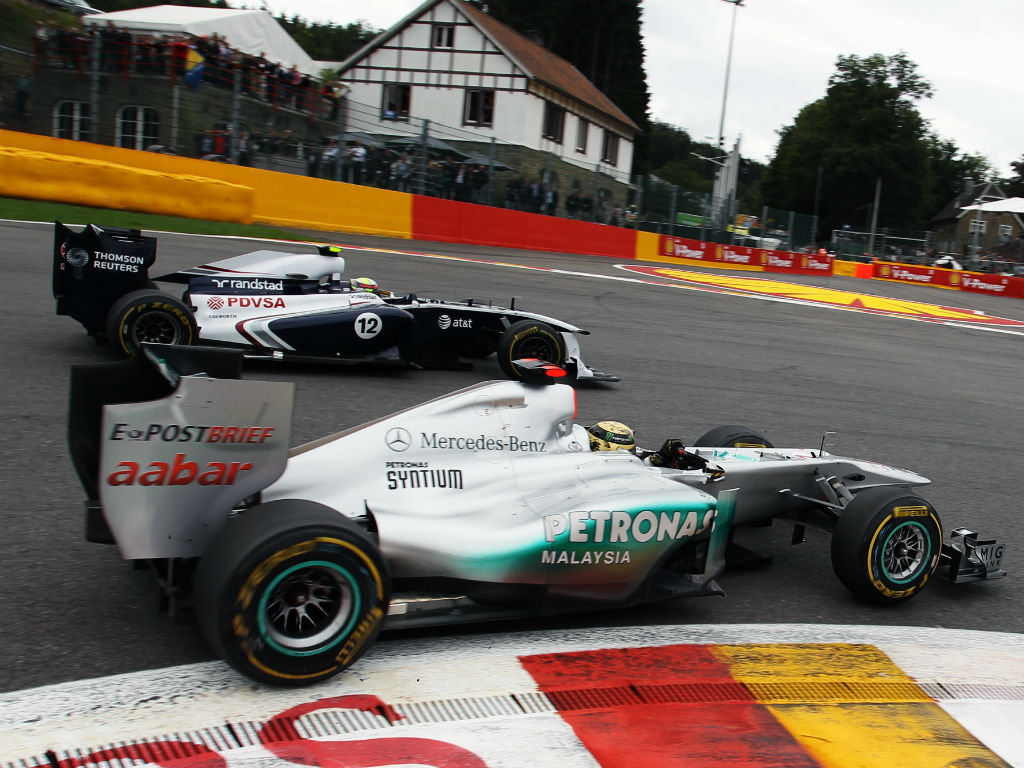 After a summer of sloth, Andrew Davies looks ahead to a Spa treatment, safe in the knowledge that it’s on the calendar for three years…

Who could possibly have said this: “Spa is like my living room; for me, it’s clearly the number one race track in the world…”

Formula 1 finally reconvenes after a very long summer break at what Michael Schumacher rightly describes as the best circuit on the calendar – Spa-Francorchamps (though you have to wonder what kind of living room has 30,000 Belgians in it).

On Sunday Michael will become only the second man to have raced in 300 GPs (after Rubens Barrichello) and how fitting that it’s at the track where he made his stunning debut in 1991. And appropriate also that Mercedes will have financed Race No.1 and Race No.300.

Michael, it hardly needs to be said, is a masterly performer at Spa, on mostly four but sometimes also three wheels. It is a circuit that sorts the men from the boys. If you’re quick at Spa, then you’re quick full-stop. That’s why it was curious to see Jaime Alguersuari dropped from Toro Rosso having qualified in P7 at Spa in 2011. Bruno Senna also stepped into the Renault after Nick Heidfeld’s exit and put it on P6.

Senna then proceeded to ruin both their races by getting a poor start and cannoning into Alguersuari. Sounds familiar doesn’t it.

Spa traditionally favours the Big Engine cars and last year Nico Rosberg led the opening lap for Mercedes. However Canada is also supposed to be a friend to powerful motors and at the Isle Notre Dame they conspicuously failed to turn up. They need to start racking up a lot of points if they’re not going to end up stuck in 5th place in the Constructors’ table. Jenson’s move from Brawn to McLaren at the end of 2009 looks better each passing year.

McLaren are eager to see if the gains they made in Germany and Hungary have carried through the summer months. After the limited development allowed during the break teams will be interested to see what the new pecking order is. Jenson Button hasn’t written off his drivers title chances, but he’s going to need to be on the podium in the next three races.

In contrast to this, should Ferrari return to the paddock with the ability to put Fernando Alonso on pole, then he could have got the 2012 season sewn up. Alonso has made it the year for outperforming his car, so if the car actually comes good it would hand F1’s best driver a hell of an edge. What has also helped Fernando is consistent finishes.

He has now had well in excess of 40 consecutive finishes and must be close to challenging Nick Heidfeld’s record. While other drivers have had a Maldonado incident to cope with, debilitating punctures or alternator failures, Alonso has kept on finishing. This kind of luck has got to end sooner or later.

It’s not helped by the fact that he’s never won at Spa, has never qualified on the front row and in the last two races here started from 8th and 10th. On the other hand team-mate Felipe Massa loves it and has got a better qualifying and race record here.

While El Nano’s 2012 has been about good luck, what about the Lotus team’s (seemingly) bad luck. They’ve spent a lot of 2012 on the No.2 and No.3 steps of the podium with that elusive first victory only seconds away. The bad news for them is that Belgium isn’t going to rival Bahrain for the heat in which they excel. On Wednesday the predicted temperatures in the Ardennes forest for Friday and Saturday are just 17C and 18C with the addition of rain on Friday. On race day it might creep up to 21C. Kimi will be able to curb his enthusiasm. The team have their version of the double DRS available but are not certain to use it.

However the best news of all is that Spa has managed to make a deal with Bernie to host the race for three more years assuring the race through to 2015. Finally Formula One Management (FOM) have realised that watching races at spectacular circuits like Spa or Istanbul is worth not getting the big bag of gold in the form of a massive race hosting fee. With TV audiences slumping in the wake of a move to Pay-TV they need to keep the show the best it can be.

Pirelli have brought the two hardest compounds in their range to Spa, so they will be dodging the gripes of drivers who say they have to drive to the limits of the tyre the whole time. They can chuck the car around at a place that re

Tyre strategy could play second fiddle however to weather however. Spa is notoriously prone to sudden, localised showers, and races are always liable to boil down to inspired decisions both from the cockpit and the pit wall.

But let’s leave the last word to Michael and his favourite adjective:

“The fact that I will also take part in my 300th grand prix at Spa was somehow almost inevitable and we will have to celebrate it in the right way. I’m proud to be just the second driver in the history of the sport to reach this milestone and there’s no question that we are looking to have a particularly nice weekend.”