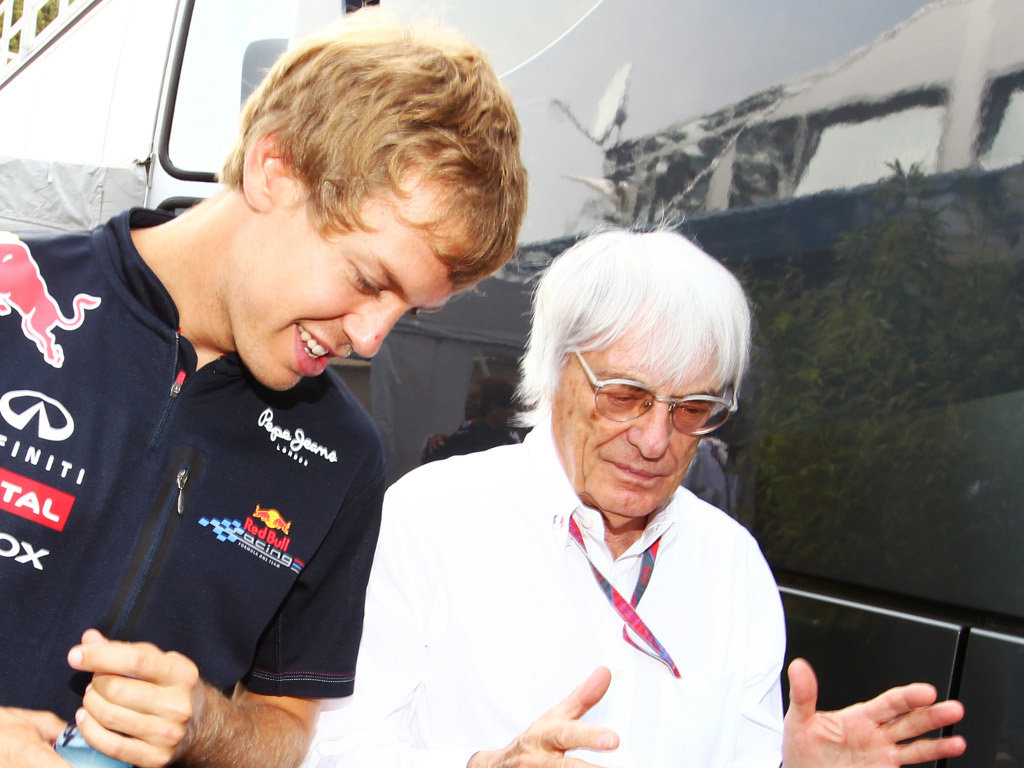 Bernie Ecclestone says Sebastian Vettel is the favourite to win this year’s World title, which would be his third successive triumph…

Bernie Ecclestone says Sebastian Vettel is the favourite to win this year’s World title, which would be his third successive triumph.

Only twice in Formula One’s history has a driver won the title three times in a row. Juan Manual achieved it in the 1950s when he claimed four in a row while Michael Schumacher managed it in the 2000s, winning five consecutive Drivers’ Championships.

This season, though, Ecclestone reckons Vettel in on course to add his name to that list and in doing so take another step towards Schumacher’s record of seven World titles.

“My guess is that he really can do it again. What points against it?” the 81-year-old told the official F1 website.

“I think anything else would be the surprise. The pre-season tests spoke a quite clear language: the Red Bull looks super competitive again – and Sebastian is only 24, so he still has an enormous potential to fill.

“Realistically, everything points to Sebastian. He’s got it all: talent, passion, zeal, a clear head – and he hates to lose.

“I could imagine him beating Michael’s record. Only in backgammon does he need to put in some extra training, but he’s learning with every game! (laughs).”

But while the F1 supremo believes Vettel is the favourite, he is still hoping that the Red Bull driver’s rivals put up more of a challenge than they did last season.

“I hope that McLaren is faster than at the start of last season and able to fight for wins right from the first race,” he continued.

“Mercedes is looking pretty competitive, so I have them on my watch list. That leaves me with the hope that Ferrari will catch up soon.

“If I were to bet now, it would be Sebastian World Champion, Mark Webber second and one of the McLaren’s third, probably Lewis Hamilton.”

Asked for his thoughts on Ferrari, who struggled last season and look set to do the same again this season prompting calls from fans for team boss Stefano Domenicali to step down, Ecclestone said: “Ferrari’s problems have nothing to do with the team management. I am absolutely sure about that.

“I see problems on the technical side – in the aero department. Instead of firing someone they rather should hire someone – Adrian Newey!”

Ecclestone also gave his views on Schumacher, who he says is “still a big name and we all profit more from a successful Michael Schumacher than from a beaten one” and the returning Kimi Raikkkonen, who he hopes “can keep up his motivation. For the moment he seems to be super motivated. Let’s hope it stays that way.”