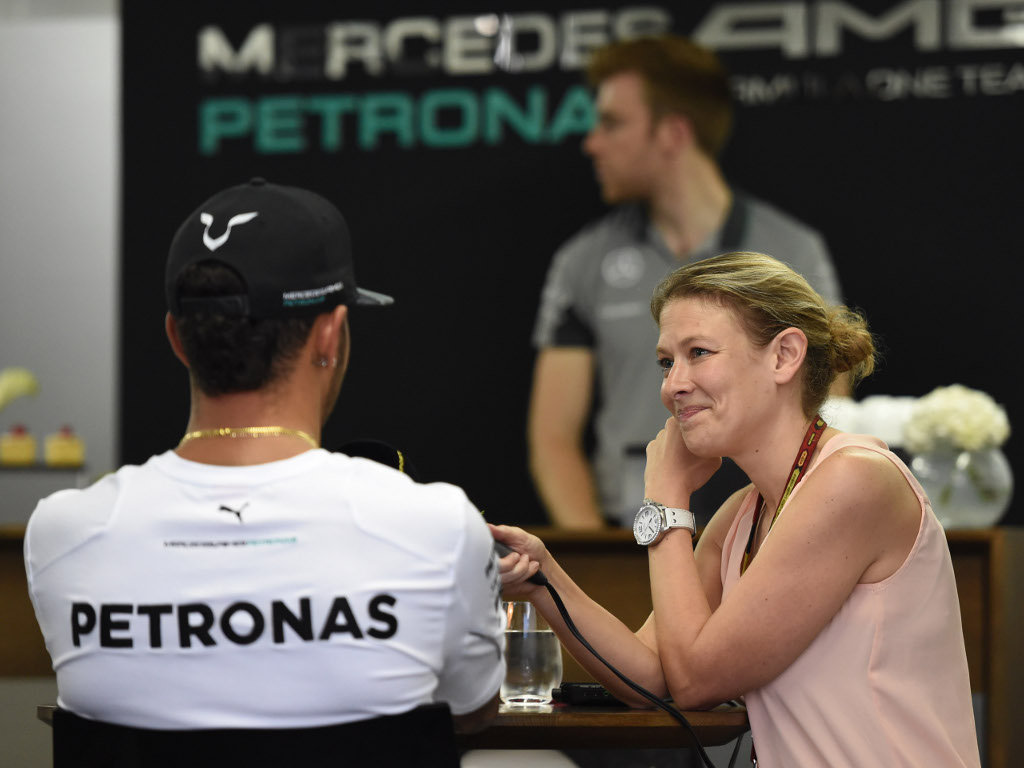 The BBC Radio 5 coverage of Formula 1 led by Jenny Gow never fails to be entertaining.

She’s aided by commentators James Allen and Jack Nicholls, along with Three-Times-Le-Mans-Winner Allan McNish and occasionally former Toro Rosso press officer Eric Silbermann. Given the ocean of time they have to fill during GP weekends it’s not surprising they have the odd comedy moment, both intentional and unintentional…

James Allen: “I’ll go for Alonso, you’re going for Ricciardo, Allan. Who are you going for, Jenny?”
Jenny Gow: “I’m going for an umbrella.”

James Allen: “Button has managed to get ahead of Alonso and Hulkenberg so hats off to the McLaren hospitality team…sorry, the strategy team.”

Eric Silbermann “It always worries me that Sergio Perez looks like a NASCAR driver with the hat he wears.”

Jenny Gow occasionally fixes on a word, and in Australia she liked the sound of “gambit”:
“There we are – Nico Rosberg in the opening round – he sets out his gambit.”
“For the first opening gambit of a new era did you think it went pretty well?”

James Allen “We look at Toro Rosso team principal Franz Tost looking up at about 14 data screens. Does he understand all that, Eric?”
Eric Silbermann: “Every team principal understands everything about everything in F1. That’s the golden rule…” (said with the Martini driest of wits)

Jenny Gow “People are running around me, down to the podium situation.”

Jenny: talking about Kevin Magnussen
“He’s got his head firmly bolted on to the rest of his shoulders.

James Allen “And he goes comfortably…well, I say comfortably fastest, it’s actually three thousandths of a second, that’s about the length of a paperback book.”

Jack Nicholls: “Giedo van der Garde is alongside me in the commentary box. He may be Dutch but he does know that points win prizes.”

If you wanted to have a Carry On, “oooh-er-missus” moment in your quote collection you should look no further than Allan McNish who was talking about Kimi Raikkonen’s big problem: “He needs to be able to feel it going in, which is what he hasn’t been able to do this year.”
Kimi’s problem on turn-in with the Ferrari F14T.

Jenny Gow posing a question to Red Bull boss Christian Horner. “Engines, what can you do about them? This is the 17th race of the weekend…”

Jenny Gow describing Romain Grosjean’s Lotus E22 with the cover off.”It’s like the Terminator getting undressed – there’s about 25 tubes coming out of the side of the car.”

Eric Silbermann “It’s ironic when this season started Luca Montezemolo was talking about ‘taxi drivers’ driving round saving fuel, the only person leaving in a taxi is Luca Montezemolo.”

In Hungary Jack Nicholls got tangled up with the hardest brake supplier on the grid to pronounce at speed. “And that was Ricciardo Campetto from Brembo Bakes…”
James Allen probably needed the word ‘forget’ in this sentence. Talking about the final race of the season at Interlagos: “I was here on the final day of the season in 2008 – a day I’ll never remember.”

Eric Silbermann in response to the question about how the stewards judge what is and what isn’t driver coaching: “Maybe we should bring someone along from the old Jim Russell driving school at Snetterton to get his training manual out to work out what is coaching and what is not.”

James Allen does Yoda
Occasionally James Allen will slip into the persona of the much-loved ancient Jedi master. In Monaco he was talking about Nico Rosberg’s driving style: “So smooth, so easy for Rosberg he made it look.”
And then…

James Allen “Nico Rosberg, 24 laps he has done on those tyres.”