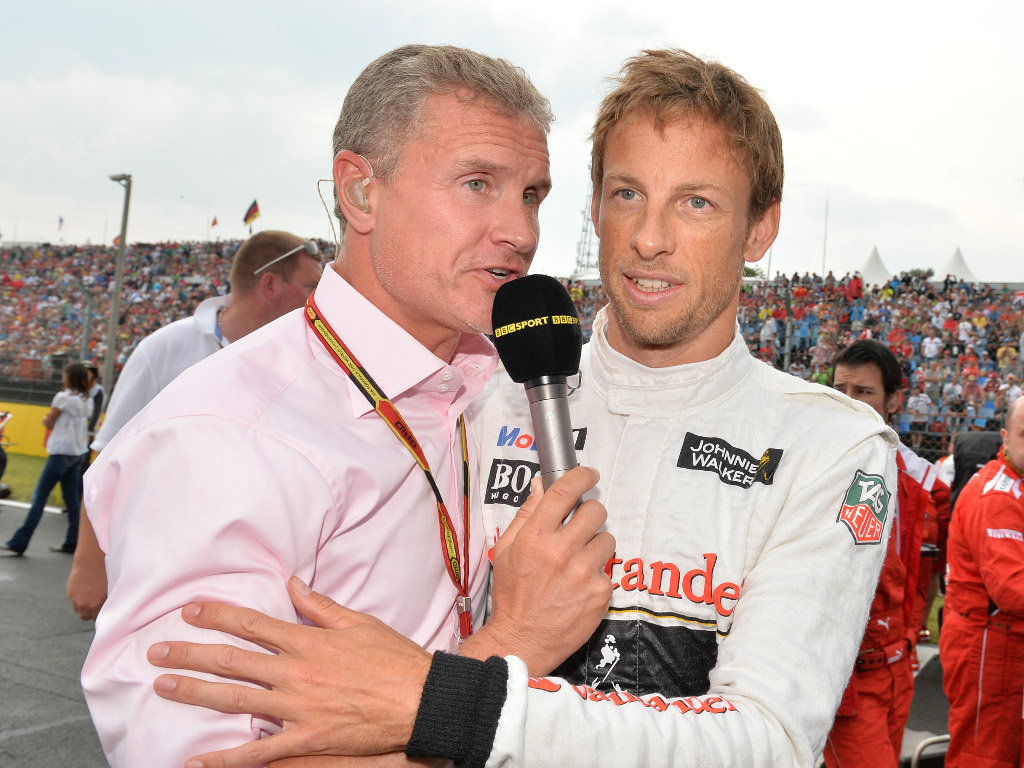 David Coulthard is the steady hand in the BBC commentary team, but things go haywire when DC gets his trousers wet…

Andrew Davies has been through a year’s worth of random DC quotes from his Media Watch section in ‘Winners and Losers’ and ‘Team-Mate Wars’ and rounded up the best ones.

At the USGP David Coulthard chucked in a reference to the old 1990s Harry Enfield comedy show. Harry and Paul Whitehouse played two sad former Radio One DJs known as ‘Smashy’ and ‘Nicey’ who addressed each other as “mate” all the time. So after the word “mate” was used several times on team radio David said: “All these radio messages are getting a bit Smashy and Nicey.” Gloriously, he didn’t bother to explain it and Ben Edwards just carried on with the commentary. Wonder what they made of it in China?

David Coulthard: Talking about the kind of gear everyone should be wearing in a rain-sodden paddock. “You’re more likely to see me in my speedos in the paddock. How about that…is that a bit scary?”
Suzi Perry: “Yes.”

David Coulthard: “Ron Dennis once said it’s better to keep your mouth shut and let people think you’re stupid, than to open it and confirm you are.”

David Coulthard: “There’s no space for headless chickens in an F1 garage.”

David Coulthard showed that he’s well in touch with British culture commenting on Benedict Cumberpatch’s surprise at being filmed in the Mercedes garage while watching the GP: “I wonder what happens when he’s watching himself on Dr. Who at home…”
Ben Edwards, who doesn’t live in a tax haven, quietly let him know that he was Sherlock, not The Doctor.

At the Japanese Grand Prix David Coulthard: said very drily: “Standing water and gravel – none of that really helps you.”

Also just before Qualifying in Japan David Coulthard: : “I think Williams have every chance of banging it on the back row…I mean second row.”

David Coulthard: talking about how physically strong drivers have to be, particularly Daniil Kvyat: “This isn’t a Mr. Universe competition, this is a driving skills competition.”

David Coulthard: “It’s difficult to win, even in a winning car.”

The BBC team were keen to take on the Ice Bucket Challenge at Spa, but it came one day earlier than scheduled. In Qualifying all hell broke loose when the sky went dark and the heavens opened up on Suzi, EJ and DC
Eddie Jordan: “I’m not sure what’s going on here, is it hailstones, or maybe it’s the end of the world?”
Suzi Perry: “And I’m going to spend it with you…?”

When it started to tip down, DC and Suzi had been talking about the Mercedes team orders at the previous race in Hungary. DC: “At this moment in time, with my trousers soaking wet, I don’t care what language Mercedes delivered the teams orders in…”
…And there was also BBC R5 live:
James Allen: “I’ll go for Alonso, you’re going for Ricciardo, Allan. Who are you going for, Jenny?”
Jenny Gow: “I’m going for an umbrella.”
Before the Italian GP at Monza, Suzy, Eddie and DC took three Fiat 500s on the Monza banking for a film item. Parked on the very steep banking, Eddie couldn’t get out of his car while DC could. Eddie: “David’s got long legs, he’s a bit of an orango-me-tang!”
Suzi Perry got an STBO award for talking to David Coulthard about the Mercedes drivers before the Singapore GP, she asked: “David, realistically, these two – isn’t it going to come down to the fact that it’s one or the other…?”