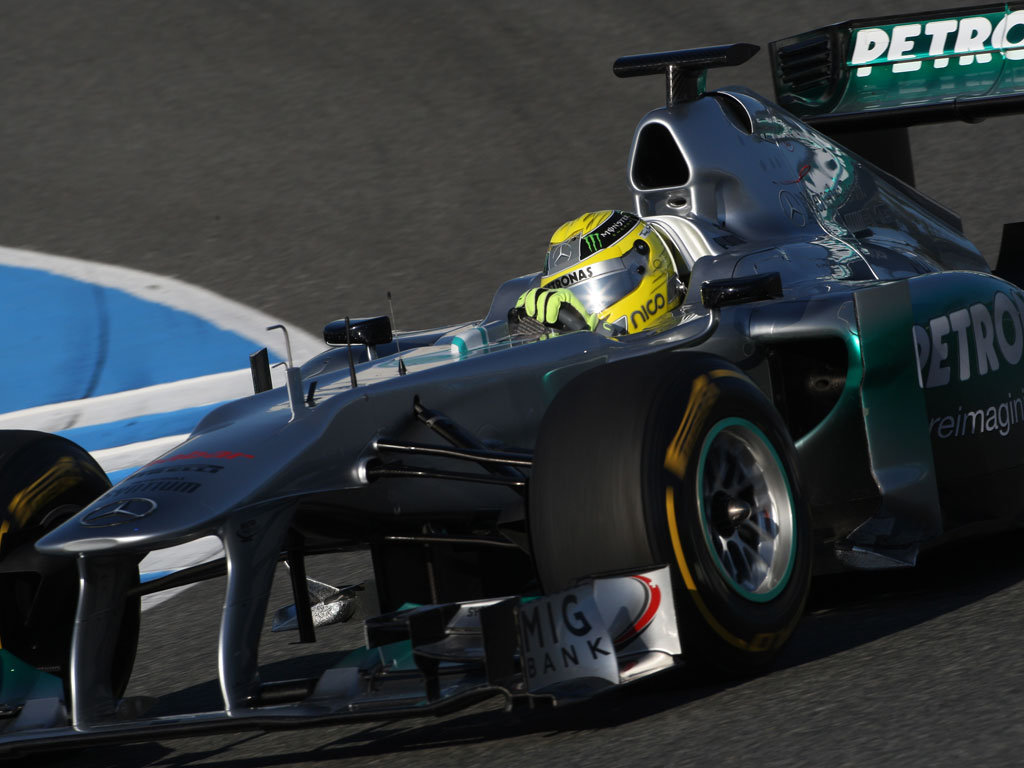 Mercedes GP’s 2011 challenger once again upstaged the new cars on day three of the pre-season test in Jerez with Nico Rosberg topping the timesheets.

World Champion Sebastian Vettel, Fernando Alonso of Ferrari and McLaren’s Lewis Hamilton were all in action for the first time on Thursday, but it was Rosberg who took the P1 honours with a blistering time of 1:17.613.

It was the second consecutive day that Merc set the pace after Michael Schumacher posted a 1:18.561 on Wednesday. With the team opting to skip the fourth and final day of testing on Friday, it was also the perfect send-off for the W02 as Merc will introduce their 2012 challenger ahead of the next test in Barcelona.

Lotus also continued their keep up with the pace at the front as Romain Grosjean led the way in the 2012-spec cars. The Frenchman was the early pacesetter before Rosberg blew everyone away with his 1:17 mark. Grosjean’s best effort in his E20 was 0.806 slower than that of the German..

After watching from the sidelines on the first two days, Vettel, Alonso and Hamilton finally got a taste of the action. Vettel put his RB8 in third place with a 1:19.297, but Hamilton was just under two tenths off his time.

Alonso and Ferrari didn’t have the smoothest of days as the Spaniard spent nearly two hours of the morning session in the garage with a hydraulic problem.

Things went a little better in the afternoon and, with Ferrari focusing on data collection and not times, he finished seventh but put in some consistent times on the medium Pirelli tyres.

Thursday proved to be a fruitless day for Force India after reserve and test driver Jules Bianchi had a shunt early on. Although damage to the VJM05 was not severe, the team were forced to skip the rest of the day due to a lack of spare parts.

“It was just a small mistake from my side,” Bianchi told ESPNF1.

“Some wheelspin with cold tyres and I went into the gravel and touched a little bit the rear wheel and damaged the car a bit. I’m very sorry for the team because it’s had to do a lot of work for a small mistake. I’m really sorry about that.”

Caterham reserve Giedo van der Garde also had an excursion off the track, but his CT01 wasn’t damaged.

Meanwhile, Jean-Eric Vergne and Bruno Ssenna made their official debuts as they drove for Toro Rosso and Williams respectively.

Vergne’s team-mate Daniel Ricciardo impressed on the first two days and the Frenchman proved that there is plenty of pace in the STR7 as he finished fifth while Senna was the busiest driver on the track, having completed 125 laps.

Only 10 teams are in action after HRT decided to back up and head home after Wednesday. Marrusia, meanwhile, skipped the session altogether.