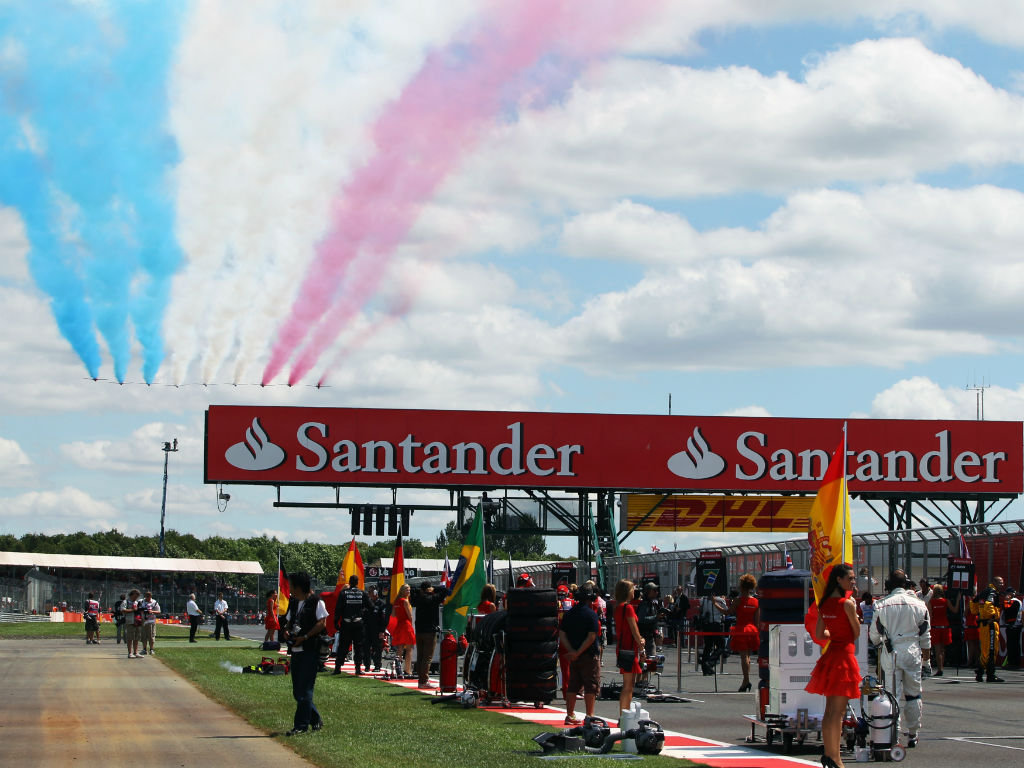 With Red Bull scorching off into the distance in Valencia, everyone’s waiting to see if they can do the same at Silverstone…

And so to Silverstone, location of the very first F1 Grand Prix and up to the late 1990s, still with the same camping facilities.

The British Grand Prix has given us some epic races over the years, the drivers like it because it’s fast and flowing and if you go off, it’s a long time before you hit anything. Here’s one driver waxing lyrical about his Silverstone experiences of old.

“When I first raced there it was my real favourite. It’s so fast and demanding which makes it very challenging. The corners really flow and it’s all about long, sweeping high-speed corners and high downforce levels. Somehow it has been a good circuit for me since the very beginning. It will be interesting to see how the new section changes a lap, but I’m sure I’ll learn it very quickly.”

Phew, he’s a bit enthusiastic. Any guesses so far? How about this…

“It’s always such a good feeling going to Silverstone. I have a long history here. It was the real base for the start of my international racing career in Formula Renault in 1999 and 2000. Since then I’ve always enjoyed racing at Silverstone. I don’t know why; there must be this nostalgic feeling that I have every time we go there. I’ll enjoy the weekend whatever the weather will be…”

Yes, it’s Kimi Raikkonen, getting all excited about going back to scenes of early triumph, in the days when he didn’t mind coming second so much.

Silverstone means a lot of different things to lots of drivers. For Michael Schumacher it was where he broke his leg and also won a GP serving a drive-through penalty. For Felipe Massa it’s a place where he once spun four times in a race. For Fernando Alonso it’s where he won last year, the 2011 Ferrari liking the high speed corners and thought to like them this year with the F2012.

For Jenson Button it was a botched pit-stop that ended his 2011 race and remarkably Jenson has never finished on the podium in Britain since he started in 2000, even in 2009 when he won the World Championship. He thinks that after Valencia, where he showed signs of getting to grips with the McLaren, he’ll be back as a contender.

Lewis Hamilton has spent almost two weeks defending driving normally at the European Grand Prix and getting hit by an idiot on the penultimate lap. Had the overtaking car been Alonso, Vettel, Button, Massa, Webber, Schumacher, Rosberg or Raikkonen then he wouldn’t have been hit. No justification necessary.

Last year Lewis was involved in a last-corner clash that saw him sneak past Felipe Massa, but neither will want to be losing bodywork in 2012. Eyes will also be focused on the McLaren pit crew. At the European GP they performed a record breaking pit-stop in 2.6 seconds. But they also dropped Lewis’s car when it hit the front jack too hard. Very soon they’ll be a force and not a liability.

The two biggest questions coming into the weekend are:
a) When is it going to rain?
b) Will Red Bull have their Valencia edge?

What was astonishing about the European Grand Prix was how much quicker Sebastian Vettel was than everybody else. In the early stages he opened up a gap at almost two seconds a lap and his tyres didn’t suffer later on in the stint.
Vettel was two seconds ahead of Hamilton’s McLaren at the end of the opening lap then, on consecutive laps, 4.0, 5.3; 6.8; 7.6; 8.6; 9.2; 9.6; 10.1, 11.4. When Grosjean got past Hamilton the gap still grew.

Silverstone may be a completely different… but it may be even worse for the other teams. High-speed turns used to be the things that Red Bull did best. Mark Webber is pretty handy around Silverstone too, so he could end up in front of Sebastian. (When he’s not putting on glove puppet shows that is). Should it rain – sorry – when it rains, Mark might just have the edge. Last year he was intent on having some fun towards the finish, closing on Sebastian, when a nervous Christian Horner came on the radio to say that he rather liked the positions as they were.

That race had started in the damp and that could be the order of things this weekend with cool, changeable conditions bringing rain on Saturday and maybe Sunday too. Lotus may not do cool circuits very well, but Mercedes like them. They didn’t do too well on the high speed circuit of Montreal but their double DRS may be better suited to Silvertone.

As usual we could see drivers from Red Bull, Ferrari, McLaren, Lotus, Mercedes, Sauber, Williams and Force India get into Q3. Force India had a great race last time out and with PaulDiResta fans in attendance and the factory next to the circuit, it will be very much a home race for him.

Marussia will be bringing their major upgrade to the race and not before time, having slipped behind HRT in Valencia. It will be difficult to concentrate on the job at hand with test driver Maria de Villota injured this morning. If that isn’t a spur to Charles Pic and Timo Glock, to perform it’s hard to know what is.

However most in the pitlane will be holding their breath to see just how fast the Red Bulls are and if this unpredictable season has just made a lurch towards the predictability of 2011.