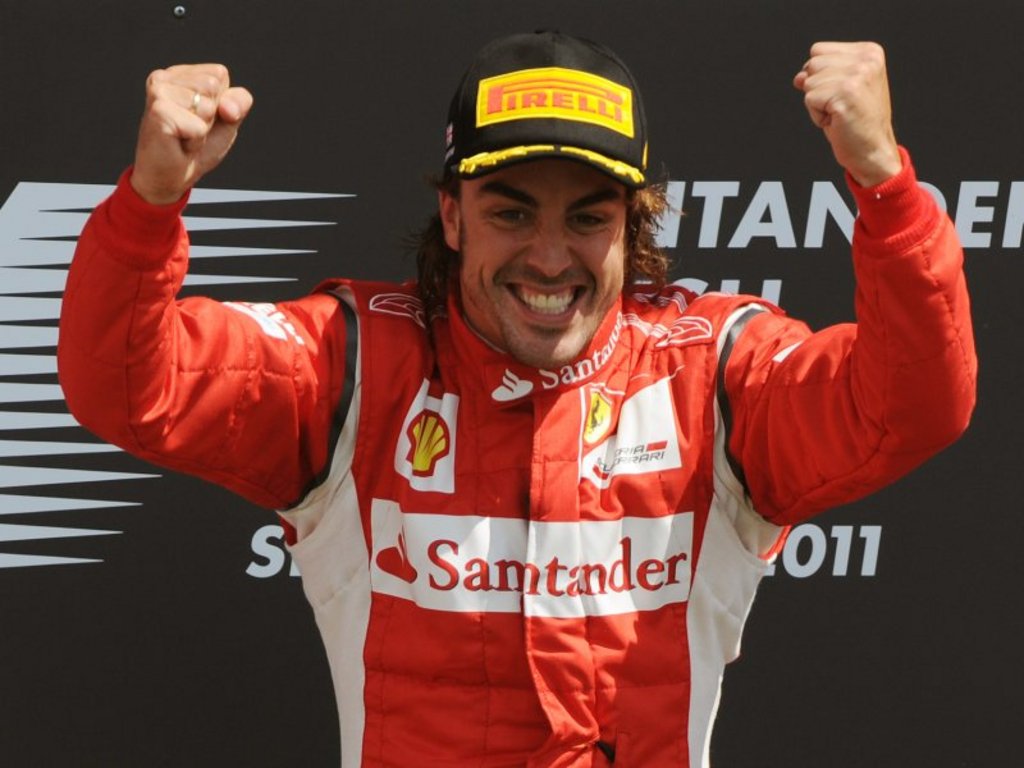 At last, the Italian national anthem again. And it’s not likely to be for a driver, is it…?

Star of the Race
Fernando Alonso, Ferrari, 1st
And it could have all gone so horribly wrong… had the gravel on the outside of Brooklands not been so driveable (for a few seconds it looked like he might have bogged down) in qualifying on Saturday, Fernando Alonso could have been starting the race from P17. As it was he was able to show that the Ferrari 150 Italia is more like a Paris-Dakar machine and bounced his way to safety. And then claim P3.

He also took advantage of the latest F1 politics that have limited off-throttle gases. If indeed it was Ferrari and Sauber-Ferrari that have refused to go back to the Valencia engines arrangements, which was proposed by the FIA on Sunday morning, then that it is the copper-bottomed answer to the question: Who has been pushing for a re-interpretation of the rules?

Ferrari were already making progress in their bid to nullify Red Bull’s advantage and so it’s a pity that Alonso’s win will now be mired in that debate. Because Alonso looked very strong regardless of Red Bull’s race mistakes and failings. While he sailed past Lewis Hamilton, Sebastian Vettel could only follow. He may not have made a racing pass of Vettel and been handed the lead by Red Bull’s rear jacking problems, but he looked capable of grabbing it for himself if necessary.

He was also sensible enough not to get fazed by Lewis Hamilton overtaking him. Fernando plays the long game so much better than Lewis. I, for one, am more than happy not to hear the Austrian national anthem for a change on Sunday afternoon.
We’ve heard the Italian one second for so many years that it’s like a familiar theme tune to Sunday afternoons and it’s comforting to have it back. Not for the rest of the season, mind.

Overtaking Move of the Race
Lap 15: Lewis Hamilton, McLaren on Fernando Alonso, Ferrari
For those of you who have stood on the outside of Copse and watched F1 cars go through at 185mph, the overtaking moves that Lewis Hamilton pulled off on Alonso and Michael Schumacher did on Petrov were simply stunning. On television they looked good, but not as spectacular as they would have done in the grandstands.

Hamilton had the same tyres on as Alonso and the same tyre wear, no DRS but absolutely blitzed the Ferrari – going off the racing line on the turn-in to Copse and taking a wettish line through the turn, but still keeping control and keeping in front.

Michael Schumacher did pretty much the same on his nemesis Vitaly Petrov (this race he was also busy seeking out a change-of-nemesis in Kobayashi) though that was only for P15 and I’m not sue if there was a tyre mismatch, Michael having stopped earlier and been out of phase with most people.
Both were the moves of inspired drivers.

Winners
Sebastian Vettel, Red Bull, 2nd
The great news as far as Sebastian Vettel is concerned is that he now knows that Mark Webber will be acting as his domestique in future races. He also knows that despite the worst the FIA could throw at his blown floor he can pretty much keep pace with Ferrari. Even if the ban is upheld, Red Bull will find ways of getting back some of their lost time. Also, this was a race where Ferrari didn’t have to go onto the hated Pirelli hard tyre which they don’t perform well on, and which will figure in future races. A third second place in 2011 isn’t exactly slumming it.

What Seb detractors will possibly seize upon is his inability to get past a wily Hamilton. That more than anything else ruined his race. He certainly lost more seconds behind the Mclaren than he lost in the pits.

Mark Webber, Red Bull, 3rd
Hands up those who wanted to be in the Red Bull debrief…? Right, so that’s all of you. Mark Webber had a good race and a poor start – the fourth pole position that he’s failed to convert into a win. What was magnificent was that he didn’t give up and pressured his team-mate right till the end.

Lewis Hamilton, McLaren, 4th
Lewis had a great race. Wait for it. He was careful on the first lap and still picked up places. His therapist is going to be so pleased with him for that. There was the usual frosty/arsey interchange with his engineer through the race. Lewis doesn’t like receiving information he doesn’t want to hear and it was no different at Silverstone. It may well be a good idea for McLaren to draft in Jo Frost – Supernanny – to manage future communication. (How big will that naughty step be…?)

He was very quick at various times through the race and defended brilliantly and fairly. His last corner defence of fourth place was fantastic to watch and exactly what Massa deserved.

And his jokes to Lee McKenzie are definitely improving – “I’ve got a platinum card for the stewards’ now. I’m going straight there,” was a belter.

Nico Rosberg, Mercedes, 6th
If Nico’s got serious World Championship ambitions, he’s going to have to look to his form in mixed conditions. He recovered from a pretty bad opening lap to score some good points. Significantly, more points than Renault. However it has to be said that he gained advantage of his team-mate battering Kobayashi out of the way, Paul di Resta being allocated Adrian Sutil’s tyres and Jenson Button’s wobbly wheel.

Nick Heidfeld, Renault, 8th
Ditto Nick. Although Heidfeld did have the cahunas to be the second driver in for slick tyres.

Michael Schumacher, Mercedes, 9th
Ah, what might have been. Considering the strife Michael went through, he did pretty well to finish 9th. You have to say having Michael around is never dull.

Tourettes Kravitz
Three cheers for Ted, who asked some totally non-bogus, questions to Christian Horner after the race. Having Ted poke a microphone in your face after a tense finale in which you’ve asked your driver five times to hold position and he’s ignored the call, demanded a great degree of self control from Christian Horner.

Losers
Felipe Massa, Ferrari, 5th
Unusual to see Massa lose places off the start line but quite familiar to see him steering his car towards drivers trying to overtake him. His attempt to run Jenson Button off the road between Stowe and Vale typified the desperation he shows in such situations. If Button hadn’t moved onto the kerb the two would have collided. It’s an accepted part of F1 that if you put your car on the outside of a bend going into the turn, then you might get squeezed out. But not on the following straight. As it was, the McLaren driver nailed it, after which Massa dropped back.

His late race charge came unstuck when he tried to drive round the outside of Lewis Hamilton and turned in too sharply. What would have been interesting for the stewards is if he’d crosed the line first having just got back on the