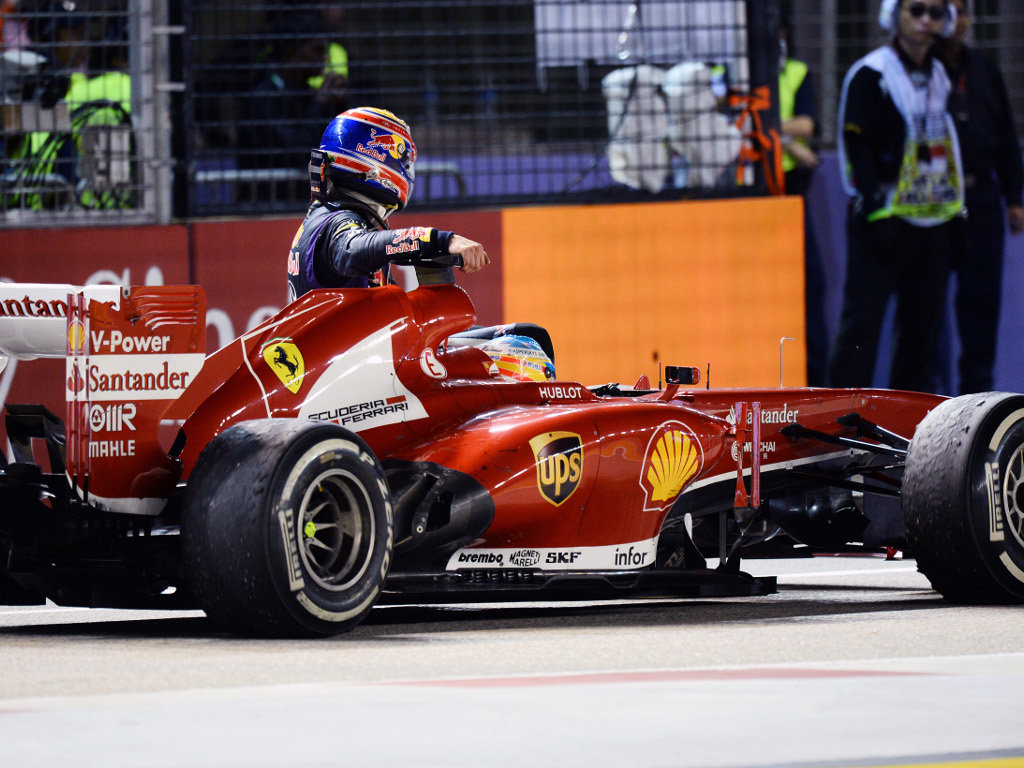 Mark Webber was “frustrated” after his third reprimand of the season resulted in a 10-place penalty for the Korean Grand Prix.

In what was arguably the highlight of Sunday’s Singapore Grand Prix, the Aussie caught the world’s most expensive taxi back to the pits after his own car caught fire.

Webber was forced to park his RB9 on the final lap of the 61-lap grand prix and was given a lift back to the pits by good mate Fernando Alonso, sitting on the side of the Spaniard’s Ferrari.

But rather than enjoy the moment, the stewards handed both drivers a reprimand; Alonso for driving in a “potentially dangerous” manner and Webber because he “entered the track without the marshal’s permission.”

And as it was Webber’s third reprimand of this season, the 37-year-old was hit with an automatic 10-place grid penalty for the next race, the Korean Grand Prix.

“There’s not much I can say about that,” Webber said. “It’s very frustrating, but the stewards have made their decision.

“It’s now going to compromise my race in Korea, which is tough to take.”

The Aussie, though, wasn’t the only member of Red Bull venting his frustration as team boss Christian Horner has questioned the “sense” of the penalty.

“Drivers have given others lifts home in previous years – it happened the other way around with Mark and Fernando somewhere else,” he said.

“One of the most iconic images I can remember is of Nigel Mansell giving Ayrton Senna a lift home (1991 British Grand Prix).

“On this occasion it was good for the show, it was good TV, and it should have been dealt with a fine or a slap on the wrist.

“What’s a shame is that it’s ended up in a reprimand, and because it’s the third it means a 10-place penalty.

“Unfortunately, reprimands are the only things now available to the stewards, and perhaps in this instance talking to the drivers would have sufficed.

“Ideally, a fine would have been better, but I don’t think that’s something that’s available to the stewards now (teams and not drivers can now only be fined).

“It’s frustrating because it now puts Mark on the backfoot in Korea, and that’s the bit that doesn’t really make sense.

“But I understand the difficulty the stewards have with the penalties they have at their disposal.”