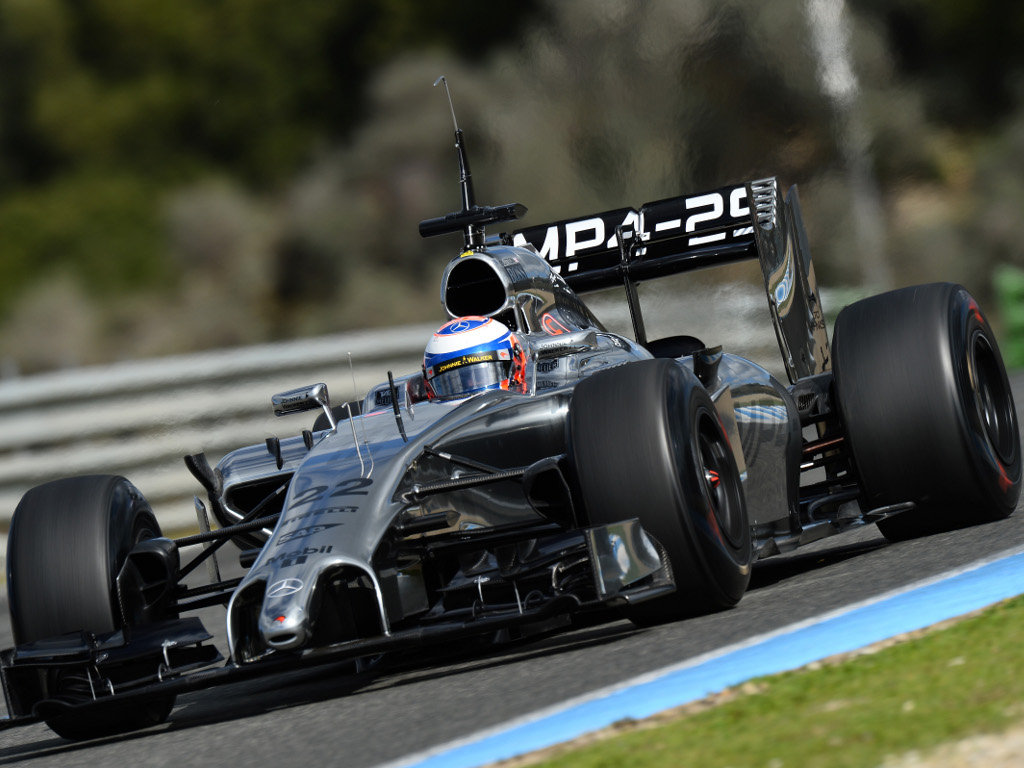 Despite missing out on any action the previous day, Button came out firing in the official wet-weather running on Wednesday morning, completing 43 laps in his MP4-29 and setting the fastest lap time in the early stages.

The track was allowed to dry in the afternoon as the drivers switched tyres accordingly, allowing Button’s former team-mate Sergio Perez in his Force India to come to the fore – though the Mexican would break down on Turn 1 after completing a number of quick laps to bring out the red flag.

Earlier, Sauber’s Esteban Gutierrez also caused the red flag to come out after spinning into the gravel at Turn 5.

Marcus Ericsson’s Caterham would cause the third red flag situation as the day’s action winded down, but there was enough time for Button to get back out on track and top the timesheets once again.

His time of 1m24.165s on Pirelli’s medium tyre would not be surpassed.

Despite finishing fourth with a 1m25.588s on the normal Pirelli hard, Rosberg enjoyed a highly productive day, completing a marathon 97 laps – more than the amount completed by all the drivers involved in Tuesday’s testing combined – including a final run of 24 straight laps.

Raikkonen had the highest number of laps after Rosberg, but he was still well down on the Mercedes driver’s tally.

Perez managed to set the fifth fastest time before his day ended prematurely, notably much quicker than sixth-placed Esteban Gutierrez in his Sauber.

Teams with a Renault engine all struggled on the day, a suspected energy store issue the culprit. Only Caterham’s Ericsson managed to get his lap count into double figures – though he could not get within 14 seconds of Button’s time over his 11 completed laps.

Vettel was eighth quickest on the day, but managed only eight laps as a result of the Renault battery problem. Following the three laps they managed on Tuesday, it has not been a particularly productive test for Red Bull so far.

Of the remaining teams, Toro Rosso did not make it out on the day, while Marussia took delivery of its car towards the end of proceedings and hope to run on day three.