Home Uncategorized Button: Lewis had an easy ride this year 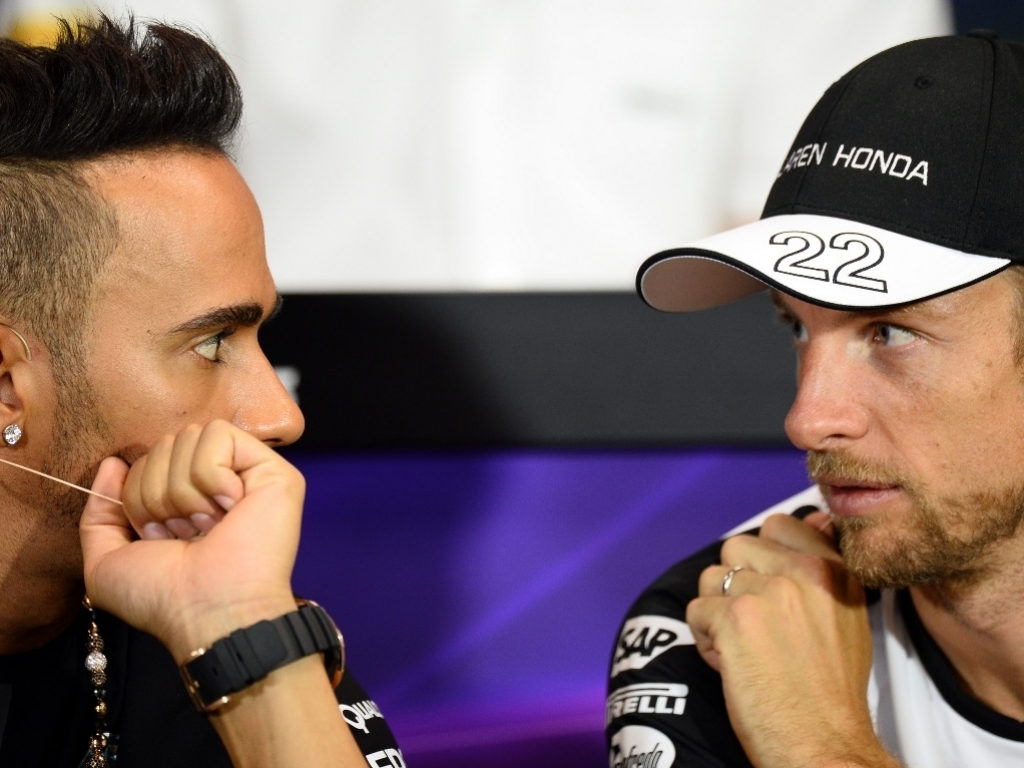 Although he concedes Lewis Hamilton "has been on top of his game", Jenson Button feels the double World Champion hasn't really been tested this year, adding "everything fell into his lap" at Mercedes.

Hamilton is on the verge of joining the likes of Niki Lauda, Sir Jackie Stewart and Ayrton Senna on three Drivers' Championships as he only needs to lead home another Mercedes 1-2 in Austin this weekend.

And no one can deny that the 30-year-old would deserve the title this year as he has won nine of the 15 races while his Merc team-mate Nico Rosberg and Ferrari's Sebastian Vettel shared the other six wins.

Button, though, feels Hamilton has been able to "learn on the job" this year as he hasn't had enough competition.

"Lewis has had an easy ride this year," he is quoted as saying by The Guardian. "That’s definitely helped. He’s definitely learned along the way.

"His first year with Fernando Alonso [in 2007] in F1 was just the best year for him, because he had no weight on his shoulders, no pressure, nothing. He could just go out there and do his thing. And he did."

After narrowly missing out on the title in his debut campaign, he eventually won it with McLaren in his second year in 2008 before he moved to Mercedes ahead of the 2013 campaign.

He finished fourth in the standings in his maiden year with the Brackley-based squad before winning the title in 2014 and Button feels "everything fell into his lap" with Mercedes dominating the past two years.

"Lewis has found himself in a good situation with Mercedes," he said. "I don’t think he judged that. Everything fell into his lap, but it happens. With me, at Brawn, I knew the car was going to be good but I pushed for it. You find yourself in a situation with a good team and a good car and it is up to you to get the best out of it.

"It wasn’t a perfect year last year but he got over the issues and came back with the championship. I said at the end of 2014 that he would come back and annihilate the Championship. He has come out and really done it. Look at qualifying. He has been on top of his game and done a great job."

Rosberg has been Hamilton's main title rival the past two years, but Button feels his compatriot would prefer it if the challenge came from driver in another team.

"I am sure Lewis would like, as all of us would, another team to fight against," he said. "It is much more fun fighting another team."

Michael Schumacher of course still holds the record for number of titles won, but Button also feels the German great won a lot of his titles due to Ferrari's superiority in that era, and Hamilton and Mercedes are in a similar situation.

"Michael [Schumacher] wouldn’t have won seven championships if he hadn’t been in the best car," he said. "There are drivers as good as those who have won world championships but they never will because they haven’t had the right car. That’s why we need the sport to be more competitive. The driver can make a bigger difference rather than arriving at the first race discovering a car is so much quicker and no one can catch up.

"Mercedes are such a big team that no one can catch them. That is the biggest issue facing Formula One. Hopefully there will be more competition next season and then it will be more satisfying to win a world championship."