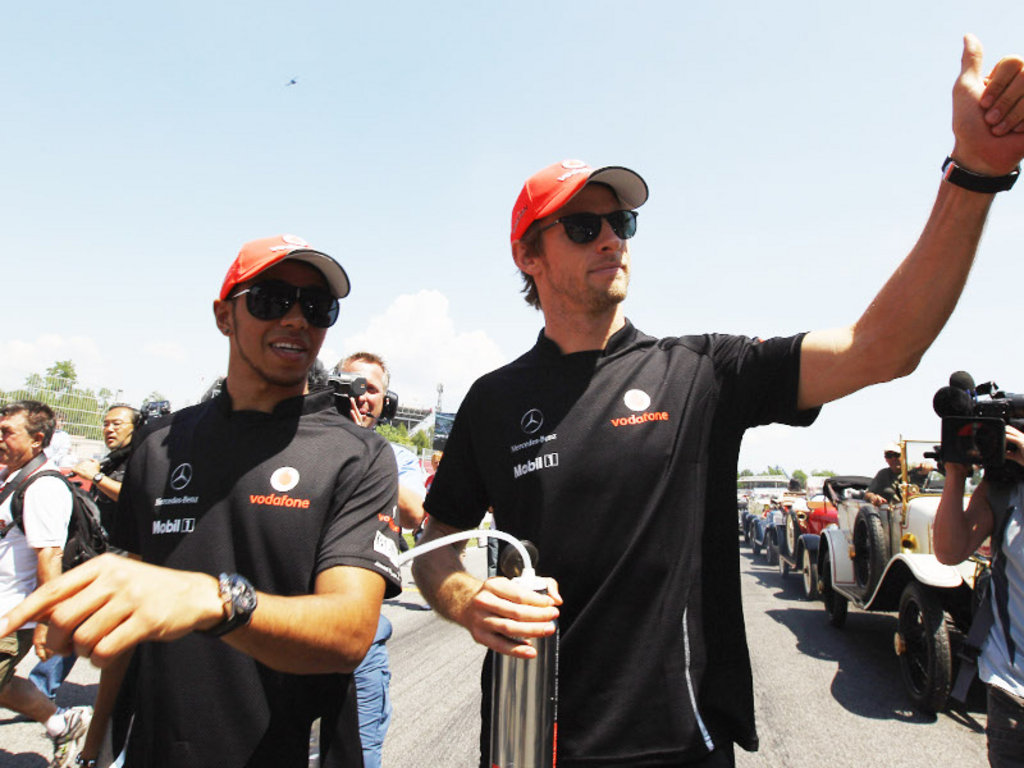 Jenson Button has launched a passionate defence of Lewis Hamilton following yet another controversial race for his McLaren team-mate.

Just a fortnight after vowing to learn from his mistakes in Monaco where he was twice penalised for causing accidents, Hamilton proved that to be a fallacy in Sunday’s crazy Canadian Grand Prix.

In the space of the first three true racing laps – after the Safety Car had led the initial four due to the wet conditions – Hamilton was involved in three separate incidents.

Initially he tagged and spun Mark Webber, then later ran wide as he attempted a pass on Michael Schumacher, before committing the cardinal sin of motor sport in crashing into his team-mate.

The accident resulted in him hitting the wall, puncturing his left-rear tyre, and although he attempted to continue, he was swiftly forced to retire.

Condemnation was equally as rapid, in particular from three-times Champion Niki Lauda who declared Hamilton to be “completely mad”, and likely to kill someone with his driving.

Despite a sixth trip to see the stewards in seven races, Hamilton avoided a penalty, and lives to fight another day in the next race in Valencia.

Unusually, the 26-year-old ducked a customary post-race interview session with the British media, not out of any anger at what had unfolded, but believing Button deserved all the limelight.

Button, euphoric following a backs-to-the-wall win, was only too happy to lend his support to Hamilton currently going through what team principal Martin Whitmarsh has described as “an unfortunate run”.

“Lewis is in the headlines a lot, and a lot of it is because he is bloody good,” said Button.

“He’s a racer, a fighter. For me that is the reason why I wanted to be here, against and with a driver that is super talented, one of the best drivers Formula One has ever seen.

“It’s good challenging him on the circuit. We have a lot of respect for each other, we’ve raced each other a lot this year, and last year, and we’ve never touched. We’ve always given each other room.

“For me that’s a great position to be in.

“So I don’t agree with what Niki has said. I think his driving style is aggressive and he always goes for gaps.

“Sometimes he’s right, sometimes he’s not, but it’s the same for all of us. He just finds himself in that situation more often than others.”

Button revealed he cleared the air with Hamilton after the race and that there is no animosity between them that could spill over at a later date.

We spoke about it, and it’s one of those things. I didn’t know he was there. He went for a move, we collided, which is sad for both of us.

“Initially it played on my mind because you never want to crash with your team-mate. It’s the worst thing to do.

“But we spoke about it, and he was very good actually. He was one of the first people to congratulate me after the race, which was really nice to see.”

It was a race of attrition for Button, not least due to the clash with Hamilton, but one in which he endured six trips into the pits – five for tyres and one for a drive-through penalty for speeding behind the Safety Car.

Then there was an accident with Fernando Alonso which forced the Ferrari star into retirement, whilst Button suffered a puncture that dropped him to 21st and last with 42 laps remaining.

But he displayed heart and bravery in fighting through to take his 10th career victory, one he has described as the best of his career.

Although trailing Vettel by 60 points in the standings, a chink in the German’s armour has appeared as he cracked on the last lap, making a mistake after having led for virtually the entire race.

“He’s still got a massive lead, but it’s nice to see him make a mistake (in a race) for the first time this year,” said Button.

“The Championship is still alive, but in fighting for a win now it is very different to when I won my title in 2009.

“Now I simply think about winning a race, not about winning the Championship. There’s quite a big gap so you have to think like that at this moment in time.”