Home Uncategorized Button: There could be chaos 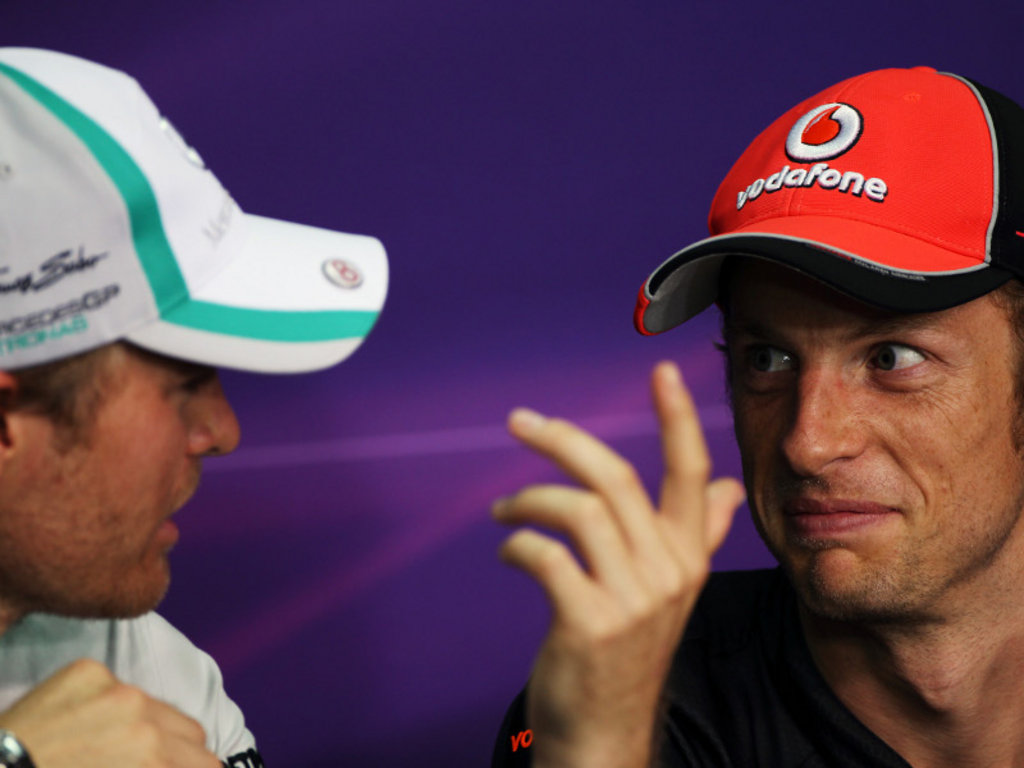 Jenson Button believes “absolute madness” could unfold this weekend if Malaysia’s notorious weather rains on the Formula One parade.
Two years ago the start of the race was switched to 4pm local time, which caused pandemonium as the heavens opened midway through the race, forcing it to be stopped after 31 of the 56 scheduled laps.
Then last year showers at the start of qualifying threw a spanner in the works for McLaren and Ferrari who badly misjudged conditions before a downpour significantly delayed the top-10 shoot-out.
With both qualifying and the race scheduled for 4pm this year, the likelihood of rain affecting either or both again is exceptionally high.
Particularly so when you consider at 4pm on Thursday a thunderstorm erupted over the Sepang International Circuit just as Button was speaking in the McLaren team building.
Throw in the still as yet relatively unknown variable of the new Pirelli tyres, and it is no wonder Button is predicting potential chaos.
“It’s going to be an interesting race even if it stays dry because of the tyres around here,” said Button.
“With the heat and humidity, and with it being a very tough circuit on tyres, then we are going to see a very different race to the last one in Melbourne (Australian Grand Prix).
“Then you chuck the weather into it and it’s going to be absolute madness.
“It will still be good, and we’re all looking forward to it because you never really know what’s going to happen.”
Button has often been praised in the past for his astute tactical awareness, notably last year when he won in Australia and China in variable conditions.
However, the 31-year-old believes trying to judge this year’s race in Malaysia will be far more difficult due to the lack of running on Pirelli’s wet tyres should the rain come into play.
“I don’t know them, I haven’t used them, so I don’t know when they are going to work or not going to work. It’s a lot trickier here,” added Button.
“I try my best to feel conditions. In China, Nico (Rosberg) and I were driving around in the wet with slicks because they were quicker than the wets. Figure that one out!
“But it was just how it felt at the time. It’s not a written rule that when it rains you have to put wets on.
“So you have to go with your instincts and feel the circuit, and hopefully that will help me here, although it didn’t help me last year because I ended up in the gravel (in qualifying).
“Generally, it maybe comes down to experience, and I don’t try to get caught up in the moment too much.”
Even if it rains there is still hardly any respite for the drivers when it comes to the heat and humidity which virtually guarantee it to be the most difficult race of the year.
“It’s pretty tough in the humidity around here, especially in a race suit,” said Button.
“Getting used to the humidity is very difficult, no matter what you do, and the heat is tough.
“So you have to be well oiled – have enough liquid inside you, and trying to be as relaxed in the car as possible is the key.
“But it’s tough from the word go because on the lap to the grid you are going slow. There is no airflow in the car and it’s very, very hot.
“Then in the race the heat means there is no cool air, and on the straights you are struggling to breathe.”
Recalling one particularly horrendous incident in a Malaysian race a few years ago, Button knows what it is to suffer on track.
“If your water system stops working you have big difficulties. I’ve had it in the past here and I started to get dehydrated,” said Button.
“You start shivering, your eyesight starts going and it can become very dangerous, so making sure your drinks system is working is very important around here.”