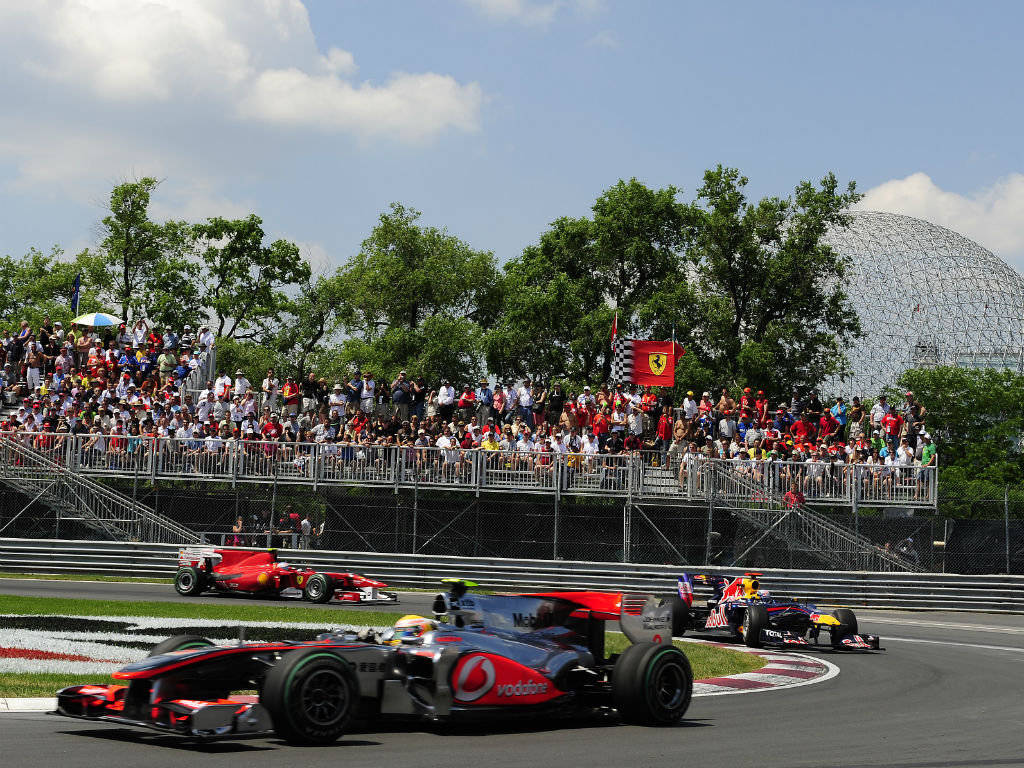 Montreal delivered another cliffhanger GP ending, with Fernando Alonso failing to hang on after his tyres went over the cliff…

Montreal delivered another cliffhanger GP ending, with Fernando Alonso failing to hang on after his tyres went over the cliff.

Star of the Race
Lewis Hamilton, McLaren, 1st
Wonders will never cease. Seven winners from seven races. McLaren fail to mess up the pit-stops for Lewis and there’s no Safety Car in Canada. What unlikely event will happen next in F1 – full grandstands in Valencia? Kimi Raikkonen gets his own F1 chatshow? Michael Schumacher finishes a race?
Lewis looked pretty determined today, judging by the average distance between his right rear tyre and the Champions Wall throughout the race. There was just one moment of weakness, his outlap after the second stop and the subsequent tour, Lap 51, which was a 1:20 second lap compared to Alonso and Vettel’s 1:18s. Had they chosen to come in then…

Overtaking Move of the Race
Lap 42, Nico Rosberg, Mercedes, on Sergio Perez, Sauber, for P7
As Sergio Perez emerged from the pits after his one and only visit to the pitlane Nico Rosberg seized the opportunity and dived up the inside of the Sauber into Turn 3. It’s never a great place to overtake safely and many people have come to grief there. As it was, the Mercedes W03 had just enough momentum to make the move stick. Nico also managed to pass Felipe Massa in a non-DRS location – which is doing it the hard way. His sixth place finish was just 0.4 seconds away from being a fifth place finish, although many were expecting Mercedes to do a lot better than they did at what is a power and traction circuit.

Winners
Romain Grosjean, Lotus, 2nd
He wasn’t that far away from Lewis Hamilton at the line either, a tremendous result, showing that Lotus really do love the heat. After the disastrous start in Monaco (and a wobble in Barcelona) Romain was on his best behaviour for this one. In fact the start of the race in Canada looked more like a classic sportscar race where nobody wants to get their expensive machinery dented, with nothing wayward or aggressive. Kobayashi was in the race. That is one of the bonuses of Pirelli, DRS and KERS because drivers think they can make up places they might lose at the start. Whereas in the bad old days of the Bridgestone era, where you finished on the opening lap roughly equated to where you would finish on Lap 70. So you had to grab as much as you could at the start.

Sergio Perez, Sauber, 3rd
Organisers of the grand prix in Austin will have been uttering thanks to the almighty following Sergio’s podium in Canada. That must surely have put another 5,000 on the gate. Perez was very patient when he needed to be, sat behind team-mate Kobayashi till Lap 24, then set PBs and edged his way forward till his stop on Lap 41. Then he unleashed the car, hustled his way past Rosberg and Massa, and made it all look very easy. A far remove from Monaco.

Sebastian Vettel, Red Bull, 4th
A fabulous qualifying performance from the always-entertaining Sebastian – “Even without the hole I enjoyed qualifying a lot.” In the race, the lack of top speed did for his and Mark’s chances. And whereas Fernando has been talking about “damage limitation” for most of the season, Sebastian provided the most fantastic example of it towards the end of the race.

Fernando Alonso, Ferrari, 5th
One more lap and it could have been eighth place for Fernando, not fifth, so it could have been better and it could have been a lot worse. He knows full well that they threw away a podium place by not taking the pit-stop but credit to Ferrari for going for it. “We put the coin in the air and it did not work.” Though it’s difficult to see the team going for the win-or-nothing option again in a hurry unless it was at Monza where a win in front of the tifosi is the ultimate. Apart from that he had a great race pushing Hamilton all the way and never coming under serious threat from Vettel when their tyres were on a par.

Losers
Mark Webber, Red Bull, 7th
Mark was very downbeat after his seventh place finish, in fact a lot more depressed than 16th place Jenson Button turned out to be. True he had to speak to my old F1 Racing magazine mucka Tom Clarkson and if you had the choice of speaking to Spanish reporter Laia Ferrer or Tom you really would want to move swiftly down the line of reporters to try out some faltering Espanol while Laia flickered her eyelashes. Tom saved his best question up for Sebastian Vettel, though.
“Sebastian, first to third, do you think you could have done anything different?” To which the obvious answer was: “Maybe count the number of cars in front of me…”

Jenson Button, McLaren, 16th
Jenson has set his heart on becoming the new Felipe Massa. 1st and 16th (for McLaren) with no obvious damage or mechanical failure for Jenson is a bit worrying

Michael Schumacher, Mercedes, DNF
Five DNFs in seven races is not a good record. Back in his Ferrari days when he was winning multiple World Championships for the Scuderia it always used to be Rubens Barrichello who got the bad luck and rarely Michael. This is almost like an evening up of the bad karma. It was surprising to see the Mercedes team release Michael back onto the track with a DRS that was stuck open. You get jumped on pretty hard for an unsafe release with a car that has a less-than-fully-attached wheel, you would think that sending a car out with a knowingly defective and llegal rear wing was very much the same.
Nice to see the return of the good old-fashioned bash to try and get something to work. Also funny to see a mechanic with MERCEDES emblazoned across his immaculate kit applying the same age-old mechanical technique employed by the likes of Phil Mitchell in his arches workshop. That rear wing probably cost