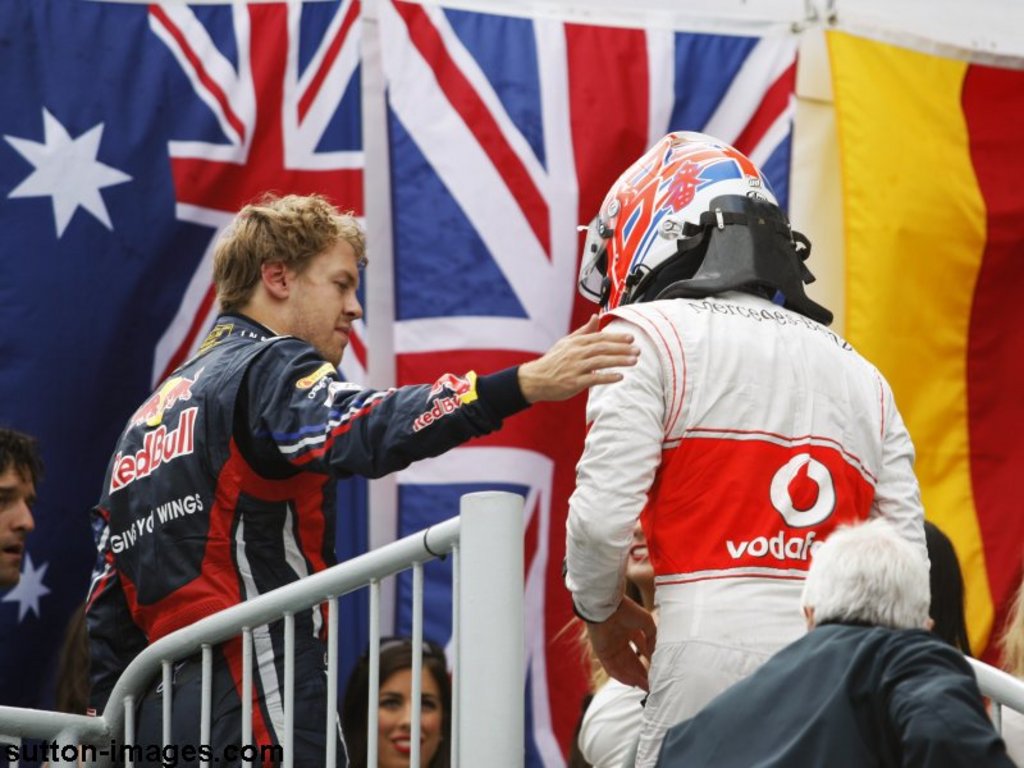 Jenson Button won yet another GP to remember – except this one had a unique twist, a Vettel error…

It was an epic Canadian GP in every sense – in duration, drama and rainfall inches.

Star of the Race
Jenson Button, McLaren, 1st
Jenson Button, with six trips down the pitlane, beat Sebastian Vettel, who had three trips down the pitlane and Mark Webber, who also had just three trips. One of those trips – for speeding behind the Safety Car at the start – must have been for the slightest of miscalculations from the team on his delta times.
This was a lesson from Jenson on how to be combative and take risks without going to extremes.
Button’s clash with Alonso was a 50/50, but bearing in mind that Alonso was on an outlap, Button had much warmer tyres and was marginally ahead of him and on the inside, you wonder why the Ferrari driver thought he could make it through Turn 3 side-by-side, on the outside, braking as late as he did.
Button did enough in the closing stages to prove that he had the fastest car. It was very much the same as in Monaco only Jenson didn’t get to show it two weeks ago. It also makes you wonder what the closing laps of that race might have been like had Vettel been put under pressure.

Overtaking Move of the Race
Lap 51, Michael Schumacher, Mercedes
Michael completed the cheekiest overtaking move of the race steaming up behind the squabbling Kobayashi and Massa and driving by them both. He had to go off the racing line and onto the wet stuff to do it and even though he was equipped with inters at the time, they’d already had a lot of use making up the gap.
There can hardly be a motorsport fan watching who didn’t want him to get that last podium place, but alas, it wasn’t meant to be. Giving up? Don’t think so.

Winners
Sebastian Vettel, Red Bull, 2nd
Vettel’s good luck finally ran out on Lap 70 of 70. He’d coped with four re-starts pretty well but paid the price for managing the gap to his pursuers a little too meanly. It was clear in the final five laps that he was able to increase his pace (not beat Jenson Button, but limit his gains to tenths of a second) and what Red Bull will now have to do is figure out why they didn’t spot the threat from Button earlier.

Mark Webber, Red Bull, 3rd
There was an interesting moment in the press conference afterwards where Mark suggested that each of the top three got what they deserved today. You got the feeling that his team-mate wasn’t necessarily on the same page at that point. Webbo looked to be struggling with his car in various parts of the race but still brought it home third. Had he not been tapped by Lewis on the opening lap he may still have finished third, so no great loss of sleep. He lost control of his car at key points today and was overtaken by both Schumacher and Button as a result, but with a problematic downshift, the fact that he had problems mid-corner or beyond may point to this as the reason.

Vitaly Petrov, Renault, 5th
Nick Heidfeld had been doing most things right through the GP weekend but it was Vitaly who got to sweep up the points when Kobayashi caught his team-mate out. So, no need to bash the prat stand for a second time Renault engineers, you’re still in front of Mercedes.

Kamui Kobayashi, Sauber, 7th
Kamui was unhappy sliding down to P7 having run for so long in P2, but he was lucky to finish the race at all given the move he made on Felipe Massa into Turn 1. Massa had the corner on the Lap 35 restart and very sensibly jumped out of the way when he saw that Kobayashi was not going to give it up despite being over a car length back.

Toro Rosso, 8th and 10th
A couple of points finishes is good for STR, but even better for under-pressure Alguersuari. The move to a wet race set-up certainly paid dividends for him after a dismal qualifying.

HRT, 13th and 14th
The Hispanias did very well to finish ahead of both Virgins and the remaining Lotus. Liuzzi’s 13th place actually puts him ahead of all the new teams’ drivers with the exception of Jarno Trulli. Quite a result for the team who started a race later than everybody else.

Race Stewards
Considering they had so much to do, they didn’t seem to get anything much wrong. Maybe Emmo should get the job for the rest of the season. (Though the ‘Unsafe Release’ pitlane rule doesn’t seem to be enforced this year or maybe it has to be so unsafe that it involves a collision)

Quagmire and Brundle
Martin Brundle is used to endurance racing but this was endurance broadcasting at its finest. A five and a half hour transmission was some performance. Best quote of all was from Coulthard, taking about Michael Schumacher towards the end of the race when he said: “He’s got mur-errs full of Mark Webber. And he’s looking in his mur-errs for Jenson Button.”

Lewis Hamilton, McLaren, DNF
Button’s win will have been a very stark reminder to Lewis that you can’t win the race on the opening lap. And risking so much so early doesn’t bring dividends. Mark Webber’s response to being relegated to P14 at the second corner for no fault of his own was very sanguine. “It’s just so far to go in the race” he shrugged. In Monaco you can’t blame Lewis for having a go. In Canada, in changeable conditions you can. Given how much faster than Button he was at that stage of the race, you’ve got to think that they could have been on for a 1-2 today, but Lewis blew it.
Hitting his team-mate was something you imagined would happen sooner or later when Jenson got fed up of giving way, but this was simply a spectacular miscalculation of where to use an unexpected speed advantage. He’s really going to have to watch his step in Valencia now.

Fernando Alonso, Ferrari, DNF
Alonso reckons he had an unlucky day in the office, but the Ferrari team could have been a bit more pro-active with their tyre stops instead of stacking Massa and Alonso when they changed onto inters. They were also slow getting Massa onto slicks.

Felipe Massa, Ferrari, 6th
It was a cracking finish, but ultimately Felipe Massa will look back on what might have been. He struggled to get past Kobayashi all through the race and paid the price for going off line behind backmarkers when he spun into the wall and damaged his front wing. Jenson Button had been faced with the same prospect when he was in P4 and coming up to lap Timo Glock, who stubbornly refused to remove his Virgin ox cart off the racing line. Jenson chose to wait his moment and then we got the Heidfeld debris Safety Car. Massa tried a pass and found himself revolving.

Stefano Domenicali, Ferrari Boss
Interesting to see how keen Stefano Domenicali was to come and talk to the BBC this race, having voted for the reinstatement of the Bahrain GP a week earlier.
After the race, his explanation that Jenson Button was more responsible for Alonso’s accident than Fernando sounded like it was more for the benefit of Ferrari HQ than