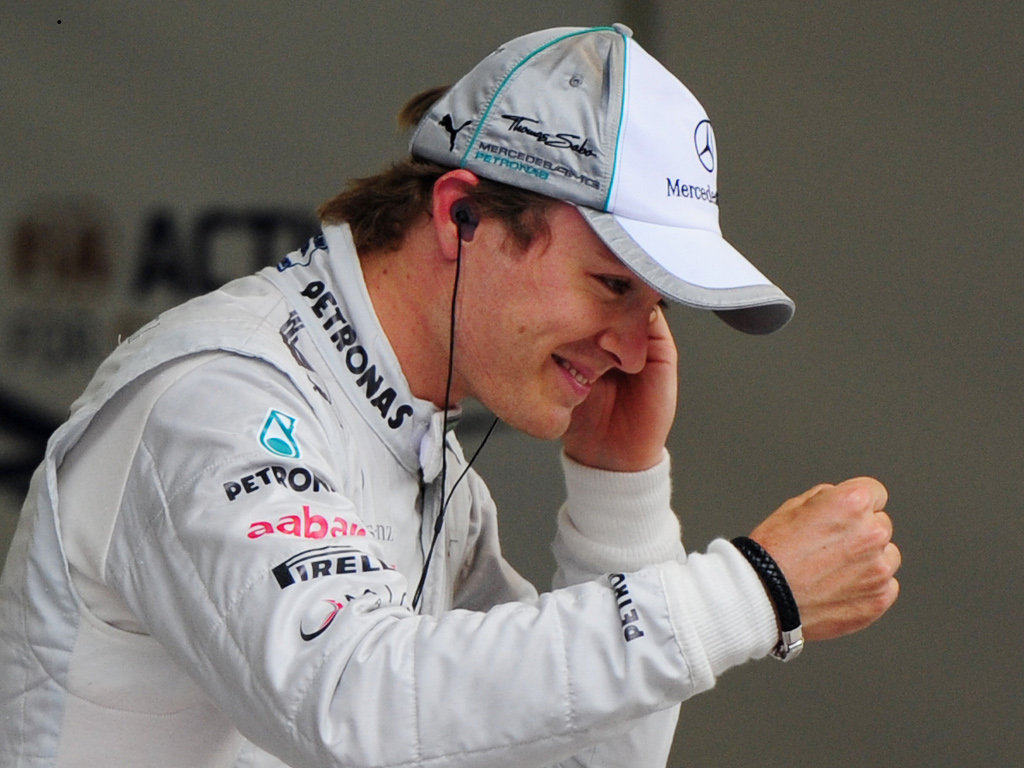 Nico Rosberg kept it neat and tidy and avoided all pit stop woes as he raced to his maiden Formula One victory in the Chinese GP.

Starting from pole position, Rosberg pulled away from the chasing pack – led by his team-mate Michael Schumacher – and only relinquished the lead in the pit stops.

Despite concerns about Mercedes’ tyre wear, Rosberg needed just two stops to win his first grand prix by 20.6s over Jenson Button, who fought his way back from a pit stop error. Button’s McLaren mechanics struggled to attach his left rear in his final stop, costing the Brit dearly as he dropped well down the order.

Lewis Hamilton finished third ahead of the Red Bulls in a race that exploded into life in the last 11 laps.

Race Report
A typical Shanghai haze hung over the Shang circuit before the race start with temperatures at 22C ambient and 24C on the track. “Warm enough” said Jenson Button before the start, mindful that he’d had trouble getting his front tyres to work when it had been cooler. Jean-Eric Vergne had changed the bodywork of his Toro Rosso and so would start from the pitlane.

Start
Nico Rosberg got an amazing start from P1 and sprinted into Turn 1 unchallenged. Behind him, Michael Schumacher was able to keep P2 without much trouble. It was the second row of Kobayashi and Raikkonen coming under pressure from the two fast-starting McLarens who suffered. Button worked his way past Raikkonen into P3 and Hamilton went wheel to wheel with Kobayashi who lost momentum and the place to both Hamilton and his team-mate Perez.

Further back Mark Webber got another bad start and lost places, but not as bad as team-mate Sebastian Vettel who was very slow away. “Normally I’m quick, but today I was very late” admitted Sebastian after the race. As a result he got stuck behind the Williams and even found himself duelling with one of the Caterhams.

Bruno Senna missed his braking into Turn 1 and lost parts of his front wing on the back of Felipe Massa’s Ferrari (but didn’t need it replaced), elsewhere there was contact in front as carbon fibre flew past Senna’s onboard camera.

On the opening lap Mark Webber managed to get past Alonso and then Alonso retook him at the end of the lap.

After the opening flurry of activity things settled down. Jenson Button had Kimi Raikkonen in the DRS tow and behind Kimi, Lewis Hamilton had Sergio Perez in the tow, but nobody was making a move. Everyone was wary of pushing too early in a race where tyre management would be critical.

Mark Webber pitted for new tyres at the end of Lap 6 and rejoined the race in P20. At the front, Nico Rosberg was steadily going away from Michael Schumacher and by Lap 7 had a 3.5 second gap. Michael Schumacher now had a train of Button, Raikkonen, Hamilton, Perez and Kobayashi.

This all changed on Lap 9 when other teams started to pit (with Mark Webber quickly reducing the fastest lap behind them all). Kobayashi and Vettel came in on Lap 9; Raikkonen and Hamilton on Lap 10; Button on Lap 11; and Schumacher, Alonso and Senna on Lap 12.

Hamilton and Raikkonen exited the pitlane side by side, the Lotus being released straight into the path of the Mclaren and running side by side down the pitlane till Kimi ran out of room at the end. They rejoined the track right by Mark Webber and though Lewis Hamilton was able to get past the Red Bull, Kimi could not, trying very hard at Turn 6 where Mark closed the door on an outside move from the Finn.

Rosberg was able to keep his pace the longest and while he was pitting on Lap 13 eyes turned to Michael Schumacher who’d just lost a place to Jenson Button in the pitstops. There had been consternation in the Mercedes pit directly after Schumi had been released from his pitbox and later in the lap he had to park the car with a loose wheel. (The FIA would investigate for an unsafe release).

With Rosberg pitting, this left Sergio Perez in the lead from Felipe Massa who’d started on the harder tyre.

When Perez finally pitted on Lap 16 he exited just in front of Sebastian Vettel in P10, while Massa would fall to P14 when he came in at the end of Lap 18.

On Lap 19 Rosberg led from Button and all the pre-race predictions, that the Mercedes would eat up its tyres were not coming true. The reverse was the case with the W03 able to run longest on the soft compound Option.

The gaps on Lap 20 were: Rosberg 4.7 to Button 2.1 to Hamilton 3.4 to Webber 0.6 to Raikkonen 0.5 to Alonso. But just as we got a settled running order established Mark Webber kicked off the second round of pit-stops by coming in at the end of Lap 21. With the Aussie just three seconds behind the McLaren of Lewis Hamilton, the team reacted by bringing Lewis in for his second stop – and a lap after that Jenson Button.

Button was released behind Vettel and Perez, but Hamilton was re-inserted behind Felipe Massa, and because Massa had relatively new rubber, proved difficult to overtake. Hamilton finally took him with a hestitant pass at Turn 6 on Lap 26 and a lap later Webber was past as well at the same turn

Meanwhile Button using his DRS and younger tyres was able to get past Perez and then Vettel and by Lap 31 it was looking promising for the Brit. He was putting in 1:41s while Rosberg ahead could only manage 1.43s. On Lap 32 Button showed his intent by putting in the fastest lap of the race so far with a 1:40.908