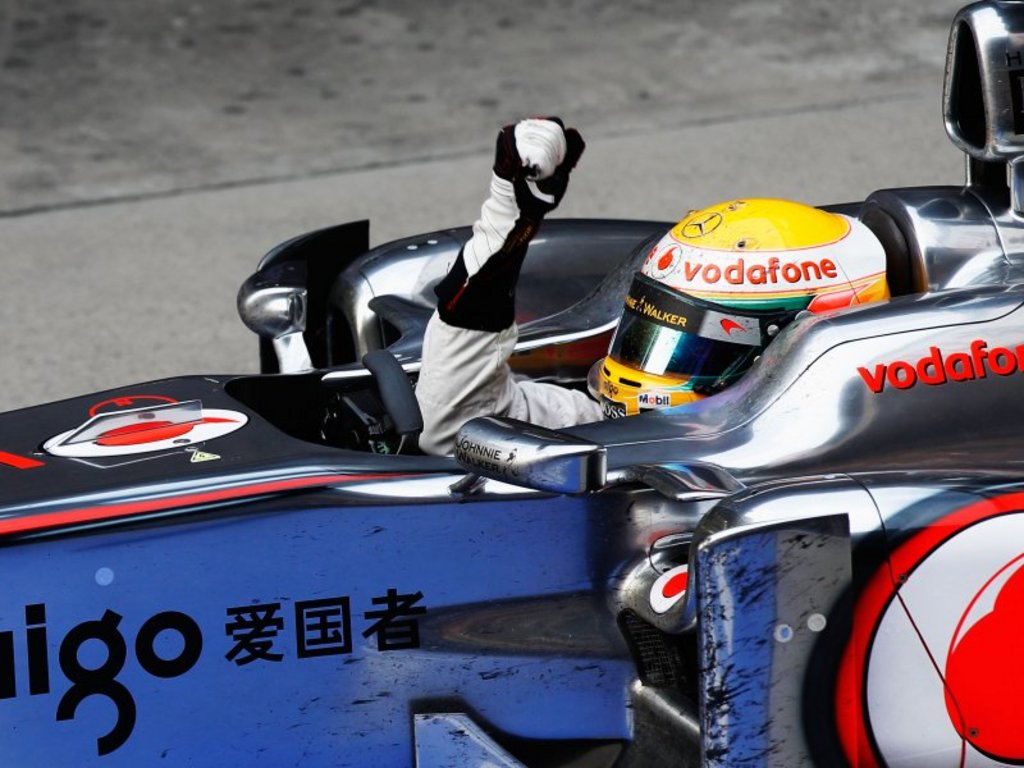 Lewis Hamilton was the obvious winner, but Mercedes are back in the game and Jenson won the donkey ears…

Many winners, few losers, and one set of donkey ears to the triathlete. I think Red Bull will present a comedy item to Jenson commemorating the event in the not-too-distant future.

Star of the Race
Lewis Hamilton, McLaren, Winner
Hamilton was hampered again by a team he was keen to point the finger at for last weekend’s miseries. Lewis went off on one and sulked after the last race in Malaysia. Thus before the race he felt the need for a penitential interview with Jake Humphrey where he confessed his reaction hadn’t been very good (bit of an understatement there) – but it hadn’t been very good because… and he went on to list the decisions the team had made which had cost him dear.
When Felipe Massa passed him on Lap 14 he might have thought it was happening all over again. The reason was that Jenson had missed his pitstop window by a lap and in that one lap the tyres on the McLaren had really started to go away, to the extent that they were a second slower than the Ferraris even when Jenson came in.
He didn’t let it get him down.
Hamilton’s sustained aggression in China was no different to the kind of race he was driving all last season, only this time it was Red Bull who got their calculations wrong and the McLaren came good. Vettel came in on the same lap as Button (as we all saw and enjoyed) and could have won the race if he’d had Mark Webber’s strategy. We didn’t hear Seb moaning.
Lewis is driving like a World Champion and today was a perfect demonstration of a driver at the top of his game. But it’s no good thanking the team, and the guys back at the factory for everything they’ve done etc, when the week before you had a go at the team. People can remember back that far.

Overtaking Move of the Race
Lap 36: Lewis Hamilton, McLaren on Jenson Button, McLaren for P2
There were so many overtaking moves in the grand prix it was difficult to see them all, but the ones that really counted were the ones made between cars on the same tyre strategy. As Lewis himself said after the race, he’d never overtaken anyone for position between Turn 14 and the final corner, Turn 16, yet he got past Alonso on acceleration there and almost did the same to Massa, thanks to the differing state of the tyres.
Lewis wins this one for overtaking Rosberg and Button when they had the same tyre wear. The Button overtaking move was critical, because it was clear towards the end of the race that Button couldn’t catch Vettel whereas Hamilton not only got past Button and Rosberg (flatspotting a front tyre on the way) he caught and passed Vettel with ease.
Also in with a shot was Michael Schumacher who produced a little gem to get past Petrov, Webber, who blended aggression with a fair deal of patience and Perez who actually got round Webber with a barnstormer on Lap 9 as he struggled on the Prime tyres.

Winners
Pirelli
Paul Hembery must be a happy man after Pirelli delivered the kind of race that Bridgestone – with maybe the exception of Montreal – never could. Only three races into the season and we’ve had a classic. Christian Horner is still of the belief that two stops was the right strategy decision for Vettel, which bodes well for future races. Because if two-stops and three-stops compute to just about the same result, then that’s going to produce more nail-biting finishes like the one we saw today.


Sebastian Vettel, Red Bull, 2nd
Sebastian blitzed pole position. He also had a bit of a post-race whinge about where they stuck that pole position, but was fairly phlegmatic about the rest of the race. Despite limited radio contact and a faltering KERS he almost made it three victories in a row. With three weeks till Turkey Red Bull have a lot of time to sort out their enigmatic boost button.

Mark Webber, Red Bull, 3rd
When Perez came scything past him on Lap 9 I have to confess that I thought Mark’s race was over. On Lap 23 he was still stuck in P11 behind Sutil and Kobayashi. When he passed Michael Schumacher towards the end I thought he’d probably catch Massa. And he only ends up on the podium. It must have been the most exhilarating experience to be an Aussie F1 fan during the closing stages of the race. Given two more laps he would have been second. Given three he would have won. He should try exiting in Q1 again, it seems like a lot of fun…

Nico Rosberg, Mercedes, 5th
Relief for Ross Brawn and Norbert Haug as at last Mercedes got to play with the big boys. Rosberg’s early stop put him in the dizzying position of leading the race for a fair few laps. Fifth was only what he was due. It was also a good way for his engineer, Jock Clear, to sign off before leaving the frontline of race engineering to put on a sharp suit and play with stationery back at Mercedes HQ.

Felipe Massa, Ferrari, 6th
Massa had another fantastic start – three in a row now. Fernando Alonso says the Ferrari is just too slow, but looking at the timesheets at the end of the first stint, it didn’t appear that way. Massa began to lap a second a lap quicker than the McLarens who weren’t being held up.
They may have a problem with adopting the right strategy but even when he was on the wrong tyres Massa was able to put up more resistance to Lewis Hamilton than Alonso did.
Ferrari passed up on the opportunity to re-employ Ross Brawn after his sabbatical and promoted Stefano Domenicali instead. Ross went off to Honda, won the World Championship with Brawn and is now getting the job done for Mercedes. I wonder if Luca Montezemolo is having regrets…

Fernando Alonso, Ferrari, 7th
Obviously he’d like to be doing better than 7th from 5th on the grid, but given that Mark Webber was out of place in 18th, then Fernando dropped just one place and that was to his team-mate. Lewis took 8th from 2nd last weekend which was a lot worse.

Michael Schumacher, Mercedes, 8th
Some wily old moves from Schumi including a textbook example of how to defend Turn 14 with the permitted single move, against Alonso. He was unlucky to be so far back in qualifying following Petrov’s untimely stop and despite the best opening lap of anyone, he was just that little bit too far back. Though he was a whisker shy of Alonso at the flag.
Being a pragmatist he will look on the bright side, that at last Mercedes have got the pace to compete now. Michelle Foster’s ill-considered bet to buy the whole of the Planet-F1 team a Schumi 4-Ever T-shirt if he returns to the podium looks very close to being paid out.


Heikki Kovalainen, Lotus, 16th
No points, but Team Lotus raced and finished in front of Perez and Maldonado. A fabulous days for all of the newbies with all six of them finishing the race and D’Ambrosio staying in front of Glock… Who you’ve got to assume is going to be a