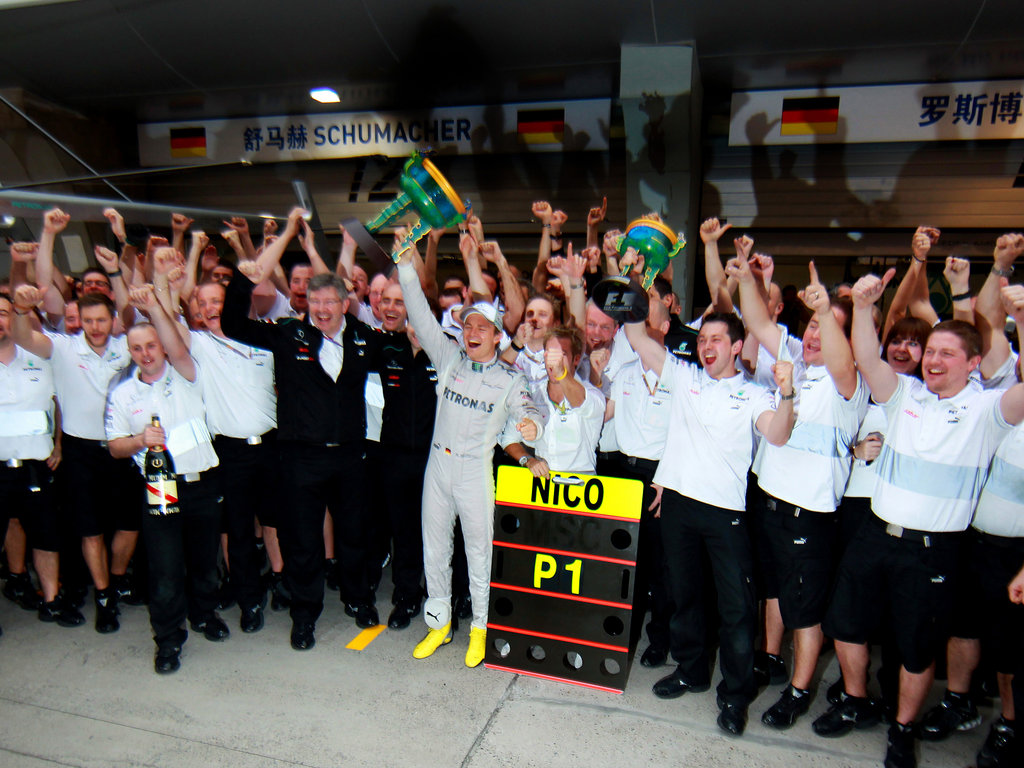 Can Mercedes make it a China double, can Felipe make it five in a row, and can Force India now get their wheels off…?

Three weeks after the stifling heat and humidity of Malaysia we arrive at the Shanghai International Circuit for the tenth Chinese GP.

If there’s one team that’s grateful for the TV-unfriendly long break between the Malaysian and Chinese Grands Prix, it must be McLaren. They more than any other team will be hoping it stays dry on Friday in Shanghai as they have a big programme of checks and balances to get through.

Rewind to a year ago and it was Mercedes who scored their first victory in China with Nico Rosberg, and back then it looked like Ross and Norbert’s team had finally joined the big three. It was a promise that went unfulfilled for the rest of the season, as they reversed backwards past Lotus and almost into the clutches of Force India and Sauber.

With Lewis Hamilton outqualifying Nico Rosberg for two races in a row this year, Mercedes now have the driver boost that Michael Schumacher couldn’t give them. In the past Michael was always the F1 pin-up boy when F1 came to China, the most recognisable face in the sport. Now, there are many more drivers known and loved by the Chinese F1 fans (who touchingly have a great reverence for David Coulthard and Eddie Jordan, as the BBC are the broadcasters picked up by Chinese television. There were some great moments on the BBC forum after last year’s race, and it’s worth catching online if you can.)

Unlike the fast switchbacks of Sepang, Shanghai has almost no high speed corners and features predominantly low-speed ones with a smattering of medium turns. Some of Hermann Tilke’s lower speed corners have an extended radius, with tightening arcs. Lotus Technical Director James Allison is well aware of the challenge this poses. “It’s quite a stern test for the tyres, as you have a significant excess of torque over grip making it very easy to wreck a set of rear tyres rather quickly. It’s generally quite cool in Shanghai as well – unseasonably so last year – meaning that graining will be an issue once again; particularly given the smoothness of the asphalt which is comparable to that of Melbourne.”

Sounds like a Lotus kind of race, then. Last year the team tried to go through the race with one stop fewer than the pack and Kimi Raikkonen fell spectacularly off the cliff as his front tyres gave up and he dropped around eight places on a single lap. Romain Grosjean is kinder to his fronts than Kimi, so that should be a battle to watch.

Brakes are also a premium at the Shang with the interminable back straight and the big stop into a hairpin that will also create tyre wear through inevitable flatspots. Though it’s unlikely that we’ll see a Toro Rosso detach its wheels under braking as elegantly as Sebastian Buemi managed (a la James Bond).

Pirelli will be bringing Medium and Soft tyres to the race and motorsport director Paul Hembery, has been keen to emphasise in his pre-race quotes that the top teams will learn how to manage the increased degradation of 2013.

“China has often produced some of the best races of the year, where strategy has been at the forefront of the action. Shanghai is less aggressive on the tyres than the last round in Malaysia but we would expect to see the majority of competitors go for three stops although some may try two.”

In the past there have been showers and mixed conditions in Shanghai, but this weekend the forecast is for relatively cool conditions but dry on all three days.

With the emphasis on tyre wear there will be a familiar chorus of disapproval from some quarters, most likely Red Bull, but not Force India. Providing they can get the wheelnuts off their cars during pit-stops the Silverstone-based team should be looking at another strong race, well aware they gave up a big haul of points in Malaysia.

Felipe Massa has a great personal target to aim for. Not only is he leading Fernando Alonso in the Drivers’ table, he has outqualified his team-mate four races in a row. Nobody has done that to Fernando five times in a row. Having lost out through a self-inflicted wound at Sepang, Alonso will be very keen not to drop further behind Massa and the rest of the grid in China, so it may be that we see a conservative approach from El Nano.

Two things we haven’t seen so far in 2013 are the Safety Car and Bernie Ecclestone – with a lot of behind-the-scenes machinations about the commercial agreements governing F1, it’s a surprise that Bernie hasn’t been more visible. There are a lot of loose ends to be tied up in connection with 2013, let alone 2014 and beyond. And with two rainy weekends, it’s surprising we haven’t had a Safety Car either.

What we should also look out for is the length of time that a Soft compound tyre can last on fullish tanks. Because if the race does prove to be like a re-run of Melbourne there may be a few cars playing it tactically in Qualifying. We might get cars making a token run in Q3 on the harder Medium tyre – not putting much of a heat cycle through it to establish a position around rows 4 or 5, slightly above somebody who doesn’t bother to come out at all in Q3.

And finally, although there have been a few news stories run – one of the better aspects of this year’s Chinese GP is that it won’t be overshadowed by what is happening on the following weekend, in Bahrain.