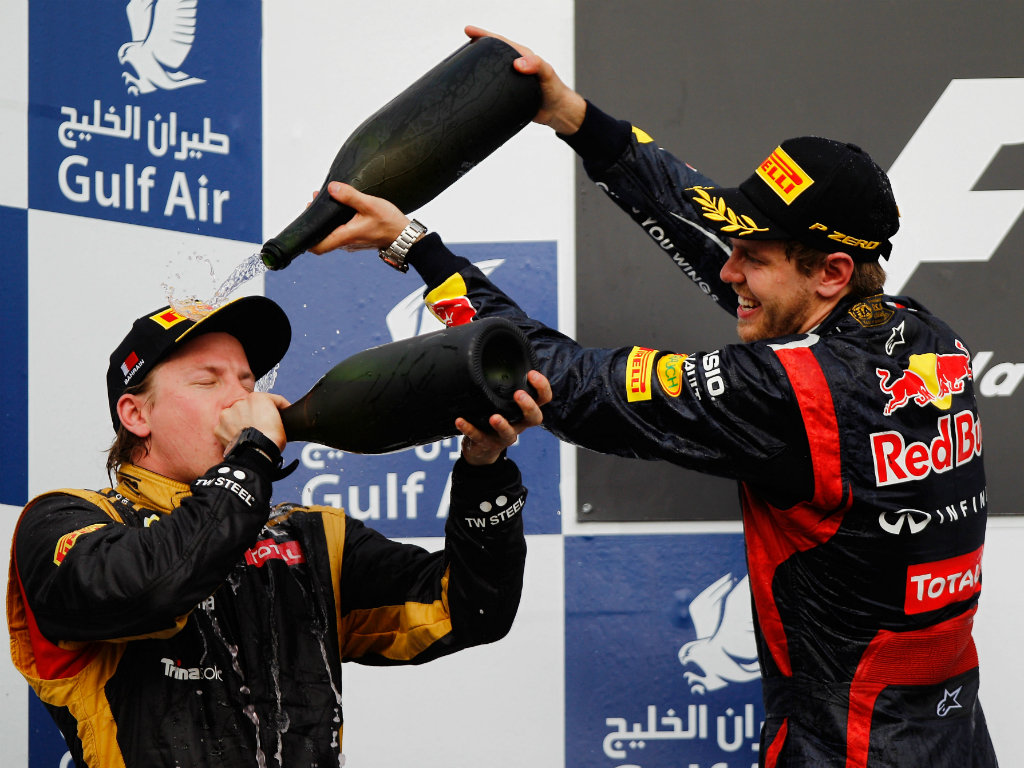 Why Sebastian Vettel is just Champion, why Lotus really mean business and why the stewards got it wrong…

Why Sebastian Vettel is just Champion, why Lotus really mean business and why the stewards got it wrong…

Vettel Is Just Champion
Pity Mark Webber. For the first month of the season, he had the upper hand over his Red Bull team-mate. Faster by three to zilch in qualifying, faster than Sebastian in both Malaysia and China, the Australian was the sole Red Bull driver seemingly able to control the misbehaving RB8. And then wham, the team finally uncover a way of switching on their new charger – mainly, it seems, by blocking up a small hole in the sidepod – and look what happens: Vettel takes pole position and disappears a day later, finishing 38.7 seconds up the road in a 57-lap race. Wherever Mark’s head is this morning, it can’t be in a good place.

Vettel, meanwhile, is back where he has grown accustomed to being. It’s easy to understand his relative lack of popularity because his victories have the habit of putting the processional back into a spectacle. It’s equally easy, however, to spot the flaw in the rebukes he receives. In F1’s race to be the first at the finish, frontrunning – particularly the faultless kind – is a skill and very arguably the most valuable skill-set a driver can possess if he wants to be what only one of the 24-driver field can be: the winner.

Vettel’s uncanny knack, time and time again, is to do just enough to finish first – look at how many of his victories are secured with a margin of less than five seconds – and to come to the fore when it matters most. As demonstrated by this weekend’s sudden shift in the balance of power at Red Bull, he is a driver who only delivers his best when the best is possible. It’s the reason why, even if Hamilton might be the most talented driver in the field and Alonso the most complete, Vettel still reigns supreme as F1’s number one winner.

Lotus Return To The Elite
Let the good times of 2012 last. The season has commenced with four different winners in as many races and, with Lotus’ leap forward this weekend in Bahrain, four frontrunning teams. And assuming Ferrari don’t make a bodge-job in the development of the F2012 twice in six months, four will surely become five in Spain. Game on.

Perhaps somewhere in that summation of how F1 has rarely shown up as a better sport is the ultimate non-political damnation of the decision to travel to Bahrain this weekend. F1 just didn’t need the aggro; it just didn’t need Bahrain at all.

Lotus, though, are entitled to remember their trip to the desert for all the right reasons: their first podium-double in twenty years, Kimi Raikkonen bettering anything Michael Schumacher has produced in his two-years-and-a-bit-old comeback after just four races in his second F1 life, Romain Grosjean, feeding off the confidence inspired by his late surge in China, becoming the first Frenchman since Jean Alesi, who was a Sicilian half the time in any case, to stand on a F1 podium.

True enough, the team stood on the podium at the start of last season when Vitaly Petrov and then Nick Heidfeld were given a foot up in Australia and Malaysia respectively. But that was at the very start of the season and after that their year fell entirely flat. What’s significant about this weekend’s result is that it occurred three months after the E20’s introduction and on account of a raft of upgrades the team have since developed. That, coupled with the way Lotus quietly went about their business on Friday, duping us all into thinking that they were set for another quiet weekend stuck short of the frontrunners but clear of the midfield, is the signature modus operandi of a serious member of the elite.

With the promise of one more to come after Mugello, three has definitely become four.

And Kimi Learns It’s A Team Game
But should Lotus have won? Probably. Would they have won had they instructed Grosjean to let Raikkonen pass when the Finn was flying on softs before the second round of pit stops? Very probably.

Regardless of his proximity to Grosjean, Raikkonen’s soft tyres were degrading at this point of the race as they reached the end of their shelf-life, but there’s enough in that sharp drop-off to suggest that Lotus’ refusal to interfere cost Raikkonen the win.

Note, however, that Kimi offered not a single word of complaint afterwards, preferring instead to blame his misdirected attempt to take Vettel around the outside of Turn One in what proved to be his one and only passing shot at the lead. Having been ditched by Ferrari for not being a team player (“We realised that our team needed a driver capable of really getting involved with the engineers, a characteristic that was not part of Kimi’s genetic make-up, even though he is an amazingly talented guy,” was Luca di Montezemolo’s damning passing shot), two years spent digging cars out of a ditch seem to have put the team into Raikkonen.

McLaren Reach The Pits
The good news for McLaren is that it shouldn’t be too difficult to find a cure for their on-going pit stops calamities. After all, all they have to start doing is what every other team manages to do with regular competence every weekend.

Give their shambles a shake, however, and two interesting aspects to the debacle fall out for further scrutiny.

The first is the distance Hamilton put between himself and the team he refuses to commit his future to after this weekend’s race. “I got everything I could out of the car…since the last race in China my positioning for the stops has been much better…I think I did a better job on all my three stops. It is the team’s job to sort the stops out.”

The second is the pressure Sam Michael, now responsible for the organisation of McLaren pit stops, finds himself under to find an immediate fix if his reputation is not to suffer lasting damage. The Australian certainly cannot be feeling comfortable at present: Williams, the team he left in November from the role of Technical Director at the end of their worst season in F1, are now in revival, while McLaren, the team he has joined as Sporting Director, are suddenly unable to put on a new set of tyres faster than the average back-street dealership.

Regardless of their pit stop calamities, McLaren, stricken by Sunday’s unpredicted cooler conditions, did not possess the pace to win and Hamilton probably only lost out on fifth place. Yet in a season so tightly fought, there are not pointed caveats.

The Stewards Go Off Track
The unfunny funny thing about Nico Rosberg’s let-off was the absence of a penalty against Lewis Hamilton instead. The stewards couldn’t have it both ways; if Rosberg’s driving was deemed within the rules even