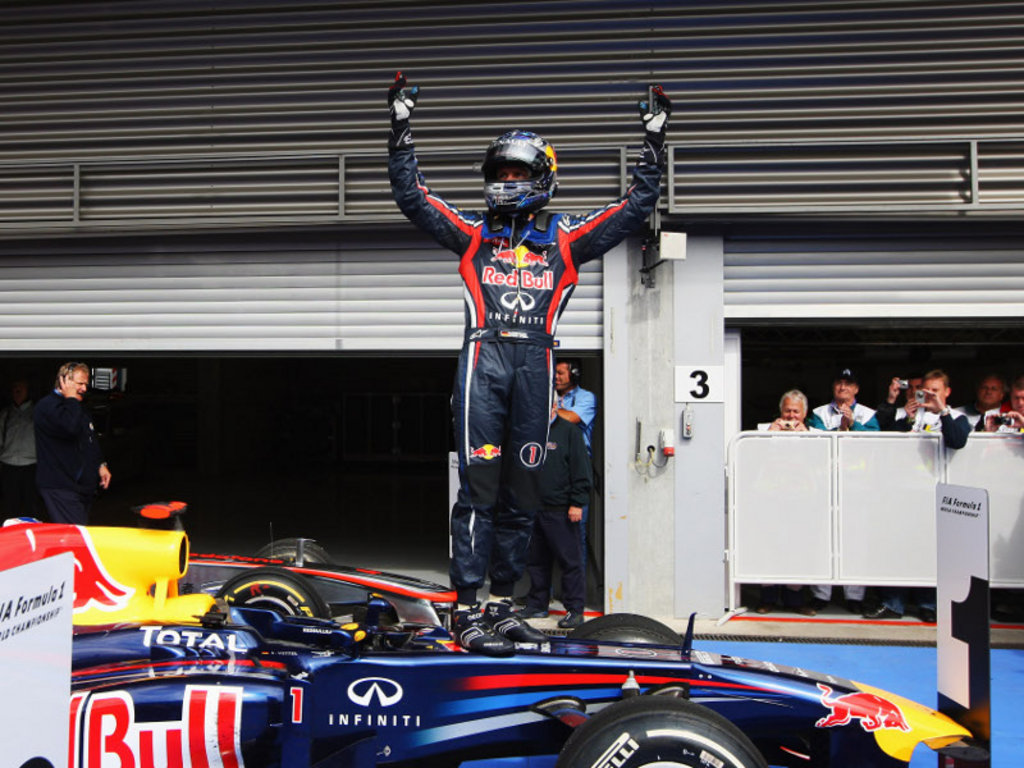 VETTEL WAS AT HIS BEST
If Mark Webber, even in conclusive defeat, believes the tenth perfect score in Red Bull’s history “to be our best result ever as a team”, and Christian Horner concurs that “this was our best ever weekend”, then the third stop of our opening conclusion must be that Sebastian Vettel has never won better. After all the talk of a collapse, Vettel walked the walk in the Ardennes to run away with another Championship. He’s good and he just answered back even better.

Measured in kudos, a victory at Spa ranks alongside winning around Monaco on a driver’s CV and Vettel’s first in Belgium this weekend was delivered with the extra credit of discrediting any thought that his title tilt was on the wane. The blip is over and the World Championship is all his again. To the people who thought it might not be all over, it is now.

Whether Vettel would have won without the ‘luck’ of Hamilton’s crash effectively offering him a free pit-stop is fascinating to speculate upon and impossible to answer, but a Champion makes his own luck and the intelligence of Vettel’s support staff should not be underestimated in understanding why, even though Red Bull, McLaren and Ferrari have been reasonably well matched for the majority of the campaign, his Championship lead can already be considered unassailable. Like their main man, Vettel’s crew have made far fewer mistakes than everyone else.

The twist in the tale was that Vettel only required both of his early stops because the Bulls were refused assistance from the race stewards prior to kick off, with the team denied permission to change their blistered tyres. Quite right, too; with Vettel pitting twice within the opening fifteen laps, the secret is open that the Bulls’ problem was of their own setting. Not the circuit, not the qualifying conditions, but the camber at which they had set their tyres. To say it harshly, they had some nerve in requesting dispensation to change their rubber which was being damaged as a result of a choice they presumably felt would facilitate a performance advantage. Make your choices, take your chances. If your tyres can’t cope with the loads you’ve demanded of them, change them – which is precisely what the Bulls had to do, with Vettel pitting on laps six and sixteeen, and team-mate Webber staying on the slower but harder medium-option tyres for almost the entire duration of the race.

So these were the circumstance under which Vettel won. Difficult, stressful, potentially dangerous.

And he remained flawless.

Hail to the champ.

IT’S DECISION TIME FOR LEWIS
So that’s that for Lewis Hamilton’s title chances. If, that is, there was still half a chance remaining.

The issue with Hamilton, no matter how you share the play of the blame game, is that it always seems to be Lewis. Massa and Maldonado in Monaco, Button in Canada, Kobayashi in Belgium. The common ingredient is always a chunk of Hamilton’s McLaren. He’s involved in far too many of these incidents for his own acceptable good.

The nuance to such an obvious point is that Hamilton’s penchant for controversy and crashes is largely a natural and inevitable off-shoot of his refusal to play safe, to alter his style, to bide time and wait for a mistake. There is, as stated previously, only one pace in Hamilton’s repertoire: flat-out. That’s his strength. But it’s also his weakness. He doesn’t know how to avoid trouble because he has never tried to.

The stewards’ decision to instantly dismiss his latest race-ending prang as a racing incident is subtle reinforcement of the underlying cause. Racing accidents are an occupational hazard for a racer who is always racing. What Hamilton must decide when the time comes – and that time is already now – to pick the bones out of this season’s carcass is whether he wants to be a racer or a winner, or at least be a little of the former to be more of the latter.

If not, he’ll win far fewer World Championships than his talent dictates. Great drivers, and World champions, don’t crash like Hamilton so frequently does.

AND HAMILTON WAS QUICK TO ADMIT, SLOW TO CHECK
Still, if that’s the general commentary, the disappointment is that the stewards short-changed the viewing public by denying us an examination of the specific. Above all else, a thorough examination of the telemetry would have been fascinating for revealing what no number of replays simply couldn’t.

What were the comparative speeds of the two cars at the time of the crash, how did Kobayashi’s speed compared to all the previous laps when he managed to make it round the corner, to what extent – if any- did his broken front wing interfere with his pace, and, with Hamilton reporting he was “massively slow on the straights”, just how slow was massively slow? In passing, that admission is a damning comment on his apparent ignorance of Kobayashi’s presence, never mind his failure to check for his actual whereabouts.

The blame can be shared, but the critical fault was exclusive to Hamilton.

BUTTON DRIVES HOME THE CONTRAST
In any other team, and in almost any other era, Jenson Button would be feted as an overtaker with all of his other facets reduced to a distant afterthought. Why the fuss about his ‘smooth’ style when he is such a daring overtaker? Button is the supreme contrast in style: as smooth as silk when there’s open road in front, as bold as brass when he’s on the pass.

Victor in Hungary before the mid-season sabbatical, Button remains in rare form at present, on this occasion salvaging a podium after starting from 13th. “Jenson’s was the drive of the day,” reflected Martin Whitmarsh appropriately. “If we could have got him up the front of the grid where he could and should have been he would have been a contender today.”

Where have we heard that before? The story of 2011 is asking for its retelling back. The details might change, but the core narrative is stuck on repeat: McLaren have thrown away far too many points, and plenty of probable victories, with mistakes purely of their own misdoing.

In company with their troubled chosen son, they have much to ponder and much to reconsider when their time comes to call time on a season of frustration and squandered opportunities.

SPA DOESN’T NEED GIMICS
Or at least it doesn’t need a DRS zone at the top of Eau Rouge. Not when the corner remains the best in F1, an epic challenge of commitment and bravery and skill. To sit through the sensational sight of Mark Webber and Fernando Alonso going wheel to wheel at the bottom of the hill, both utterly committed, both utterly trustworthy of the other, was to witness the very best of the sport.

What the corner didn’t need was its progression into a DRS straight that reduced the chased to sitting ducks. Even the vague suspicion