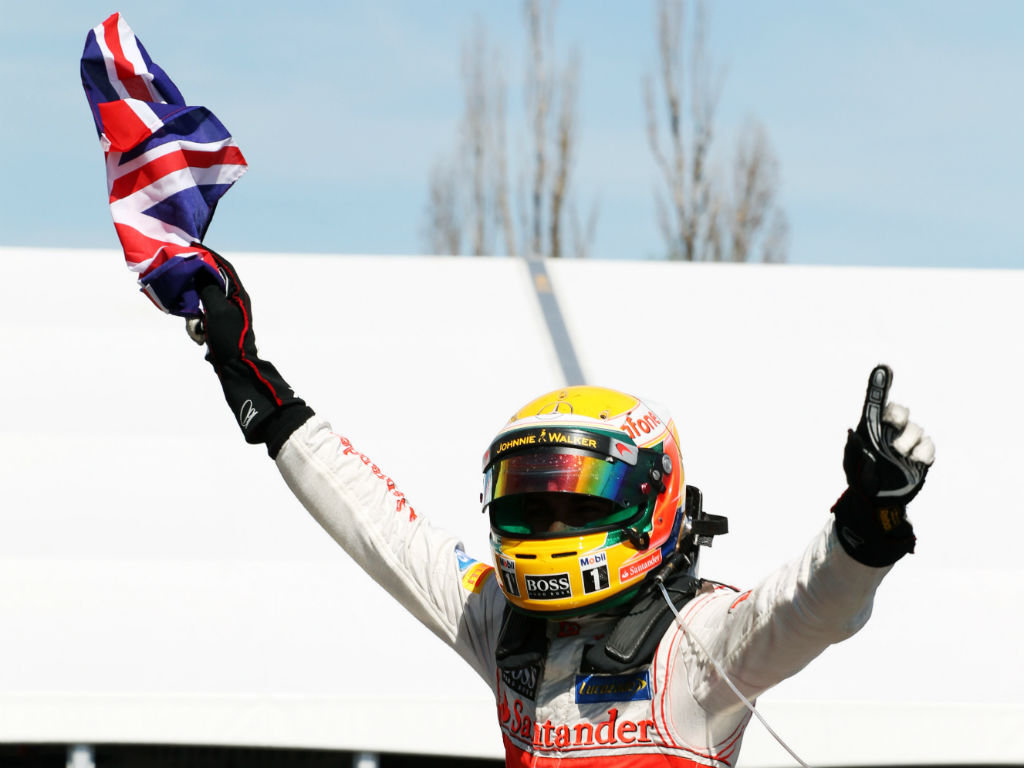 Lewis Hamilton proves that the Pirellis do still reward pace while Ferrari’s decision not to pit Fernando Alonso did, despite first appearances, add up…

Lewis Hamilton proves that the Pirellis do still reward pace while Ferrari’s decision not to pit Fernando Alonso did, despite first appearances, add up…

Hamilton Better Then His Old Best
So even on a day when the unexpected durability of the Pirellis saw the one-stopping Sergio Perez and Romain Grosjean claim podium positions from distant starting spots, the hare could still beat the tortoise. Amen to that. The pleasure of Lewis Hamilton’s victory wasn’t the appearance of yet another new face on the top step – as might have been mentioned once or twice already around these parts, that’s seven victors in seven races – but that he effectively won the race twice and on both occasions secured it the old-fashioned way: through the pace of his car rather than the preservation of his tyres.

Not that this was a weekend to criticise Pirelli, however. Though their role in the 2012 narrative remains far too prominent for pure satisfaction, an integral factor in the fun of this weekend was that their rubber gave everyone a chance: for while Hamilton and McLaren were able to convert their two-stop, flat-out strategy into victory, Grosjean and Perez were rewarded for protecting their rubber, and, as the chequered flag fell, just five seconds separated two entirely different strategies spread over 70 laps and almost two hours. When a fight between the tortoise and hare is so evenly fought, even animal rights activists would have a tough time finding justifiable reason to complain.

The trump card for racing activists, meanwhile, was that Hamilton’s strategy of speed was the winning one. Though preservation – of tyres, of engines, of machinery, of concentration – has always been part of F1 and always will be, the pinnacle of motorsport should always have pace as its primary point. And Hamilton’s was outstanding throughout.

Interestingly, the McLaren driver identified his middle stint, and not the headline-grabbing succession of fastest laps he reeled out after his second stop to haul in Fernando Alonso, as the critical component of his victory.

“When the guys were behind me, I kinda had a feeling that Fernando would be doing a one-stop, so I knew I had to make a gap while looking after the tyres,” he said afterwards. “I was able to make a gap and then hold it, even though Fernando started to pick his pace up. It was one of the best stints I’ve had for a long, long time.”

It’s interesting, too, that Hamilton long suspected that Alonso was one-stopping despite repeated assurances from the McLaren pitwall that the Spaniard would call into the pits at least twice. The 2008 World Champion’s racing intelligence has been criticised in the past, not least last season when Jenson Button repeatedly out-strategised him from within the preoccupied confines of the McLaren cockpit, but in Montreal this weekend Hamilton seems to have foreseen Ferrari’s strategy long before his team. Maybe that’s an exaggeration, and maybe McLaren were simply boxing clever with their radio calls to Hamilton, but his clear-thinking presence of mind is another trenchant indication that he is currently operating at the peak of his powers.

No tantrums, no mistakes, no loss of pace. Five years to the day since his first victory, the Hamilton of Canada 2012 was arguably better than we’ve ever seen him before.

Whitmarsh Survives Trial By Fifteen-Lap Terror
Were those tears welling in the eyes of Martin Whitmarsh at the end of the race? And if they were, were they tears of joy or relief?

It’s easy to understand the emotive effect of Hamilton’s victory on the McLaren Team Principal because the fifteen laps it took his lead driver to turn third back into first following his second pit-stop must have been the longest of his life. Having effectively asked Hamilton to accept the wisdom of two-stopping as an article of faith, it hardly requires a vivid imagination to retrospectively see an irrevocable breach emerging between driver and team had McLaren made a mistake with their calculations. After all, it’s not as if Hamilton doesn’t have history for popping into see Red Bull and checking if they have any vacancies after a race of crushing frustration at Montreal.

Nor does it require a leap of exaggeration to suggest that Whitmarsh’s position was on the line during that final third of the race. Had Hamilton been undone by a strategy that the team repeatedly assured was the correct choice, the Grand Prix would surely have ended with knives out for a defenceless target.

Why Grosjean And Hamilton’s Middle Stint Won Him The Race
The question remains, then, of just why Ferrari and Red Bull (at least until it was too late) stuck so rigidly to a one-stop strategies for Alonso and Vettel when McLaren were so convinced that two-stopping was faster. The answer revolves around Romain Grosjean, a proverbial spanner in the works, and his position in the field around the time of the second round of pit-stops.

Whilst both teams certainly erred (the race result proves as much) in their calculations, it was at least an understandable mistake because it was impossible for Alonso – let alone Vettel, three seconds further down the road – to pit and emerge in front of Grosjean given that the Lotus was only 15 seconds behind the Ferrari on lap 49.

Although it was hardly noticed at the time, when Hamilton returned to the track on lap 50, he did so just a breath ahead of the Lotus, with Romain Grosjean crossing the line on lap 51 still within two seconds of Hamilton (the McLaren being 14.54 seconds behind Alonso and Grosjean 16.59). Critically, Hamilton’s lead over Alonso at the time he took his stop was in the region of 2.5 seconds – a number which, when taken in conjunction with Hamilton’s two-second lead over Grosjean after his stop, explains why Ferrari didn’t stop Alonso and elected instead to gamble on winning the race by one stopping.

(The figures also, by the way, vindicate Hamilton’s contention that his middle stint was his best; he probably didn’t realise quite how true his words were in the immediate aftermath of victory but the advantage he built up over Alonso between his two stops ultimately proved to be the key to the win).

Yet if that unravelling of the figures explains why Ferrari were compelled towards a strategy that would ultimately prove their unravelling, it’s less understandable precisely why the team were so slow to realise that it would be their undoing. Having only pitted seven laps before his team-mate (on lap 13 to 20), Felipe Massa was already a sitting duck with thirteen laps remaining (it’s at this point that he was overtaken by Nico Rosberg and Sergio Perez). Even taking into account Alonso’s manifest superiority, asking the Spaniard to run for over fifty laps without stopping was always likely to prove too much. The team claimed after the race that they were “covering Vettel”, but if that was the case then why didn’t they stop him