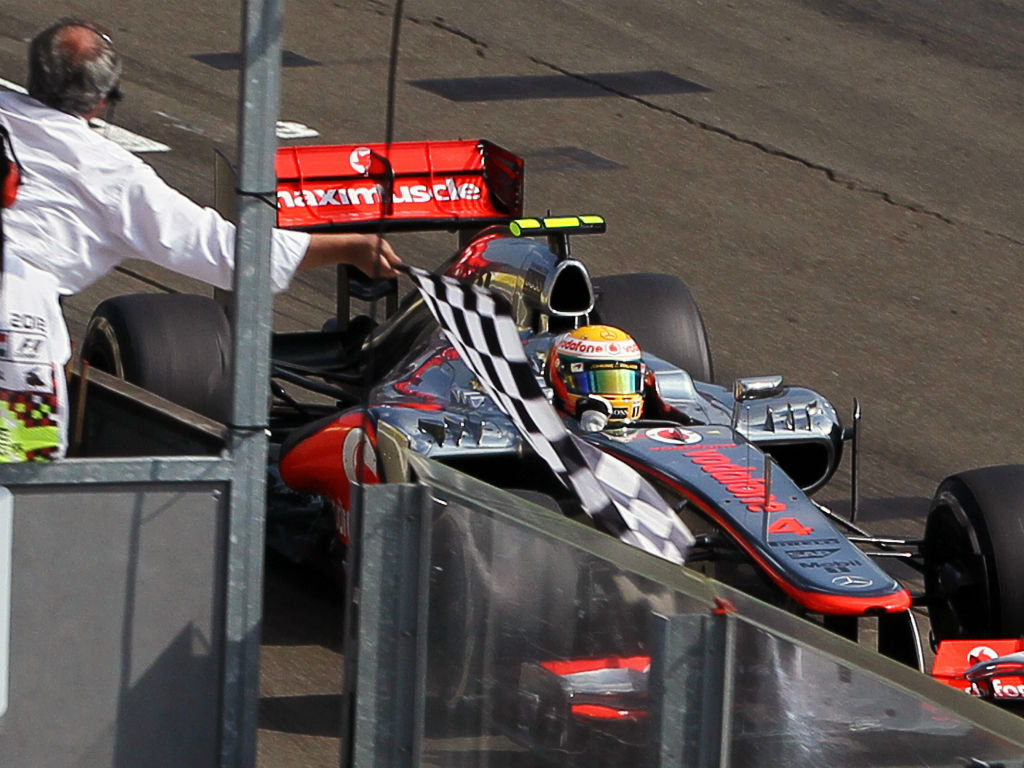 Lewis wins the race he had to win, Lotus change the game for Ferrari and Fernando, while Michael had a nightmare…

Lewis wins the race he had to win, Lotus change the game for Ferrari and Fernando, while Michael had a nightmare…

Faultless Hamilton returns to the title fight
Phew. Lewis Hamilton had to win in Hungary and he just about did. It was the closest of close-run things with the McLaren pushed to the brink by the two Lotuses, finally crossing the line just a solitary second ahead of Kimi Raikkonen. Though not one of the most exciting or dramatic victories of Hamilton’s F1 career, it was nonetheless one of the most impressive – in part because undramatic victories are not usually part of his feted repertoire but mainly because of the amount of pressure, both external and internal, which he had to withstand in order to claim the only result sufficient to revitalise his faltering title chances.

But even the anxiety of close pursuit paled alongside the internal pressure weighing down Hamilton as he made his own relentless pursuit of victory; sixty points in Fernando Alonso’s debt, the weekend was already a must-win matter even before his domination of Friday and Saturday transformed Sunday into a must-not-lose ultimatum. That’s pressure. If Hamilton couldn’t win at the end of a weekend when only a single tenth of a second in Practice Three stopped him claiming a clean sweep of the timesheets, then…

No matter. A Champion’s drive has returned Hamilton to the championship battle.

Lotus change the game for Ferrari and Fernando
Yet such is the size of the advantage that Alonso has built up over his former team-mate in the six weeks since Canada that, even on a weekend of dominance for one and struggle for the other, Hamilton was only able to reduce it by a quarter this Sunday. With just nine races remaining and Alonso still bullet-proof from unreliability, the scale of the challenge is stark. Hamilton probably needs a couple of DNFs for Alonso as much as he needs three or four wins to reach the summit again.

Or does he? The Ferrari’s lack of raw pace was brutally exposed in Budapest with the F2012 reduced to the fourth-fastest car in the field and Alonso almost nine-tenths of a second slower than Hamilton in qualifying. The Spaniard is a master of disguise but even Alonso cannot be expected to find a hiding place in the barren terrain of a dry Formula 1 track unless Ferrari wheel out their second major upgrade of the season for the September resumption. The emergence of Lotus as two-car bona fide frontrunners, both in Saturday and Sunday trim, is a game changer. From this far out, and Ferrari so far behind so many, Alonso won’t be able to win playing damage limitation.

Lotus change the game for Ferrari and Fernando, part two
The crux of the concern for Ferrari must be that since winning the development battle in Spain, when the still-born F2012 suddenly came alive, they have suffered a serious defeat to one of their lead rivals in almost every race since: to Red Bull in Valencia, to McLaren at Hockenheim and, here at the Hungaroring, to Lotus – who are also reputed have a major upgrade in the pipeline for Spa in addition to the swanky DRS-plus system they’ve been trialling during the last two weeks.

Ferrari are not only short of ammunition but they’re also under fire from all sides. Whilst there’s some solace in the relief that Red Bull, McLaren and Lotus will also take points off each other, the point remains that even Alonso is surely destined to lose his grip on the Championship unless the Ferrari is rapidly upgraded again.

As for Felipe Massa, meanwhile, the word on Budapest’s paddock street is that the decision has been taken to jettison the Brazilian at the end of the season. No wonder. As the season meanders into its break, Massa resides just fourteenth in the standings. Almost as critically, Ferrari fell to fourth in the Constructors’ Championship this Sunday. Even a one-driver team cannot overlook the exposure of such a glaring liability when it’s their name which is being debased.

Button’s calamity saves Hamilton
Conversely, the absence of a competitive team-mate remains a salient advantage in Alonso’s bid to win the Drivers’ Championship. Whereas Mark Webber and Sebastian Vettel have rewound to their 2010 parity and Lotus are prepared to cajole both of their drivers to the point where literal collision is inevitable, Alonso’s domination over Massa has made Ferrari his personal fiefdom. He is in no danger of ever suffering from sibling rivalry from the sister car.

Hamilton does not yet possess such security at McLaren, but the question will soon be asked about when and if Button will be prepared to play rear-gunner to his team-mate. Yet one of Sunday’s neat ironies was that Hamilton’s owed a large debt to Button not defending the lead McLaren because while the sudden decision to switch Jenson onto a three-stop strategy had the immediate and threatening effect of releasing a hitherto-frustrated Seb Vettel, it was also the instant realisation that three-stopping was an error on a circuit with worse traffic problems than Piccadilly Circus that stopped McLaren from proceeding with their plan to switch Hamilton. Had they done so, his title hopes would have been turn to dust. As the old saying goes, there’s more than one to skin a guinea pig.

Raikkonen enters the title fray as a light-coloured dark horse
If only Kimi Raikkonen could qualify a little better. Three times the Finn has finished in second place this season and in none of those races did start higher than fifth – and in Bahrain he started as low as eleventh. Throw his third-place finish at Germany from tenth into the mix and it’s abundantly clear where Kimi is lacking.

Yet such was his speed on Sunday that it appears what really scuppered his victory bid was Lotus’ failure to charge his KERS unit for the start of the race. After a slow exit out of the first corner and then a lock-up into the second, Raikkonen was passed by Alonso in one of the race’s few on-track overtaking moves. The result was catastrophic and race-losing: by the time Alonso finally pitted on lap eighteen to release the Finn from following the rear-wing of the F2012, Raikkonen had lost over fifteen seconds to Hamilton. After staying out for two extra laps in order to jump the Spaniard, Raikkonen was already six seconds clear on Alonso on lap 24 despite being in the process of saving up his tyres for the long second stint which transformed the race. The Lotus isn’t just quick, it also seemingly possesses the ability to keep the soft tyres in