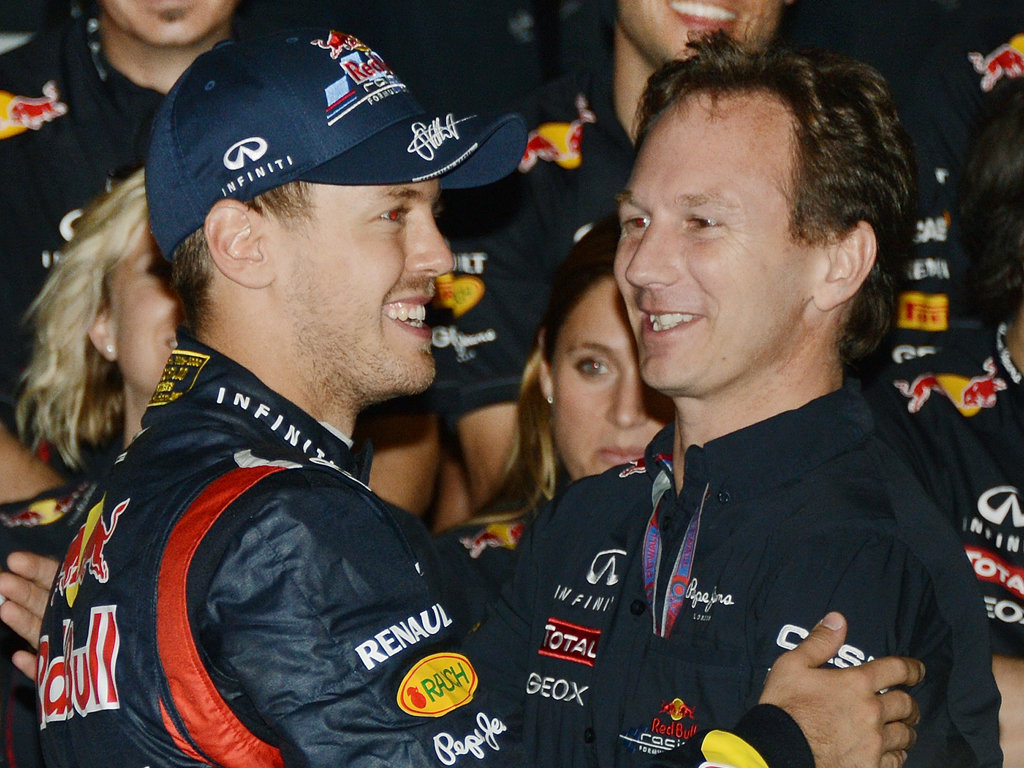 With Ferrari on the backfoot and Red Bull pulling out a secret double-DRS, Fernando Alonso is the World Championship leader in name alone…

With Ferrari on the backfoot and Red Bull pulling out a secret double-DRS, Fernando Alonso is the World Championship leader in name alone…

The title tide has turned
He might still be the World Championship leader but Fernando Alonso is no longer the title favourite. The four-point difference between Alonso and Sebastian Vettel is as good as parity, but it is the Red Bull driver who holds all the advantages entering the final stretch of the season: form, momentum, and superior pace.

With Ferrari unable to significantly upgrade their car since the summer break, Alonso’s position has become the loneliest in sport – that of the long-time leader who knows he is being caught by a faster rival but is powerless to respond. With the finishing line still not in sight, the Spaniard is losing a title fight that only the official standings still believes he is winning.

The giveaway of the championship’s true position is that the onus is now firmly on Ferrari to make the next move after Red Bull pulled a fast one out of their bag of development tricks. Undetected on its debut Singapore, their double-DRS can only be maximised in qualifying, but is another critical ingredient working in Vettel’s favour. In Japan, its benefit proved the critical difference between Vettel disappearing up the road without a hint of bother to a literally straightforward victory while Alonso ran into a whole heap of trouble from sixth on the grid.

It’s an immutable law of F1 that most cars start a race at roughly the same rate, which is why the pole-sitter more often not keeps his premier position through the first lap while those in the midfield often collide at the first corner. Boxed into the danger zone by Ferrari’s failure to unlock the F2012’s one-lap pace, Alonso has thus suffered two first-corner retirements in four races through no blatant fault of his own.

In Ferrari’s mitigation, Alonso was on course to qualify fourth before Kimi Raikkonen’s leery spin brought out the yellow flags, and their race pace, as quickly displayed by Felipe Massa, was formidable. Nevertheless, they were no match for the upgraded Red Bull, as the size of Vettel’s winning margin made plain. At over twenty seconds, it was the largest since Nico Rosberg’s victory in China, and the first back-to-back triumph of the entire campaign. We’re a long way past ominous now.

Vettel is now the default leader of the World Championship because Red Bull have won all of the latest skirmishes in the development war. There’s only one set of shoes, and one car, to be in with five races remaining.

Grosjean may not have any answers
The Romain Grosjean problem has turned into the worst kind of puzzle.

The shock-treatment of F1’s first race ban in almost twenty years has worn off in less than two weeks and the question now being asked after the Frenchman’s latest first-lap calamity isn’t ‘what can be done?’ but ‘can anything can be done?’. As they don’t separate culpability from involvement, the statistics don’t tell the full story, but neither do they lie. Seven first-lap crashes in fourteen races is far too many for Grosjean’s presence to be considered mere unfortunate coincidence.

The suspicion, borne of the belief that Grosjean’s vow in Singapore that he had learned his lesson was utterly sincere, must sadly be that the Frenchman is fundamentally flawed, handicapped by an innate shortcoming in close combat – a lack of composure? a lack of spatial awareness? – that makes him a danger to himself and plenty of others. Beyond suggesting that Lotus instruct their driver to undergo intensive training by tackling the M25 at rush-hour for a week, particularly the pullaway from the Dartford Tunnel tolls, it’s difficult to know of anything the team can do. Grosjean is desperately trying to stay out of trouble, but the more he tries, the more trouble he seems to run into – literally. It’s becoming the worst kind of problem: one without an apparent cure.

The great shame is that we’ve flashes of genuine brilliance from Grosjean this season, not least when he jousted fearlessly but cleanly with Fernando Alonso at Valencia, and plenty of pace too. But pace is pointless when a driver can’t finish the first lap. Grosjean is becoming the equivalent of a goalkeeper who is a world-class shot-stopper but who throws every cross into the back of his net.

Mercedes poised for an embarrassment of riches
Unless they have another Double Diffuser trick up their sleeves for 2013, Mercedes’ euphoria at capturing Hamilton must surely be turning to anxiety. Have they bitten off far more than they can chew? The team were pointless (literally and arguably metaphorically) in Japan and, on current form, will end the season sixth in the Constructors’ Championship before starting the next with arguably the best driver line-up on the grid. Good luck to any marriage counsellors called in to reconcile such an unbalanced state of affairs.

Perez faces steep learning curve
A weekend to forget for Sergio Perez. Even his progression into Saturday’s top-ten shoot-out produced discomfort given it served to focus attention on the fact that he had previously qualified higher than twelfth only once since Spain. It’s a stat which must alarm his future employers too. The similarity of Button and Perez’s softly-softly driving styles will pay a useful dividend in terms of set-up next year, but McLaren are always going to be fighting uphill battles if neither of their drivers can put the MP4-28 anywhere near pole. Button’s Saturday record this year is a 12-3 defeat.

Just as troubling was Perez’s ragged, rash attempt to overtake Hamilton around the outside of the hairpin, a move that could only have ended either in a collision or the gravel trap. Given the value of the ten points he was poised to collect for Sauber in the Constructors’ Championship, it was bordering on dumb. As Ferrari have already intimated once or twice, Perez still has much to learn – perhaps too much. It’s only at best that the youngster’s promotion is a year ahead of schedule.

Kobayashi and Massa seal their 2013 drives
Including a career-best result for one, and a two-year best for the other, Sunday’s result ought to be enough for both Kamui Kobayashi and Felipe Massa to retain their seats for another year. Whereas Perez was compelled into the strategy which secured second place at Monza because he failed to reach Q3, the first podium of Kobayashi’s career carried the additional credit and credibility of building on a successful Saturday. It was a complete performance which deserves to secure his place on the grid for 2013.

Having being denied entry to Q3 at Suzuka, albeit by less than a tenth of a second, Massa’s weekend wasn’t quite as complete, but the pace that he showed on Friday and Saturday morning laid the platform for his Sunday afternoon defeat of both McLarens in a straight fight.