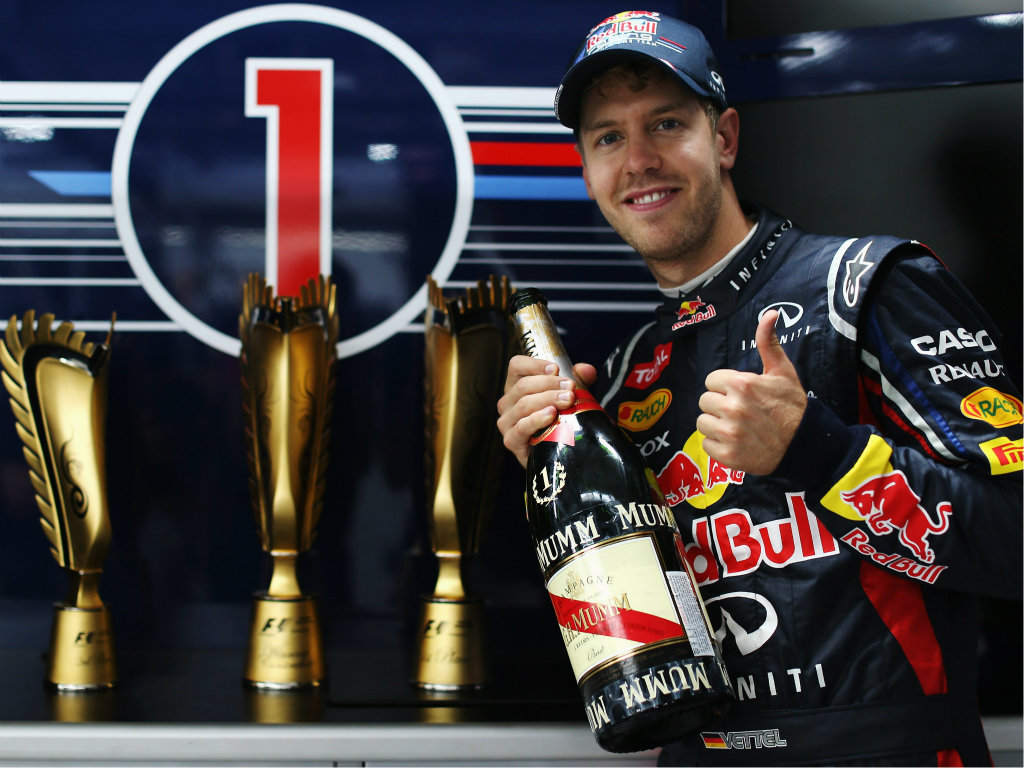 And then there were two
To play it by numbers: After three successive wins for Sebastian Vettel, and with four races remaining, there are only two drivers left in the title race and just one car to be in. The tide has well and truly turned.
The RB8 has been upgraded into a dominant force, its qualifying weakness fixed to decisive effect by the successful introduction of a Double DRS device which Lotus have abandoned after two months of futile experimentation. It’s a winning combination: the inspiration of Adrian Newey and the perspiration of a team willing to work around the clock to stay out in front. That’s why they are champions and why, in all likelihood, they will be again.

We should never have doubted them. But for a brief interlude at the start of the season when the team grappled with the new exhaust regulations, Red Bull have been F1’s dominant force for the past three-and-a-half years. Their recent upsurge is particularly ominous because they have found a new burst of energy at a time when each of their leading rivals – McLaren with their reliability woes, Lotus and Ferrari with development failures – have wavered. The harder it gets, the longer the season goes on, the better Red Bull do. They sprint to the line when everyone else stumbles at the end of a slog.

This is a team built for a sustained period of success; what we’re seeing now, with Vettel not yet at his peak and Toro Rosso operating as the breeding ground for Red Bull’s next generation of champions, may only be the tip of the iceberg.

As for this season, it’s already a long way back for Fernando Alonso even though his deficit to Vettel stands at an apparently-meager six points. The Spaniard remains beyond reproach, but there is only so much he can do in a car that has fallen a second off the pace. He needs more and he’s now admitting as much.

Carefully positioned in Ferrari’s press briefing on Saturday was an exhortation from their de facto team leader demanding another push and new parts for India. “We must improve it and I expect to see some updates coming, right from the next race in India,” proclaimed Fernando.

Alonso has morphed into the ultimate team player and it’s fair to assume that Fernando wouldn’t have demanded improvements unless he was confident that a shipment from Maranello will be on the plane to Delhi in two weeks’ time. Likelier still, however, is the prospect of Red Bull wheeling out yet another, more powerful suite of upgrades for a car which remains in constant evolution. It’s the stuff of champions – and what Red Bull do better than all the rest.

Is it too soon for Lewis to have second thoughts?
With Mercedes only faster than Caterham, HRT, Marussia and Williams this weekend, a decision that what was, at best, quirky two weeks ago, is already looking increasingly reckless – if not foolish. Lewis Hamilton, still arguably the fastest driver in the field, has seemingly committed to a team that is only avoiding going backwards because it is stuck in a rut.

Even more disconcertingly, the rationale behind his decision to leave McLaren is fast unravelling. Hamilton says he wants the challenge of trying to win in a bad car, but, as of this weekend, it’s a near certainty he will leave McLaren with a single championship after four years of failing of be a sufficiently-regular winner in a good car. Meanwhile, Vettel is poised to be crowned Sebastian the Third in a team threatening to rule F1 like despot. There’s an uncomfortable question begging to be asked: is Hamilton joining Mercedes for a more difficult challenge or running away from McLaren to avoid an even harder one?

The end can’t come too soon for Schumi
Because the career of the most successful driver in F1 history shouldn’t be ending like this – and he knows it. “It’s better to bow out when you’re battling for the title than to trundle around at the back of the field,” Schumacher declared as he called time on the first installment of his career in 2006 and how that warning must have resonated inside Michael’s Mercedes on Sunday as he duly trundled around at the back of field two seconds off the pace in a car not worthy of him, either in this incarnation or the last. Fortunate to finish 13th, Schumacher’s suffering was unabated ignominy.

What should be a dignified exit has instead turned into a squalid long goodbye. For a sport which prides itself on precision and attention to detail, it is bewildering that the two biggest transfer stories of the year – Hamilton’s move to Mercedes and Schumacher’s return to retirement – have been so poorly handled. Schumacher reputedly had ultra-brief notice of Mercedes’ plan to announce Hamilton’s capture; in return, he only informed Mercedes of his retirement on the morning he convened a hastily-assembled press conference to announce his exit at Suzuka.

At McLaren the situation is cringe-worthy and awkward, Hamilton’s discomfort manifesting itself in a series of ill-judged but revealing tweets and sixteen reserved bowling lanes going to waste in Japan. Three weeks after it was announced he was departing the team he has driven for since boyhood, Hamilton is still yet to speak to the man who mentored his progression into F1, Ron Dennis, or explain his decision to his race engineers in face-to-face talks.

It should have been handled so much better than this.

Money talks loudly on the driver merry-go-round
Poor Kamui Kobayashi, it seems he is just too poor for F1. Paid drivers are not a new phenomenon for F1 but they seem more valuable than ever – how else to reconcile Sergio Perez being good enough for McLaren and yet Kobayashi, who has out-qualified his team-mate more often than not this season and is just behind the Mexican in the standings, not being considered good enough for Sauber in 2013?

Pole position is on the wrong side of the grid at Yeongam
And as a result, all the leading drivers starting with an odd-numbered grid slot suffered at the start of Sunday’s grand prix: by the end of the first lap, every top-ten driver to have started on the right hand-side of the grid had lost position to the driver starting on his left.

While Vettel’s move past Webber illustrated the first flaw in the circuit’s design, with Sebastian fractionally behind his team-mate until they reached the braking zone when he simply out-positioned his team-mate because he held the inside line and Webber had further to go to reach the apex, Alonso’s pass on Hamilton into the second turn simply made it an absurdity. It’s bad enough to put the pole-sitter on the outside line for turn one, but close to bonkers to put him on the outside for both of the first two turns.

Decent is good for Toro Rosso, but not good enough for Red Bull
Although Jean-Eric Vergne’s