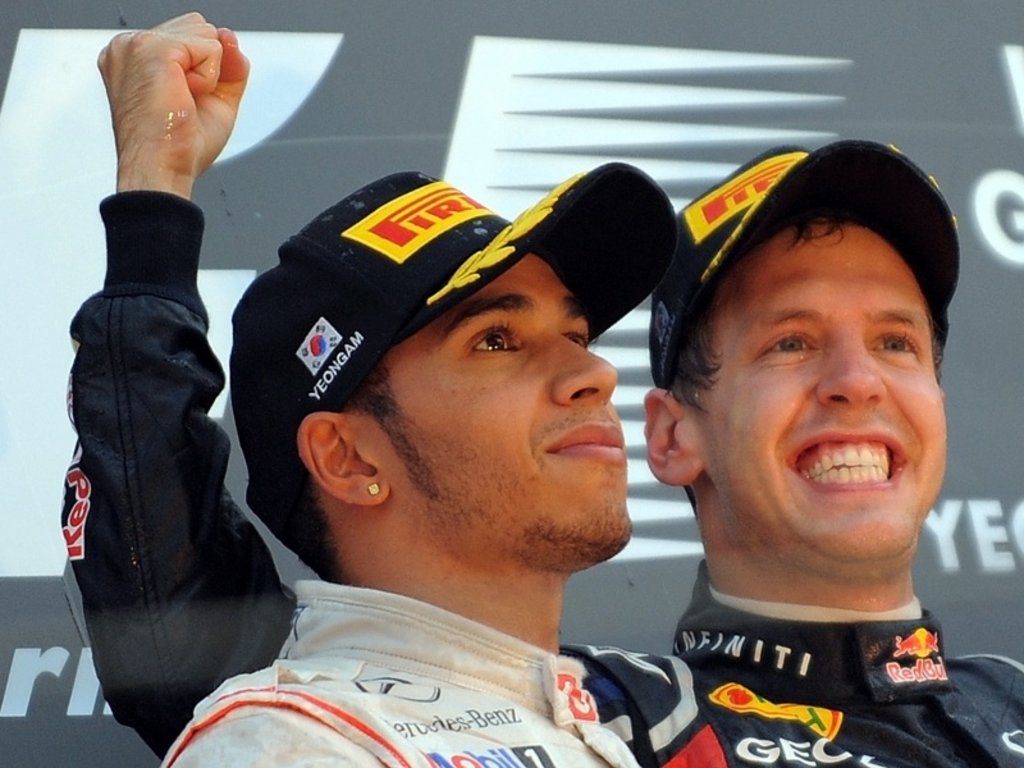 All smiles at the absence of Lewis’ grin, while the Champion delivers his message for 2012 loud and clear…

All smiles at the absence of Lewis’ grin, while the Champion delivers his message for 2012 loud and clear…

Vettel Starts Early
So the Champion is not resting on his laurels then.

Just a week after his latest coronation, Sebastian Vettel has started work on 2012 early. Three months before the calendar flips over for another year, Korea saw the Champion get down to business in emphatic fashion, sending out the message to his rivals that he will still be in 2012 what he has been throughout 2011: the man to beat. And with a tenth victory of the season now secured, he’s doing a pretty decent impression of being unbeatable at present time. Only once before in F1 history has a driver achieved so many victories in a single season.

What was so impressive about Vettel’s work this weekend was that it was just like any other. No relaxing, no letting up, just business as usual again even though all the hard work had been done and dusted. On Friday morning, when some of his competitors took one glance at the skies and darted off back to the comfort of a hospitality tent, Vettel was the first driver to climb into his car. Fast-forward two and a half days and Vettel was still enthusing over his victory as if it was the first of his career. One driver’s celebration is a warning to the rest: the Champion’s appetite for success is unquenchable, which is why he is a back-to-back World Champion and why he will start 2012 as favourite to claim a third.

The message has been sealed and delivered in imperious style: he means big business next year as well.

Red Bull Become The Main Men Of The Paddock
What a difference a year makes. When F1 paid its first visit to Korea last October, five drivers were still in contention for the World Championship, Sebastian was still thought of as the crash kid and Jenson Button was stuck in a vicious slump. “I just didn’t have any grip, at times I was the slowest person on the circuit. It’s been a sad grand prix,” he reflected on a twelfth-placed finish which effectively withdrew his candidature from the title fight. No such concerns for Fernando Alonso and Lewis Hamilton as they celebrated finishing first and second respectively on a day when Mark Webber crashed out and, in a moment difficult to believe in retrospect, Vettel lost the lead of a rain-soaked race when his engine exploded as darkness fell.

How much has changed since then. With the benefit of hindsight, it’s now clear to see Korea 2010 as the watershed moment in recent F1 history, marking the final hollow hurrah of the Alonso-Hamilton era before the domination of Vettel and Red Bull went into overdrive.

Since F1 departed Korea last October, a year of sustained dominance almost without flaw has followed serenely: 17 grands prix run, fourteen pole positions, twelve victories, sixteen podiums, two World Championships. And mistakes? From Vettel, a couple, though none of any real consequence (if they do occur, they tend to be in practice, which itself says plenty that is positive). From Red Bull? Well, and here’s the nub mostly overlooked in last week’s coronation, Korea 2010 also marked the last occasion when the Bulls failed their Champion. Not a single retirement failure since then, not a single glitch of cost. Gremlins have been exterminated from Milton Keynes with the jokers of the pitlane metamorphosing into the sport’s most serious outfit.

It’s an astonishing achievement for which the new Champions deserve complete credit.

Mercedes Know The Man They Want
So was there a subtle sub-plot to Ross Brawn’s announcement that the greatest test of Sebastian Vettel’s career will only occur when he accepts the challenge of driving a car that isn’t the best in the field? It didn’t seem so subtle when Brawn likened Vettel’s future predicament as an echo of the calling Michael Schumacher heard fifteen years ago when he gave up Benetton for the ultimate challenge of restoring Ferrari to the front.

Spotting what we’re reading between the lines? Clue: Replace ‘Schumacher’ with ‘Vettel’, ‘Benetton’ with ‘Red Bull’ and ‘Ferrari’ with ‘Mercedes’. Ross might be subtle, but we’re not.

And in any case, it’s an interesting point. Where does Vettel go next, literally and metaphorically? If he is to continue his development as a driver, and seal his reputation as a true Champion of the sport, he will surely have to take the gamble of leaving Red Bull’s comfort zone and pick up the gauntlet elsewhere. Mercedes, a big name of hitherto small results, and a German-based team currently piloted by two German drivers, is the obvious destination. The symmetry of directly replacing Schumacher to do a Schumacher may even seal the deal.

For the time being, such speculation is just that, though it would be equally naive to think that the prospect of luring Vettel ‘home’ has not already crossed Mercedes’ mind. To be the best, they will seek the best, and they won’t be shying in seeking it. As the acquisition of a third and fourth technical director to the team has recently reiterated, Mercedes are not lacking in ambition nor the means to express it.

Appearances can be deceptive but Hamilton was true to his Saturday demeanour in Sunday’s race, delivering a performance containing everything his supporters needed to see: focus, determination, tidiness, clarity. At belatedly last, it looks as if Hamilton is getting serious about fixing his mistakes. The pace we knew about; what was new and refreshing was the look of a driver trying to find his old self.

According to Martin Whitmarsh, Hamilton’s race was one of the best of his career, a description which reeked of obvious exaggeration for obvious reasons. Yet Hamilton deserves fulsome praise after all the criticism he has endured of late and his resolute defeat of Mark Webber and a far faster car was terrific viewing. And a tough test passed:

“I am proud of myself for keeping it together, not making mistakes. If you’re not leading the race, in judging yourself and how much pressure you are being put under, today was the ultimate test for me.

“If I had slipped up anywhere then he would have been gone, but I didn’t do that on one lap, and he was on my tail for 30 laps or something. So I’m very happy I kept my head together, stayed focused all weekend and out of trouble, which was a big positive for me.”

Kept my head together. So now we know: when he’s in a bad mood, the good news is that he’s in the mood.

Jenson Suffers For His Lack Of Practice
If there’s a minor criticism to be made of Hamilton’s performance, it’s that he left