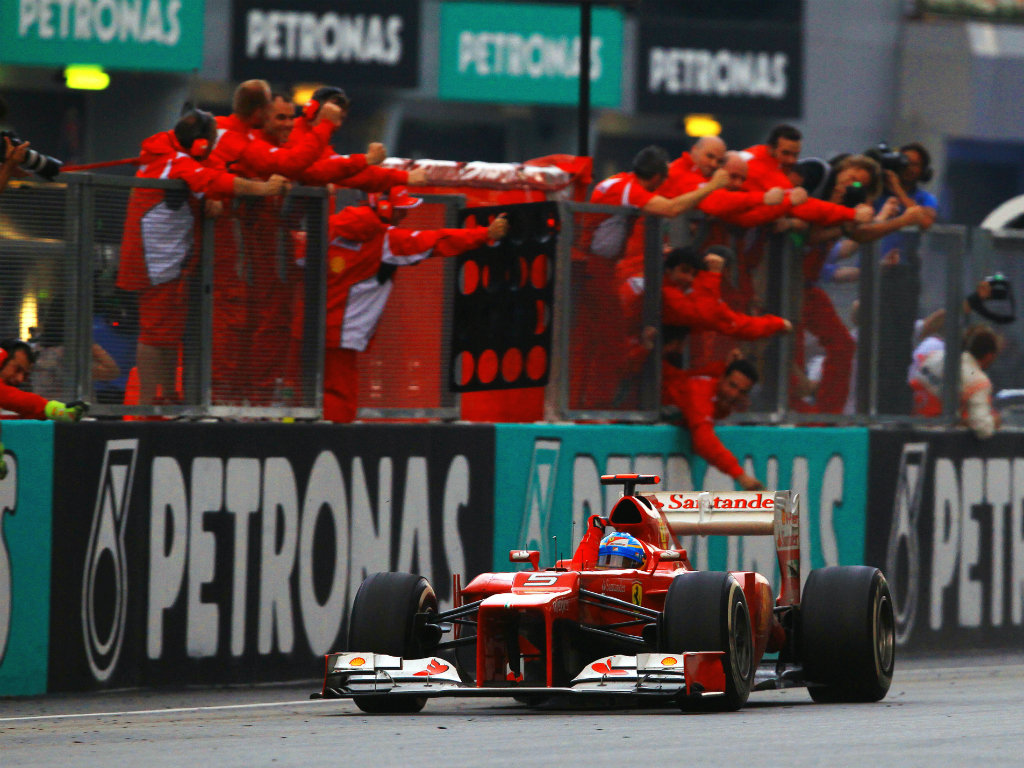 Driven Alonso makes his point
As much as anything else, this was a victory for Fernando Alonso’s response to his winter of adversity: dignified, resolute, determined. And calm. No tantrums, no accusations, just the repeated insistence that he still believed in his team, still believed in their ability to right a ghastly, malfunctioning wrong. Stay calm he did. And stay calm he duly did when the opportunity for the most unexpected of victories suddenly loomed out of the Malaysian GP gloom.

Keep calm and just carry on. He’s done it before and he’ll do it again.

That the Spaniard required a slice of luck along the way is not in argument. Above all else, he needed the rain to cloak the deficiencies of the F2012 and there’s no doubt that even Alonso would have been left high in the dry. But opportunism is a skill in its own underestimated right and it required a drive of sustained excellence, transcending the wretched F2012, to turn opportunity into full disguise of Ferrari’s opprobrium. There is only one good thing about the new Ferrari and it’s the Spaniard who has to sit in its cock-pit.

The great pity will be if Alonso’s victory is remembered for the victory that wasn’t and the naivety of Sauber’s ambiguous – but definitely misjudged – radio message to Sergio Perez shortly before the young Mexican fell off the track in gut-wrenching fashion. For what can’t go overlooked is that at the critical stage of the race, when Alonso maximised Ferrari’s fortune at the first round of pit-stops to build a ten-second lead over McLaren and what proved to be just enough of an advantage to withstand Perez’s charge, he was consistently three to five seconds quicker than Felipe Massa lap after sustained lap. Three to five. Massa is not a great, but it takes a great to make him look this ordinary.

“I don’t think it changes anything,” Alonso, still preaching the virtue of patience, said afterwards. “We are still in a position we don’t want to be in.”

Perez’s star is made
Victorious without victory, it matters not a jot in the grand scheme of F1 murky things that Sergio Perez did not win a race that belonged to him. Not a jot because F1 is such a murky business that Perez might have gained more by losing the victory he ought to have secured than he would have garnered with the real thing. There is no better result, after all, than the one which leaves everyone happy – and this was, in case you didn’t notice, a second-placed victory which left every interested party more than happy.

For Perez, the reward for a pitch-perfect audition to be Fernando’s next understudy is now an inevitability. After the drive of his life at the end of the week of his career, it has become a matter of when rather than if he will replace the hapless Massa and turn red.

The process of promotion from the massed ranks of Ferrari’s junior driver programme is already approaching its conclusion; after Malaysia, there can be no going back. That is his victory in the same way that Sauber were victorious with the best result of their independence and Ferrari were victors with the real thing. He has made it into the big time and it’s only the time of his arrival that remains to be determined.

Could it be as soon as China? Maybe. The suggestion that change is already imminent has taken hold and the momentum of the Perez bandwagon is building up to an unstoppable force. Having taken opportunistic hold of some breathing space, Ferrari’s next strategic decision must be fathoming how they maintain the feel-good factor generated by Alonso’s victory and make it last until the birth of the F2012 Mark Two in early May.

In the absence of any other obvious alternatives, bowing to public pressure and making Massa a necessary sacrifice may be the only available answer.

Lewis’ modesty is as unbecoming as his Melbourne misery
What a difference precisely the same result can make. Miserable in Melbourne, Lewis Hamilton’s reaction to third place this Sunday was markedly modest, with his exaggerated praise for “a very good job” by his McLaren team undoubtedly influenced far more by the pointless results of Jenson Button and Sebastian Vettel than actual events. It may be stretching towards another exaggeration to suggest that Hamilton, like Perez, ought to have won this Sunday, but there is no question that, as in Melbourne, he lost valuable time and critical position during the pit-stops and that once again his team erred on his behalf.

First and foremost, of course, Hamilton’s lead of the race was lost at his first stop when a combination of misjudged entrance and delayed exit – on account of Ferrari pitting both their drivers simultaneously – meant Alonso returned to the track ahead of both McLarens. One lap later, Perez pitted and returned in front of the McLaren – in effect, and somewhat ironically, benefiting from Massa’s roadblock to get the jump on the unfortunate Hamilton.

On a not entirely incidental note, these newly-fashionable simultaneous pitstops must surely be subject of some chatter in the Shanghai paddock in two weeks’ time because it seems a minor absurdity that a car can be held up by another team deliberately parking one of their cars; indeed, it’s not beyond question that simultaneous, rolling pit-stops will have to be banned in order to protect the integrity of the ‘unsafe release’ injunction. It’s a complicated matter but it’s also simple to see it as ripe for manipulation.

Yet Hamilton’s vis-a-vis unfortunate loss ran a little deeper than pedantic nitpicking because, as he belatedly appreciated in the post-race press conference, “on both the stops I probably could have come in a lap earlier.” On his second start, he definitely could have with McLaren only pitting their lead car two laps after the Toro Rosso, acting as guinea pig for the rest of the field, had started lighting up the timesheets with purple after taking on slicks. They were overly cautious when they needed to be brave.

Ultimately, Hamilton probably didn’t posses the pace to hold on for the win, but with a better strategy from the pitwall, and better work from his pitcrew (“In one of the pit stops I lost a good four or five seconds, just sitting there with some problem with the front right), he