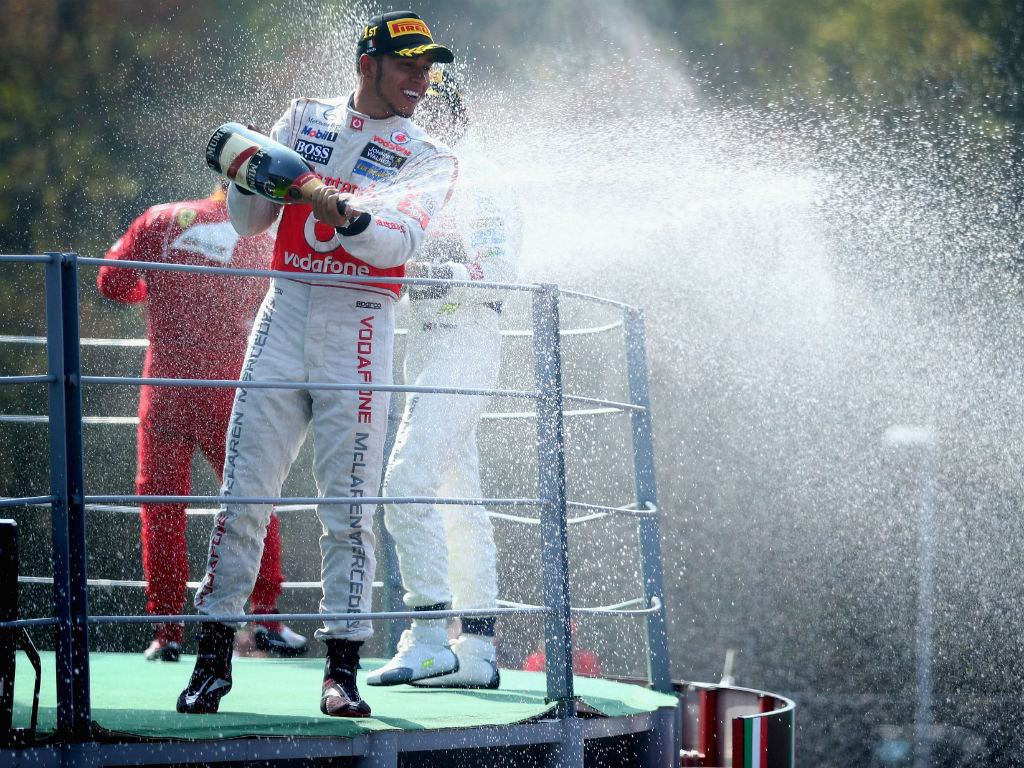 Driven Lewis Hamilton does what he does best, Red Bull lose their power, and Sergio Perez does his case good and bad…

Driven Lewis Hamilton does what he does best, Red Bull lose their power, and Sergio Perez does his case good and bad…

Driven Hamilton makes a great impression
From the ridiculousness of Spa to the sublime of Monza, if only Lewis Hamilton could spend all his time within the confines of a F1 car. If only he did all of his talking on a race track.

The contrast is what makes Hamilton so difficult to fathom, the baggage worth the hassle, and the hassle so very frustrating. No driver is an island and until Hamilton turns his talent into something more substantial than a solitary, unsatisfactory championship the mud will stick that too much of Hamilton the celebrity has corrosively seeped into the cockpit. Days like Sunday make it all the galling that it might have. If only he just stuck to driving motor-cars.

From the rough sounds of it, the decision Hamilton must soon make essentially boils down to deciding whether he prefers to see his future as a driver or a celebrity – whether he is more concerned with controlling his brand and image than race victories amounting to potential World Championships. For those of us hoping driven sense will win out, the glorious paradoxical reassurement of Monza was that Hamilton delivered such a finely-judged, well measured victory on a weekend when controversy and speculation ran wild all around him.

There’s still hope: the celebrity has not yet become the dominant personality and the future of the most talented driver of his generation may still be, first and foremost, the future of a F1 driver.

On Sunday, Hamilton drove at his fluent best, remorselessly extending his lead into a buffer of substance in the opening quarter before cruising thereafter and covering Sergio Perez’s charge to the chequered flag. It was in short, very, very impressive.

And while Hamilton’s future remains unresolved there was a nice – and typically paradoxical – touch after Sunday’s race as he mused on his own place in the history books at a time when he says he hasn’t even started to consider where he wants to be in 2013.

“Since I started in Formula 1, Monza has been one of the races I always wanted to win at,” he reflected. “To finally put my name on that list makes me feel extremely proud, but also very humble. It’s such an incredible, historic circuit and all the great racing drivers have won here.”

They have – and the decision Hamilton is belatedly due to make on his future will soon reveal just how much he is prepared to give up in order to achieve promotion to F1’s highest echelon.

Title race will make one a legend
But it’s not only Hamilton who is currently occupied in a pursuit of legendary greatness. Another title triumph – making him the youngest three-time champion in the sport’s history – would confer elite status on Sebastian Vettel just as a third World Championship would cement Fernando Alonso’s standing at the pinnacle of the sport.

Whether the three central protagonists in the championship battle realise it or not, the next three months are shaping up to be decisive for their reputations; the harder each of them push for the title, the more two of them stand to lose and one of them – assuming neither Kimi Raikkonen nor Mark Webber gate-crash the party – will gain.

Intriguingly, judging by his description of Sunday’s result as “perfect for the championship”, Alonso still regards Vettel and not Hamilton as his main challenger. Yet it is Hamilton who now follows the Spaniard in the standings and it is the MP4-27, victorious in each of the last three races, which has seemingly been developed into the class of the field.

We’re entering the stage of the season where every race breathlessly becomes the biggest of the year but Singapore promises to be particularly fascinating for the promised upgrades from Ferrari for a car that was unexpectedly quick this weekend, any signs that McLaren have already peaked, and the need for Red Bull to capitalise from circuit characteristics which ought to suit the faltering RB8. If the World Champion and the World Champions fail to profit in two weeks, Alonso really will have to reconsider his pecking order of challengers.

Red Bull reach decisive period
Yet before we reach Singapore, what sort of conclusions should we reach on Red Bull’s loss of form? Tepid ones, because only in two weeks’ time will it be possible to draw any firm conclusions on whether the engine-mapping furore which exploded on the morning of the German GP has played a significant part in their recent relative decline. The facts are suggestive – for the four races before the FIA closed the loophole, Vettel qualified on pole twice as well as fourth and second; in the three since the closure, he’s only lined up third, tenth and fifth.

On the other hand, the data pool remains small, Vettel was formidably fast in race trim last Sunday at Spa, and his struggles this weekend could almost exclusively be attributed to the deficiencies of his Renault engine. If a loss of 10mph to his rivals along the straights – only the HRTs were slower – at a circuit where the cars run for 80% at full throttle wasn’t bad enough, the alternator failure which retired Vettel from the race was the third such malfunction this season – with the first costing him a near-certain victory at Valencia.

Red Bull might not be entirely innocent in the matter, with paddock rumour suggesting that the tight packaging of its KERS unit may be a reason why their alternator keeps failing, but Christian Horner’s frustration was plain on Sunday night: “It is very disappointing. It was replaced on Saturday morning, a new one was put on the car for the race and unfortunately that’s also failed which is a repeat problem from Valencia earlier in the season which is especially disappointing.” Renault have duly apologised.

Mark Webber, meanwhile, has been handicapped by two gearbox changes in the last four events, costing him ten grid slots. The upshot is a team on the back-foot and in urgent need of points-scoring remedy. They’ll be the first into the spotlight under the Singapore lights.

Perez makes his move at Kobayashi’s expense
Pity Kamui Kobayashi. The better he does in qualifying, the worse it seems to get for him on race-day: third on the grid at China amounted to a single point a day later, seventh in qualifying at Valencia heralded mid-race retirement, the career-high of second for the Belgian GP brought instant withdrawal symptoms at the first corner, and this weekend a very respectable eighth in qualifying only resulted in the indignity of a thorough thrashing at the hands of his team-mate on Sunday afternoon.