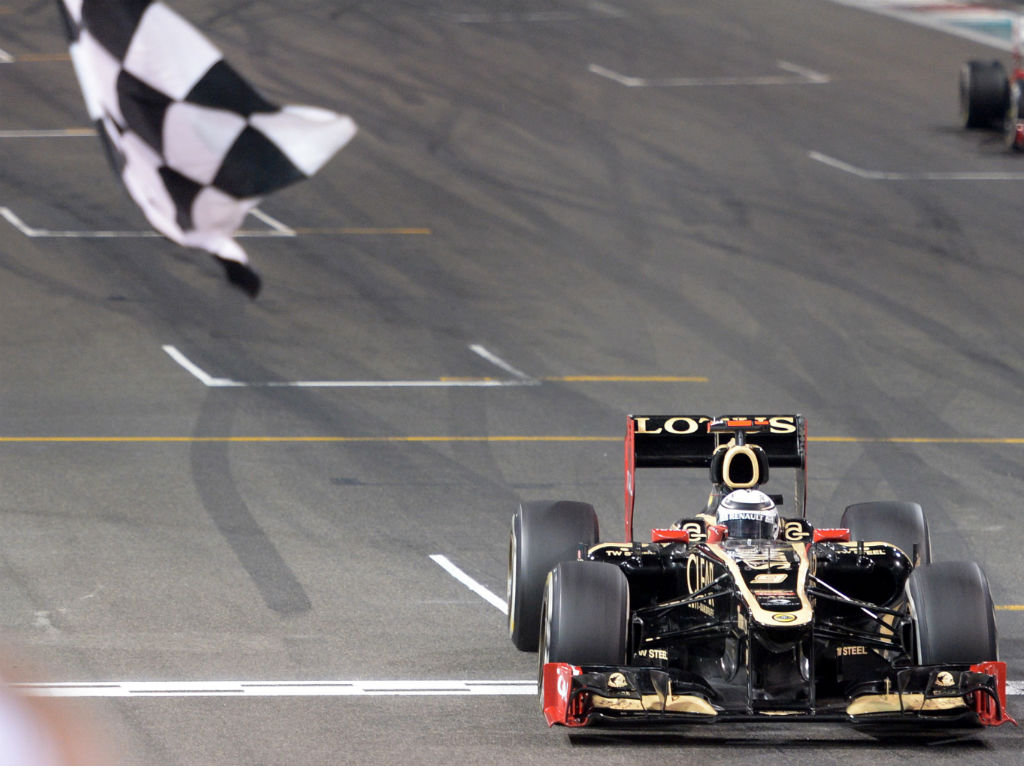 Kimi Raikkonen: he really does know what he is doing
Welcome back to the big time.

If the cheap line is that only Raikkonen could lead a grand prix whilst simultaneously providing comedy gold, the serious retort has to be that only a driver of his rare skill could deliver the race’s fastest lap immediately after being released from the cooling-down shackles of a Safety Car. Memo to Lotus: you really don’t need to tell Kimi how to keep his tyres in working order.

The message to the sport as a whole should also be heeded loud and clear: despite retiring from view to spend two years digging rally cars out of snowy ditches, Raikkonen remains the real deal.

His speed is formidable and, after inheriting the lead when Lewis Hamilton retired, he controlled the race in masterful fashion. His talent is supreme and, although there are always too few World titles for all the worthy and deserving causes, too good for his career to end with just a solitary Championship.

In F1, the hardest tenth is the final tenth that separates the frontrunners from the winners, but if Lotus can improve their package next season by as little as a couple of percentage points then Raikkonen still has everything required to win more than just the occasional grand prix.

The ‘lucky’ argument of Sebastian Vettel’s race is a smokescreen
2000 words later, analysis of whether Sebastian Vettel was lucky to go from pitlane to podium in Sunday’s grand prix belatedly speaks for itself. But for all the arguments the debate has generated, the micro-question is surely a smokescreen for the the macro-matter of whether Vettel is a deserved two- or three-time World Champion.

The suspicion must be that, as a general rule of thumb, those who believe the German to have been lucky on Sunday will declare him undeserving of such gilded status, while those who insist the Red Bull driver ought to be considered a great will also say he drove a great race this weekend.

Nobody seems willing to budge and, as such, what this week’s debate has also inadvertently revealed is that the middleground between Vettel’s supporters and critics is narrowing to the point of extinction; how many people, for instance, have simply sat on the fence to opine that Vettel drove a very good race, if not quite a great one?

As ever, Hamilton continues to divide like no other in F1, but if this week’s discussions answered anything beyond dispute then it’s that Vettel can now be immediately identitifed as the sport’s second-most divisive driver.

Lewis Hamilton given a hundred reasons to depart McLaren
It’s a point which doesn’t just keep on repeating but actually keeps on gaining in number: at a rough count, unreliability and pitlane errors have combined to cost Hamilton in excess of one hundred points this season.

It’s an astonishing shortfall with McLaren’s season subsiding into a staggering tale of foot-shooting and a wrenching reminder that there is far more to success in F1 than just speed.

It’s a tale which will also surely diminish the wrench Hamilton will feel in a couple of months when he turns his back on McLaren to join Mercedes. To return to an earlier argument, perhaps it was no coincidence that Hamilton took the decision to abandon his familiar Woking ship in the week which followed his retirement from the lead of the Singapore GP. If he mused then that if he couldn’t win when driving the grid’s fastest car then he might as well try an altogether different approach, Sunday’s head-shaking retirement will at least have carried the consolation of endorsement.

Fernando losing out on the title the day before
If only the F2012 had some qualifying pace. The Ferrari team twice broke the Yas Marina curfew this weekend to throw the Maranello kitchen sink at their car but only Vettel’s late-night expulsion moved Alonso into the sixth position he has averaged on a Saturday throughout this season.

In the eighteen races to date, Alonso has improved position on Sunday from Saturday on fourteen occasions, with two of the four exceptions race-ending crashes in part the dangerous consequence of a midfield starting-place. If, as remains likely, Alonso loses the title to Sebastian, the ‘when’ will not be either Austin or Interlagos, but a Saturday in general.

This weekend’s disparity was particularly stark with Alonso over nine-tenths adfrift of Hamilton’s pole-sitting pace on Saturday but just eight-tenths of a second behind Raikkonen when the chequered flag fell a day later.

It’s too simplistic just to say that Ferrari should dilute their race pace in order to find some extra single-lap speed, but that’s a compromise that the team and Alonso would surely accept.

After all, what we’ve seen time after time this season is that winning from the front is mostly a straightforward affair: but for the retirements of Hamilton in Singapore and this weekend then, with the exception of Korea which Vettel led from the first corner onwards, every race since July would have been won from pole.

Slowly shouldn’t do it in F1 – even on a Saturday night
Easiest conclusion of the weekend: it shouldn’t have taken over four hours for the stewards to belatedly announce the results of a qualifying session which took just an hour to complete.

With the interminable void inevitably filled by the usual slew of conspiracy theories and accusations of favouritism, the world’s fastest sport can’t be this slow to put its house in order. The complicating delay was that not only was Vettel’s RB8 literally at the back of the parc ferme queue but that his car was subject to two separate investigations: the first into why it stopped out on track, the second into the amount of fuel it was available to discharge for scrutineering. But four hours? F1 either needs quicker housekeepers or more of them.

Pirelli have been beaten in a game they cannot win
How long ago the start of the season now seems when the teams were unable to understand, let alone master, the new Pirelli tyres. The tide has now turned, with the winning strategy both in India and Abu Dhabi a comfortable one-stopper, and Pirelli waving the white flag in the face of F1’s relentless march forwards. “The pace of development in Formula One is unrivalled, and we can see this in the way that all the teams have really got on top of our tyres now,” motorsport director Paul Hembery confessed this weekend.

The game is up. Whereas there was too much degradation at the start of the season, there is now too little. The right balance was probably struck midway through the season, but given that we scarcely noticed, the absence of realisation or recognition only goes to show what a thankless task