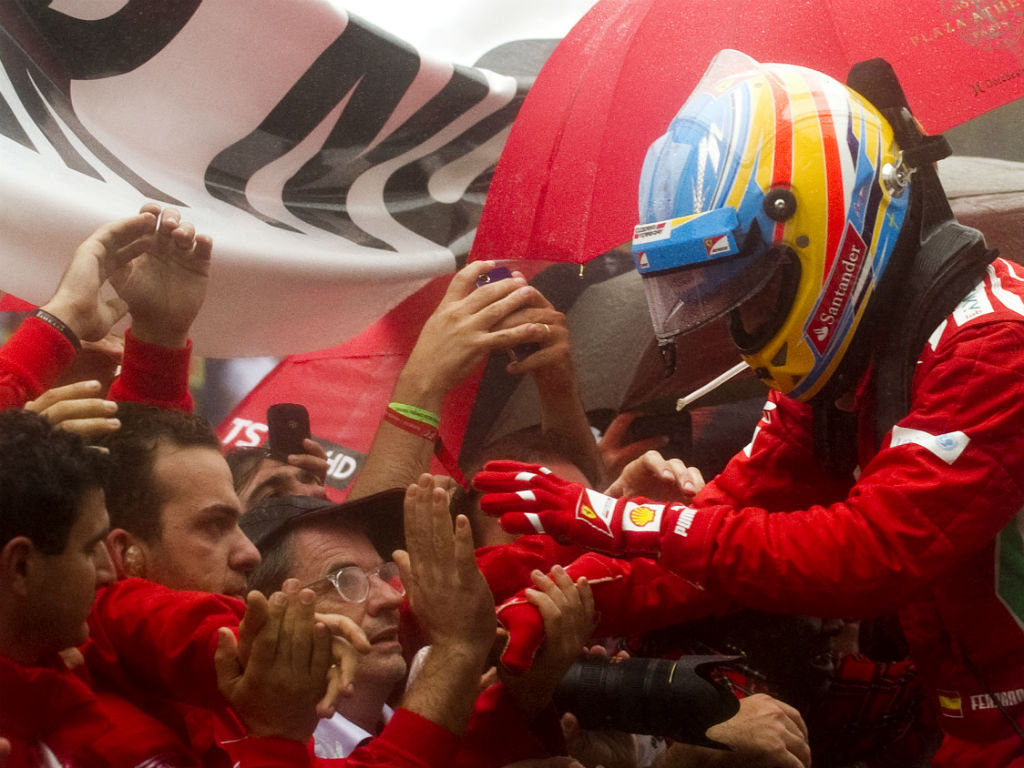 Alonso loses out to a worthy champion
Oh 2012, how we’re going to miss you. Brazil’s epic conclusion was a fitting finale for an epic season which had everything and which just kept on giving.

The victor was deserved, but that conclusion was guaranteed long before the curtain fell; only Fernando Alonso or Sebastian Vettel could have been crowned champion at Interlagos and just because Ferrari’s brilliant Spaniard warranted the title doesn’t mean the German didn’t deserve the crown for himself as well.

In very different ways, with polar-opposite styles of personality, and usually starting from different parts of the grid, the genius and the jester were united by their shared claim for the elite ranking of triple World Champion. The beautiful satisfaction of 2012 was that no matter how it ended, it had to end well.

Partly because of Alonso’s undisputed brilliance and partly because of the nagging unease that Vettel has had it a little too easy so far in his career, it’s been easy to overlook just how well Sebastian has driven this year.

He has made very few mistakes, run into form at a stage of the season when many of his peers have run out of steam, and triumphed in a car which, although usually far faster than Alonso’s, was far from dominant. Nonetheless, he’s won more races than any other driver this term, with five to Alonso’s three, a statistic which ought to carry a degree of weight in the final reckoning. And in two of the last three races, he’s come from the back of the field to finish in the points. Luck has played its own beneficial role, but a good champion makes his own luck.

Without question, Alonso has transcended his machinery, but he’s also had the advantage of being partnered by a team-mate who only found pace and a degree of competitiveness in the final third of the campaign. Even then, Felipe Massa remained wholly subordinate to his superior, ceding grid position in America and then running as Alonso’s rear-gunner in Brazil. By consistent contrast, Webber was far more of a match and a challenge to Vettel.

Moreover, the shortcomings of the F2012 have surely been exaggerated. Yes, Alonso’s car was almost always a dog on Saturdays, but time after time it found its bite on race day and, with the honest-exception of a broken roll bar at Monza, never once did it betray its master. While two alternator failures cost Vettel over forty points, Alonso’s Ferrari remained a bullet-proof model of reliability for eight successive months. That shouldn’t be so readily overlooked when considering their respective claims to the title.

The pity is that there could only be one winner and that one man’s just desserts was always going to end with a bitter pill for the other. Unlike at Abu Dhabi three years ago when a botched strategy cost him the title, Alonso at least has the satisfaction of knowing he could have done no more this year. Nor could have Lewis Hamilton, whose season was encapsulated by his luckless demise from the lead of Sunday’s race. He, like Alonso, deserved better. That’s just the way sport is sometimes. And that’s not to say Vettel is an underserved champion.

The difficulty of seeing what you want to see
If there is nothing on this planet as myopic as man, there is surely nobody quite as accomplished at the art of seeing what they want to see as a sports fan. It’s a guarantee already confirmed that while Vettel fans will consider his pass on Kamui Kobayashi to have been unequivocally legal, Alonso supporters will view the incident as taking place under yellow flags.

All that can be said with any degree of certainty is that the footage is ambiguous and the wonder is that it can ever be acceptable for a system of semaphore to be open to interpretation and ambiguity. Put bluntly: shouldn’t the marshals try a few different colours rather than involve yellow twice? There’s also surely a pertinent question to be asked about the need for a warning that the track is slippery after rain. If drivers need advice of that ilk they probably shouldn’t be allowed behind the wheel of any type of motor vehicle, never mind a very fast one.

The disappointment, all the while, is that in the absence of transparency from the stewards’ office so much official scrutiny is left open to another layer of interpretation. Where, for stark illustration, was the confirmation that they were aware of the lap-nine Kobayashi incident but deemed it legal? And, moving on, how to tally the stewards’ near-instantaneous punishment of Hulkenberg with their apparent refusal to give Vettel’s collision into the side of Bruno Senna’s Williams on the first lap another look?

It was a clumsy piece of driving, very possibly borne of panic, and, given that a precedent was set in Spa for stewards to punish first-lap infringements, Vettel was almost as fortunate to escape official sanction as he was not to suffer race-ending damage. Had roles been reversed, Senna would surely have been punished in much the same way that Grosjean was suspended for “eliminating leading championship contenders” at the start in Belgium.

One rule for them, one for the also-rans? Maybe not, because, in another under-publicised ruling, the Interlagos stewards concluded that Grosjean’s tangle during qualifying with Pedro de la Rosa was a racing incident. Taking a consistent line, Vettel’s lunge for the Turn Four apex might have been interpreted along similar lines. It was clumsy, yes, but perhaps not so bad as to deserve a penalty.

Either way, a little clarity and the occasional explanation along the way would be a very welcome thing.

Connections run deep in F1
Nico Hulkenberg has a lot to answer for. From McLaren’s perspective, he has almost