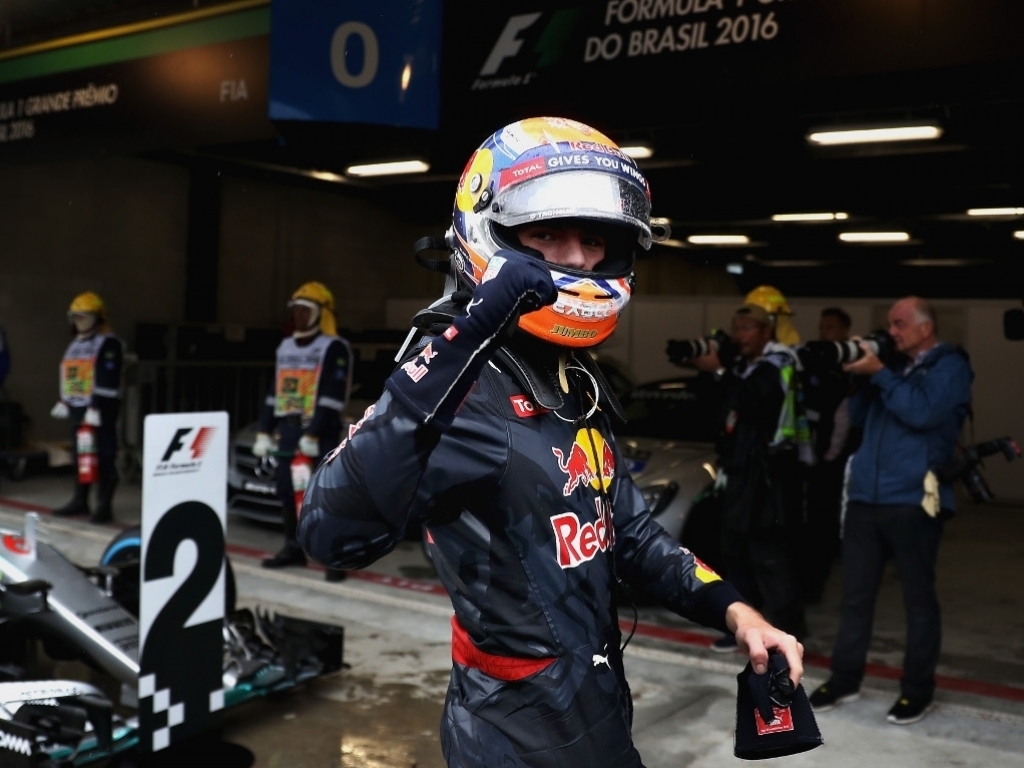 Driver of the Day for Max, farewell to Felipe and congrats to the other Felipe.

Donington 1993. Barcelona 1995. Monza 2008. Interlagos 2016
Max Verstappen finished third on Sunday but by all accounts put in the drive of the day. “Mega…You’re witnessing something special today,” his boss Christian Horner said.

Special is an understatement. The teenager’s drive in the wet is among some of the all-time great drives in adverse weather and reminiscent of Ayrton Senna’s spectacular drive at Donington in 1993, Michael Schumacher’s maiden victory for Ferrari in the rain in Spain two years later, and Sebastian Vettel’s remarkable win for Toro Rosso eight seasons ago.

As this column has noted before, Verstappen has an impressive toolkit. In 2016 he has proved he can defend, attack, overtake. And he has got race craft and one-lap pace too. On the evidence available at Interlagos he can do it all in the wet too.

Any one of the Red Bull star’s overtakes could be considered the move of the grand prix.

The teenager’s smart pass up the inside of Kimi Raikkonen at the start of the race was remarkable, while his late move past team-mate Daniel Ricciardo at Mughelo was a beauty. But the best of them all? Probably his lap 38 pass on Nico Rosberg around the outside of T13.

He may not have won the race but young Max won hearts and minds. It was not a flawless race, though. Red Bull got it wrong by putting him on inters and even Verstappen’s mistake heading on to the main straight – which Rosberg described as “Max pointing 90 degrees towards the wall” was saved in spectacular fashion.

But still a dark day for F1?
Ominous gray clouds over Interlagos set the tone on Sunday as race control started the grand prix behind the safety car and red flagged it twice.

The Brazilian fans collectively gave this decision the thumbs down and fans watching the live broadcast also heard several team radio messages saying that the conditions were good enough for racing when race control stopped the race.

While safety should be paramount, the second red flag befuddled fans, drivers, and analysts because the track conditions did not seem to be much worse then than before. Indeed, the conditions were worse towards the end of the race. The inconsistency not only detracted from the spectacle but was just baffling at times.

Considering the moment Rosberg had on lap 46 – when he got into a slide through turn 12 – the Championship leader will be happy that he goes to Abu Dhabi with his lead intact.

Hamilton used the post-race interview to warn Rosberg that he was “hunting” and then described the race win as “easy”. The mind games may be entertaining to watch but the reality is that Rosberg needs no more than a third place to take the Championship regardless of what Hamilton does at Yas Marina.

Brazil bids farewell to Felipe
Felipe Massa missed out on the title in the most dramatic circumstances at Interlagos in 2008. Much like the emotion of eight years ago, Sunday’s Brazilian’s final Brazilian Grand Prix did not end with a fairytale result. Instead, Massa lost control of his Williams and crashed out in the third sector.

However, the safety car that followed did give Massa an opportunity to walk back to the paddock and receive an ovation from his home fans. Once in the pits, his former team Ferrari and Mercedes created a guard of honour before he met his family.

These unprecedented scenes during a race were a fitting tribute to an excellent driver and wonderful servant to F1. And although his last win came in Brazil in 2008, it is worth noting that Massa won 11 times in the sport and took a step on the podium on 41 occasions.

He should be remembered for these numbers as much as the 2008 heartbreak and the “Fernando is faster than you” debacle.

A good day for the underdogs
And a good day for another Felipe. Felipe Nasr’s ninth place gave Sauber their first points in almost 400 days and helped the Hinwil team pass Manor in the Constructors’ standings.

Sauber will hope that these two points will help them avoid finishing last in the Constructors – something that they have avoided every season since joining the F1 field in 1993.

Moreover, avoiding the wooden spoon is worth tens of millions of dollars in prize money, which is crucial given Sauber’s continuing financial woes.

While he ran as high as fourth after the final safety car, Carlos Sainz’s sixth place was also a fine reward for a driver who has enjoyed a brilliant campaign in 2016.

Sergio Perez’s fourth and Manor’s Esteban Ocon also impressed. The man who will be paired with Perez in 2017 justified Force India’s decision to sign him by running in the points, ultimately finishing 12th, and beating his highly rated team-mate Pascal Wehrlein quite comfortably.

Romain ruins, but worse for Esteban
The running in the wet was treacherous and challenging. Among those caught out in the race were Massa, Fernando Alonso, Sebastian Vettel, Kimi Raikkonen, and Marcus Ericsson. Some embarrassing moments for all concerned.

However, at least they made it to the grid. Romain Grosjean lost control of his Haas on his sighter lap and instead of ending up on the grid ended up in the barrier and out of the race before it had started.

Meanwhile, Esteban Gutierrez’s public divorce from Haas culminated with a physical confrontation with team boss Guenther Steiner after the Mexican retired. In case anyone needs reminding, F1 is a brutal business.