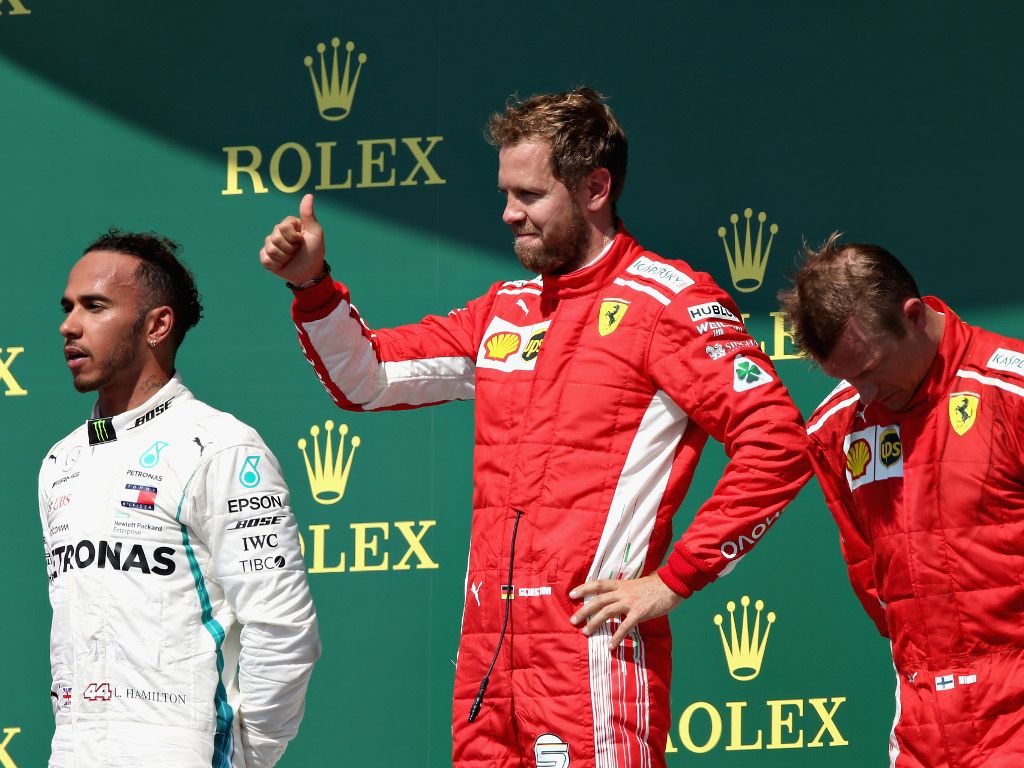 Car number 44 may have been the favourite to win in Britain, with Lewis Hamilton having won four straight British Grands Prix and qualifying on pole position. But Sebastian Vettel who triumphed thanks to a blistering start and a champion’s courage to pass Valtteri Bottas late on to claim win number 4 of the season.

This in itself is important as if he and Hamilton finish the season level on points, the Championship will be decided on race wins – and Vettel now has one more than his rival. Silverstone is also the second race in a row in which Vettel has made a decisive pass for position: though this time it was for the race victory.

Remember, Vettel has been criticised before as being a one-trick pony who can’t overtake. Yet his move on Bottas five laps from the flag was as brave as it was opportunistic. The Ferrari driver capitalised on Bottas’s oversteer through The Loop to get into the Mercedes slipstream before launching up the inside of Brooklands.

The Silver Arrows have swept all comers since 2014 and aren’t a team well equipped to deal with failure. Hamilton’s post-race comment suggesting “interesting tactics” from Ferrari and Toto Wolff’s remark that “this is the second time they take us out…is it deliberate or incompetent” both seem like attempts to pour petrol on a non-existent fire. Kimi Raikkonen owned up to the first-lap error that resulted in contact with Hamilton and left the Mercedes driver dead last.

Raikkonen described his 10-second penalty as “fair” and it’s worth noting that Vettel was sanctioned with a similar penalty when he collided with Bottas on lap 1 in France. The Mercedes suggestion that Ferrari are villains does nothing put underscore that Mercedes are finding it increasingly difficult to cope with the pressure from both Ferrari and Red Bull. In contemporary F1 there is no benefit in “taking out” rivals and the suggestion that Ferrari would do so is patently absurd given the penalties that stewards impose – not to mention the risk of car damage.

Market ready to respond to form

Esteban Ocon finished an excellent seventh to quietly move ahead of Force India’s team-mate Sergio Perez in the standings. The shift towards Ocon has been one of the most fascinating if under-reported stories of 2018. The Frenchman has outqualfied Perez in the last seven races and has beaten the Mexican 5-1 in races in which both have finished. Rumours are rife that Renault are reviewing an option to sign Ocon.

Daniel Ricciardo, meanwhile, has said he is likely to stay with Red Bull because other options have disappeared.

Raikkonen is struggling to put together a clean weekend but his form has been red hot since rumours emerged that Ferrari are ready to replace him with Charles Leclerc. Leclerc ran as high as seventh early in the British Grand Prix but was unlucky to retire with a right-rear problem after his first pit stop. Nonetheless, the young Sauber man did enough to again underline his credentials as one of the hottest properties on the market.

A penny for the stewards’ thoughts on why Vettel received a five-second penalty for making contact with Bottas in Paul Ricard, while Raikkonen was hit with a 10-second penalty at Silverstone for what can only be described as similar incidents with similar results. The drivers deserve more consistency, and so do the fans.

Mr Unlucky is unlucky yet again

Bottas was unfortunate to miss out on the win at Silverstone. Mercedes’s decision not to pit the Finn when the safety car was deployed meant that he had to fend off Vettel and co with slower and older tyres. This was the fourth race he could have – perhaps should have – won this season. In Bahrain he couldn’t get past Vettel despite a late effort, while in Baku and Shanghai a puncture and late safety car respectively stole certain victories from him. The Championship would look rather different had he converted even two of these performances into wins.

Post-race interviews: nothing but a cringefest

Liberty Media should be lauded for trying to improve the spectacle and when considering the last two races it’s clear that F1 is still a great product despite its various issues. But Liberty’s post-race interviews need to binned. It’s hard to think of anything worse than seeing presenters mumble awkwardly while trying to cut short driver celebrations. One can almost sympathise with Hamilton for missing the interview after the race on Sunday.

“It’s just a normal day at the office” is how Haas team boss Guenther Steiner described Friday after Romain Grosjean crashed in practice and Kevin Magnussen was summoned by the stewards for an alleged blocking incident. The American team have the fourth-fastest car on the grid but have made a habit of failing to capitalise on the car’s latent pace. Britain was no different as the Haas drivers made contact on lap 1, and then Grosjean crashed out later in an incident with Carlos Sainz. Although Magnussen salvaged ninth, it could have been much better for Haas considering they started the race seventh and eighth.