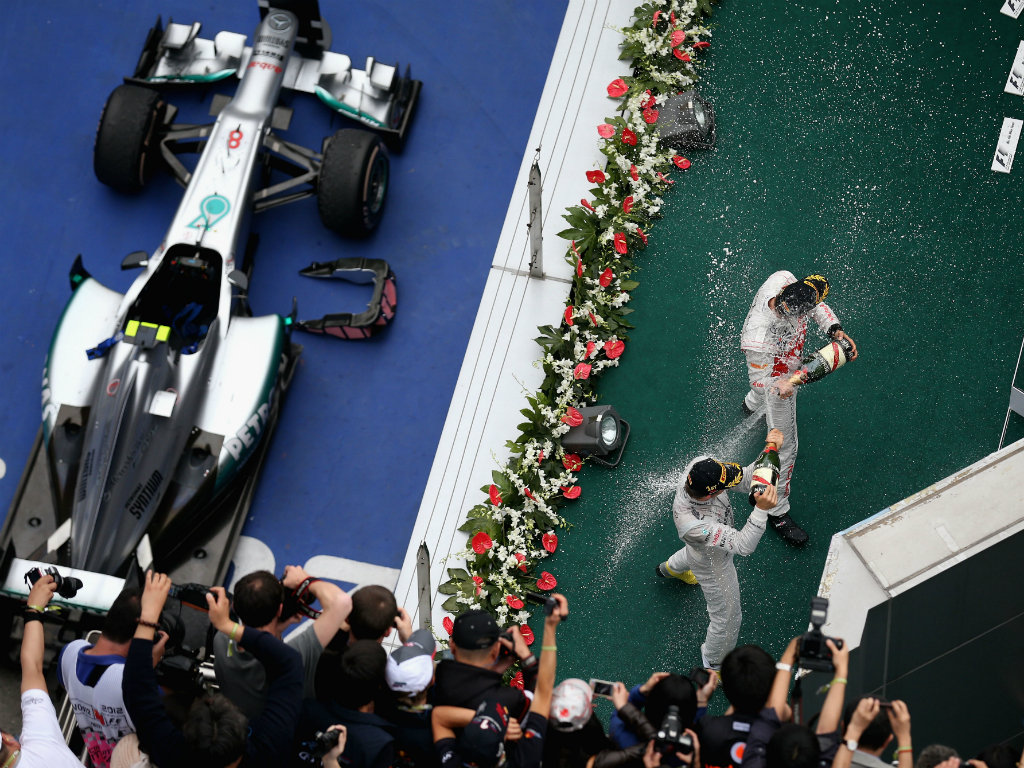 Three different winners, another unexpected twist, 2012 is proving to be the year of the classic…

Three different winners, another unexpected twist, 2012 is proving to be the year of the classic…

Rosberg Finally Gives His Answer
So Britney has finally gone to number one again. Nico Rosberg’s maiden F1 victory in Shanghai – his first in any format since a win in the GP2 series in 2005, the first for a first-time victor in F1 since Mark Webber at the Nurburgring in 2009, and the first for Mercedes since 1955 – wasn’t so much as a long time coming as long overdue. 111 races after his debut, Nico has finally come of age.

All of which made the manner of his win all the more impressive. “Perfectly judged” in the view of Ross Brown, who certainly knows a thing or two about perfectly-judged victories, it was a display which suggests that even though his arrival into the big time has been belated, he could now be here to stay. In the W03 – quickest by half a second on Saturday, quickest when it mattered on Sunday – he certainly possesses the machinery to book a long stay amongst the elite.

Nerveless from the start, still nerveless at the finish, and faultless in the long time inbetween, Rosberg drove like a veteran of victory rather than a virgin. For a driver who immediately cracked under pressure in Australia and Malaysia, it was a remarkable display. And very possibly a breakthrough one.

His challenge now, inevitably, is to sustain this level of performance, starting in Bahrain next weekend in conditions that are not expected to favour Mercedes and the reputedly heat-sensitive W03. That much is obvious; that much is for next week.

What matters at the culmination of this terrific weekend is that Rosberg, at long overdue last, has a trenchant reply to the what-has-he-ever-actually-done question that has hung over him, unanswered, for too many years. Finally, Nico has arrived in a sport he first joined half a decade ago.

F1 Has An Extra Powerhouse
For Mercedes, meanwhile, this was a massive victory. For F1 itself, it was perhaps just as significant. The sport has seen too many cash-rich manufacturers come and ignominiously go in the very recent past – most obviously, Toyota, BMW, and Honda – to have afforded another high-profile casualty to its relentless, finger-burning competitiveness.

For its long-term good, F1 needed Mercedes to make a breakthrough almost as much as Rosberg needed his own. The pinnacle of motorsport needs the biggest names in motorsport and, though there was no suggestion that Mercedes’ commitment was waning just two years after their return to the sport, this weekend’s victory will prevent any awkward questions being asked about what sort of return they are receiving from their massive investment.

Equally welcome is the message sent from a sporting perspective. Mercedes are the third different team to win in a season three races young. They have the pace – although perhaps not the durability – to rip up a pecking order that is already in complete disorder. F1 could not ask for more.

The Pirellis Are The New F1 Critical Ingredient
So much for the notion that F1 needs gimmicks then. No rain, no sign of the safety car, and almost no DRS overtakes and still Shanghai served up a classic. Thank Pirelli, because their rubber is the best thing to happen to F1 since the invention of the wheel.

The entirely-unpredicted twist in a tale that slowburned until its epic culmination was that only Mercedes, the team considered to be the tyre eater in the field, managed to make their rubber last the distance whilst two-stopping, while the close proximity of the field meant that the anticipated DRS-overtaking fest never – literally – came to pass. On the one hand, none of the frontrunners wanted to run the risk of flat-spotting their precious tyres into Turn 14. On the other, with the cars from position two to twelve running in single formation during the closing stages, over half the field was able to run the DRS at the same time, cancelling its effect. Cue the queue.

All the while, it remained a fabulous spectacle and the reward was a finale that saw Kimi Raikkonen fall from second to twelfth in the space of two laps, the World Champion lose three places and his rag, and the three-stoppers finally able to make their pace pay. Strategy is F1’s new best friend.

McLaren Lose Clear Sight
The closest finish that never was? Whether Jenson Button would have been able to thwart Rosberg and deny Mercedes their first win since the fifties is one of those great sporting imponderables which, given the satisfaction delivered by such an epic race, is perhaps best left unpondered. Or at least that might be the view of the hapless – or luckless, depending on the results of McLaren’s forthcoming internal enquiry – crew member whose botch-job undid Button’s grand plan.

According to McLaren’s calculations, a clear stop would have seen Button return to the track three seconds clear of Felipe Massa and then catch Rosberg two laps before the chequered flag. Yet for that calculation to reach prescience, Button would have to claw back twelve seconds in around fifteen laps – a tall order in any race, in any conditions. Perhaps the pressure of pursuit might have seen Rosberg over-extend his rubber and suffer a similar late fate to that of Raikkonen and Vettel, but it’s far preferable to applaud Rosberg for the consistency of his lap-times from start to finish than intimate that a sticky wheel nut was the race’s decisive protagonist.

One of Button’s other post-race observations was especially telling: “As soon as you are in traffic, the tyres start to grain.” What we’ve seen time after time – and very probably meant that Rosberg wouldn’t have fallen back into Button’s clutches even if his stop had been razor-sharp – is that frontrunning track position pays a massive dividend on the Pirellis.

“It is much, much easier when you have clean air and are at the front,” added Lewis Hamilton in a separate conversation. With their compounds the instrumental component in Sunday’s riveting spectacle, now is not the time to utter any degree of criticism of F1’s sole tyre maker, but it is a significant and long-running pity that the Pirellis tend to fall away because of traffic rather than tracktime.

It can’t simply be that, in defiance of everything we have seen so far this year, that the W03 suddenly became a tyre nursemaid in China while the Lotus of Raikkonen, the Red Bull of Vettel and the Ferrari of Felipe Massa all spectacularly unravelled on a near-identical two-stop strategy, can it?

The bad news for Mercedes, then, is that Sunday’s clean-air victory may have been deceptive and their much-alleged tyre weakness may still be a reality. The good news, though, is that any such weakness, if it truly exists, might not matter very much if they can continue to take a front-running lead in qualifying.

The World Champ Suffers Without Power
For Sebastian Vettel, meanwhile, the