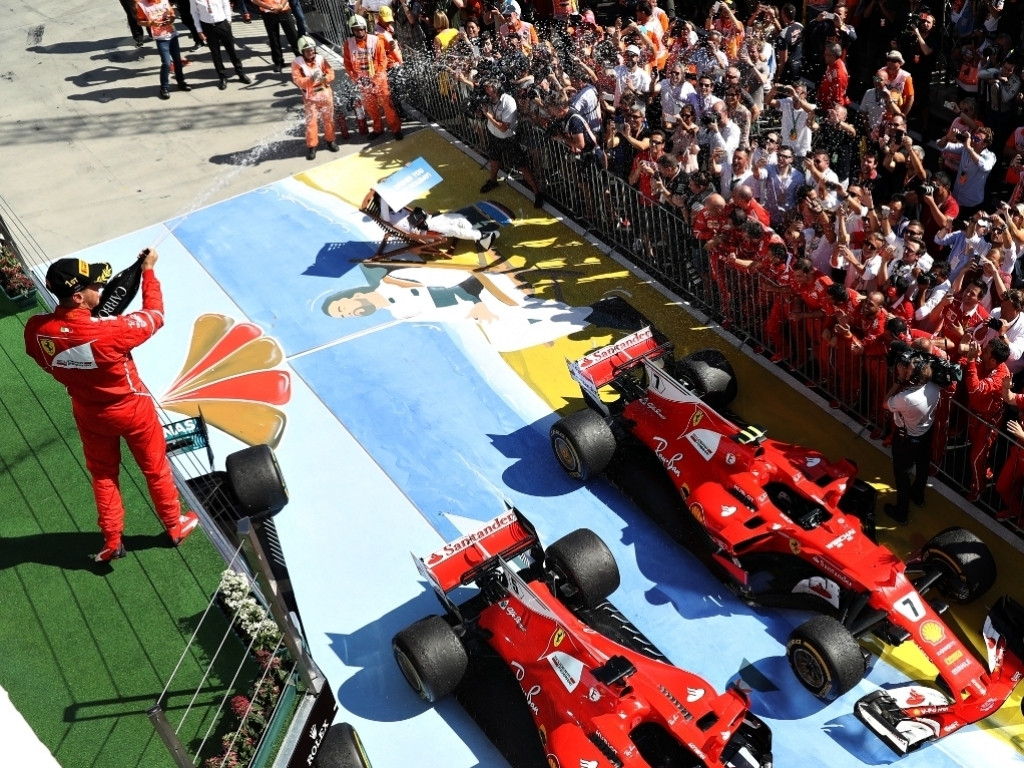 The day belonged to Sebastian Vettel but Red Bull showed in Hungary that they could yet be a threat this season.

The colour is red, but it could be Red Bull next
Kudos to Sebastian Vettel for managing the race from the front and, moreover, managing the problem with his steering to keep a red-hot Kimi Raikkonen at bay. Ferrari’s one-two finish should not be discounted as a key moment of the season and Vettel put in a performance reminiscent of his successful seasons by converting pole into 25 points to again extend his lead in the standings.

But the result does belie the fact that Red Bull are now a genuine threat – on pure pace – to challenge for podiums. Max Verstappen’s side swipe into team-mate Daniel Ricciardo at turn 2 on the opening lap stole from us an opportunity to see just how quick the Red Bulls would be in race trim. Even if the Bulls are unlikely to pose a major threat at Spa and Monza due to the Renault’s (ahem, Tag-Heuer’s) power deficit, they will be credible challengers at downforce-dependent circuits such as Singapore.

As we enter the second half of the season Red Bull could emerge as a genuine influence on the outcome of the title, especially if they maintain their current development trajectory and begin to pinch points off the likes of Lewis Hamilton and Vettel.

Maxed out
Ricciardo said he would be “bleak” if it was indeed Verstappen who understeered into him on lap 1, ending his race before it had really started. Verstappen, it is worth noting, is probably the most aggressive driver in F1, both in defence and attack. Much of his appeal lies in his apparent disdain for reputation with his early career so far defined by no-nonsense battles with both Ferrari drivers and 2016 Champion Nico Rosberg.

“Immature” was the word Ricciardo chose to describe Verstappen’s driving and, although the Australian took a risk by trying to hang-on on the outside of T2, most agree that Verstappen was to blame. That said, Verstappen’s response to the incident was far from immature as he used media interviews and took to Twitter to apologise to both his team-mate and the team.

The youngster still has a lot to learn but he is learning, which will only make him a stronger contender if, or when, he finds himself in a car capable of regularly taking wins.

F1 gets feisty
Before travelling to Budapest it was obvious that many relationships in the paddock have been straining. The Toro Rosso drivers aren’t the best of friends because of a couple of incidents in recent months, while there is also an obvious split in the Sauber garage. Nico Hulkenberg and Kevin Magnussen aren’t likely to grab a friendly beer after the visit to Budapest, either.

Hulkenberg took umbrage with Magnussen’s tough defending, which forced the German wide at T2, and approached the Haas driver after the race. In one of the more memorable lines in recent F1 history, Magnussen told Hulkenberg to “suck my balls”.

It might be a throwaway jibe more at home in a South Park episode; yet the entertainment value is inarguable, even if Magnussen’s language is on the unbecoming end of the spectrum. Fans, however, want to see more personality after many years in which drivers have tended to act like robots (sidenote: Raikkonen certainly sounds like one). There is also some irony that Mercedes, the team that has suffered the most from poor driver relations in the turbo era, is currently an idyllic place of calm, peace, happiness…and positional swaps. Will they come to rue that by the time we reach Abu Dhabi?

But two factors blight the show
Magnussen’s team boss Guenther Steiner defended his driver and criticised Hulkenberg for ruining Romain Grosjean’s race in a first-corner clash. Yet Magnussen received a 5-second penalty, while Carlos Sainz did not despite being investigated for a similarly robust move on Fernando Alonso after the safety car restart.

With Verstappen’s 10-second penalty for hitting Ricciardo is factored in, it becomes clear that the officiating lacks consistency, especially when we consider that the stewards have said they will be more lenient on lap 1 when the cars are close and battling for position. Changing the composition of the team adjudicating these decisions is one possible step towards greater consistency. Regardless, it’s pointless speculating about possible solutions if the sport doesn’t acknowledge that the stewarding is a problem.

At the same time the race in Hungary highlighted how difficult it is for drivers to follow cars in dirty air. Even if the Hungaroring is known as “Monaco without the walls”, F1’s leadership needs to review the aerodynamic regulations to find a middle ground between aero innovation and aero that allows for close racing.

The holidays are here
McLaren and Alonso finished best of the rest with a strong sixth. It is a testament to both how far McLaren have fallen – and how wasted Alonso’s talents have been at Woking – that sixth is viewed as a success. Indeed, it is an indictment on both parties’ inability to make the most of their resources and talents respectively.

If Magnussen’s one liner to Hulk is the line of the season so far, Alonso lounging on his deck chair underneath the podium in Hungary might be the gimmick of the year. Designed for entertainment value, the image immediately reached viral meme levels on F1 forums.

Alonso should (probably) be applauded for being game to do a stunt of this nature. The sad truth is, however, that the two-time Champ has become a parody of himself. And as Martin Brundle noted on social media, Alonso should be on the podium. He is too good not to be.