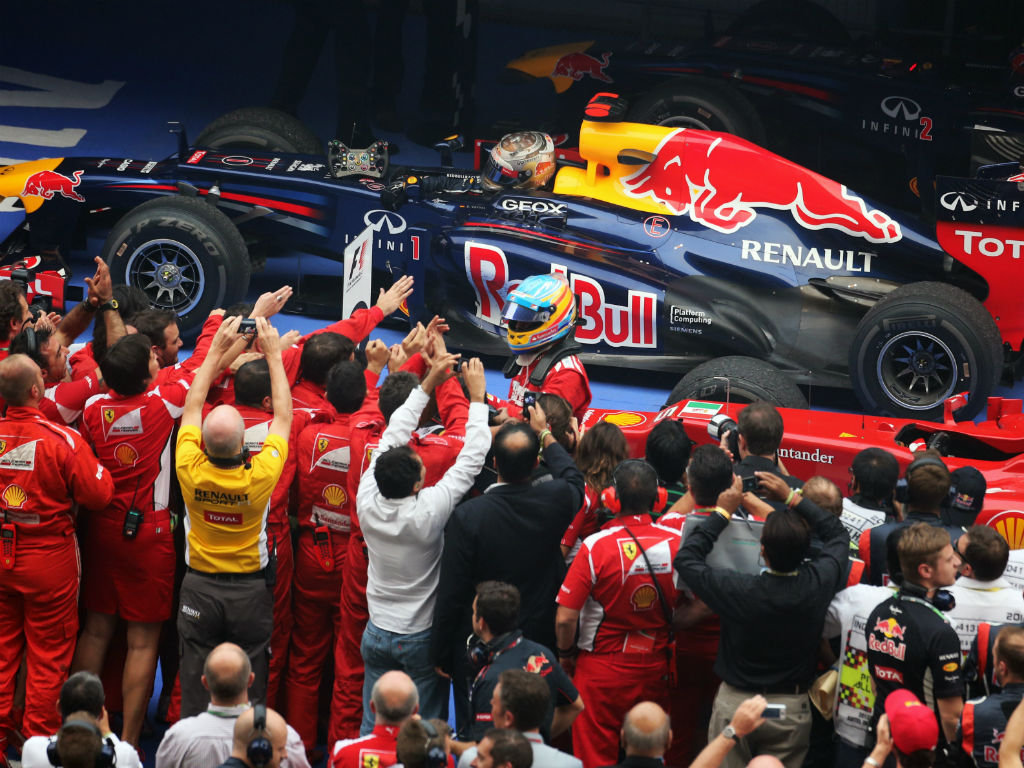 Alonso’s problem is his brilliance – and the challenge of trying to beat F1’s systematic winner
Fernando Alonso won’t require a second career when his extremely lucrative time as an F1 driver reaches its retirement age. But, if he did, then a long and inspirational sideline in motivational speaking would surely await.

As a team leader, his status in the sport is unsurpassed and although his maths didn’t add up on Sunday night when he argued that, despite falling further behind in the World Championship, his hopes of beating Sebastian Vettel to a third title had actually improved in defeat, it was impossible not to admire his defiance or appreciate his bloody-mindedness. He is a phenomenon.

The thought flickers, though, that perhaps Alonso is too great an inspiration, the strength of his personality so convincing and powerful that Ferrari have been lulled into thinking that his genius will be sufficient to beat Red Bull and Vettel. For the first fifteen or so races this season, it was. But as Fernando, in a rare moment of apparent irresolution, mused on Saturday night, it isn’t just – or even perhaps mainly – Vettel who he is striving to overcome.

Alas for Fernando, he isn’t fighting one man, but two, and his foremost foe is another genius who also happens to be the most successful protagonist in the sport, a serial winner with three different teams over the last two decades. Vettel, like all drivers, is beatable, but Adrian Newey, the closest thing to a guarantee of victory in F1, is a different matter altogether.

“At the moment we are not fighting against Sebastian only,” lamented Fernando. “We are also fighting against Newey.” In the wake of Vettel’s fourth successive victory, Hamilton was even more effusive – but not about the driver who had just become the first to lead every lap of three successive races since Ayrton Senna in 1989.

“Adrian is just a genius,” the McLaren driver told reporters. “I can’t even imagine what Adrian and his team are doing. He’s a one-off.” And a one-man winning machine.

While the most successful driver in the sport has ‘only’ won seven titles, to Newey that haul is small fry – and it’s getting smaller. With Vettel only marginally extending his advantage over Alonso this weekend to thirteen points, Sunday’s most significant surge was in the Constructors’ Championship. 91 points ahead of Ferrari, it is now a given that Red Bull will win a third successive team title and, through his deliberate and brilliant design, Newey has created his ninth title-winning car. Ninth.

He is the first among equals as the one man in F1 without peer.

Vettel has a skill up front that perhaps even Alonso and Hamilton couldn’t better
Mark Webber is a very handy F1 driver. So, too, is Felipe Massa. And there’s no doubt that Jenson Button is. Between them, they have won one World Championship, held another for half a lap, and almost claimed another outright two years ago. But when the chequered flag fell this Sunday, Button was twelve seconds behind his team-mate, Webber thirteen, and, somewhere further afield, Massa over half a minute adrift.

The cream has risen to the top, and while Alonso and Hamilton’s quality is generally considered to be beyond dispute, the early stages of Sunday’s race witnessed a devastating reposte to critics who prefer to disparage Vettel as a lucky driver. Forget that. First and foremost, he’s a very fast driver.

After the first lap, his lead over Webber, driving a problem-free car at that stage and in clean air, was 1.2 seconds. After the second, it was 1.6. After four, it was 1.9. After eight, it was 2.6. After sixteen, 4.1. And so on, and so on until Vettel went into cruise control. Webber is not slow – he wasn’t even off form this weekend; it’s just that Sebastian is very, very quick.

Allied to wonderful car management and an eerie ability to blank out any other distractions to focus purely on the task of winning, Vettel has become the number one frontrunner of his age. True enough, he may lack the raw pace of Hamilton or the all-round skills of Alonso, but as a leader of the pack he is unsurpassed. It’s a talent borne of his environment – he’s driven a frontrunning car more often than not in his 98-grand prix career, and he understands better than any other driver in the field that the most efficient way of managing tyres in a race is to be quickest the day before.

Until he takes on Alonso or Hamilton in identical machinery, or wins in a car that isn’t the fastest in the field, his claims to be regarded as a true legend – the title of a great, however, will have to be conferred with his third title – will always be suffixed with an asterisk. But what of the flip-side? It’s been a long, long time since Alonso drove a frontrunning car, and even in 2008 Hamilton didn’t possess the sort of mechanical advantage that Vettel has mostly had for the last three years. For all the sniping, how much do they really know of what is Vettel is currently doing or capable of?

The point to be made is that while Hamilton and Alonso are wonderfully superior over their team-mates in their own current environments, it doesn’t necessarily follow that they would either be beating Webber so resoundingly or making winning appear so effortless. In this particular type of frontrunning car, Vettel may be a class apart – and the stuff of champion alright.

Hamilton appears with a necessary new look
Appearances can be deceptive and it’s always easy to see what you want to see, but for the first time the wisdom of Lewis Hamilton’s decision to depart for Mercedes began to look feasible this weekend.

From the sight of Hamilton wandering up and down the pitlane on Friday morning to take a close look at the competition’s cars – something he continued to do in parc ferme after qualifying – even before he had trundled out on track, to Lewis’ wonderfully-committed pursuit of the Red Bulls on Saturday and Sunday in a car that had been far off the pace on Friday, he had the look and feel of a driver who is ready to become a team builder and not just a very fast driver.

The process will be a long one, however, and the assumption must be that Mercedes have already given up on 2012 to turn all of their attentions to 2013. Judging by their metaphorical and literal pointless weekend in India, Hamilton must hope so. Otherwise he is driving his career up the sort of dead end that Michael Schumacher is being forced to finish his time in the sport stuck in.

Talk of Sebastian Vettel moving to Ferrari has been muted by both his insistence that stories of a pre-contract agreement are ‘bulls**t’ and Helmut Marko’s assurance that his contract, previously believed to contain a results-based opt-out clause, is “bullet-proof”. But if there’s one question to be