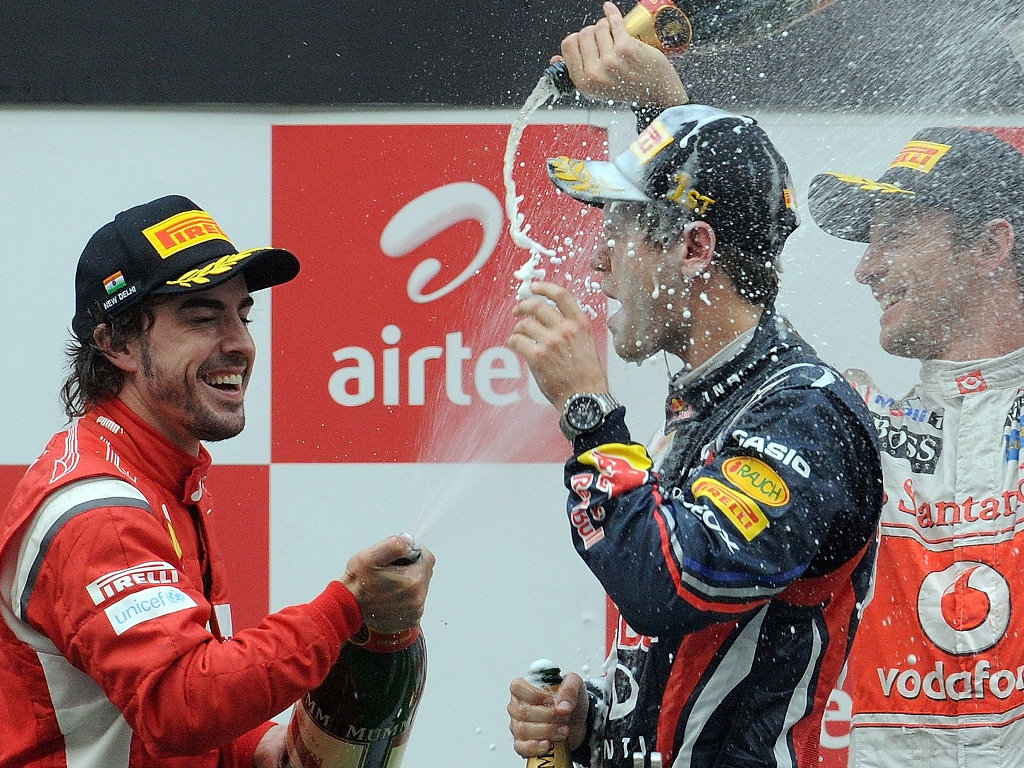 India probably shouldn’t be in F1 yet, but F1 should be applauded for going there…

India probably shouldn’t be in F1 yet, but F1 should be applauded for going there…

BLINK AND YOU’LL MISS F1’S HISTORY MAKER
And somewhere out in front, Sebastian Vettel won another race. The World Champion has become a man of mystery, invincible and invisible in equal measure. His total air time over the 60 laps this weekend must have been less than 60 seconds. Blink and you’ll miss F1’s record-breaker (he has now lead more races in a single season than any driver in history). It’s an interesting trick we’re being invited to view: the leading man made peripheral by television producers determined to broadcast a race almost entirely divorced from its frontrunner.

Far from being affronted by his disappearing act, Vettel should be flattered because being depicted as boring is the ultimate compliment a Champion can be paid. He has succeeded in making F1 processional to the extent that the only response available to those tasked with casting F1 in a positive light is to hide him from view. He has been too good for his alleged competition, and too good for the viewing public who have tuned in for entertainment and spectacular spectacle rather than an understated masterclass in frontrunning. Without him, this season would have been a vintage affair. With him, it’s been a record-breaking procession, accomplished with the absolute minimum of fuss.

Vettel’s trick this year has been to make F1 look easy and this weekend’s victory was picture perfect from first to very last – having started out on pole, he led each lap and reeled off the fastest lap of the race on his final tour just for the lark. He’s in a different race to the rest of them.

It’s the ultimate party-piece for any F1 driver to achieve and yet, as we’re not seeing, it doesn’t make for great television.

HAMILTON AND MASSA HAVE TO END THIS
And then there was the other repeat that we were invited to watch ad infinitum. Felipe v Lewis has become the clash of F1 but, like an old joke turned vindictive, it’s not funny anymore.

Having mourned the passing of Dan Wheldon and Marco Simoncelli before the race start, there was something extraordinarily crass about what followed in such familiar fashion. The stewards were quite correct in the punishment they meted out, with Massa leaving the door open only to slam it shut with little or no care for the consequences, and the only argument is whether the matter should be put to rest with a drive-through. It shouldn’t be because it’s high time that the pair were called in for a final warning.

On this occasion, Massa looked to blame because he looked for Hamilton’s whereabouts before plunging his Ferrari into his rival’s McLaren. Only Massa can truly know what he saw and it may be the case that the Brazilian was still blind to Hamilton’s position. Appearances can be deceptive and all that.

Yet the wider concern is that this ongoing spat has all the soundbites and hallmarks of a feud that will only end with something terrible. Massa v Hamilton has become dangerous and, regardless of where the blame lies, another reunion should result in the pair of them being black-flagged.

F1 can have no place for a personal grudge; not now, not ever.

F1 HAS BECOME THE WORLD’S GLOBABL SPORT
The journey isn’t over yet but, fresh from discovering a new port in which to take sanctuary from the global financial storm, F1 finds itself in a new place altogether. In the space of little over ten years, F1 has travelled far beyond the familiar comforting confines of Europe to become the pioneering sport of our globe.

It’s not been an easy ride and culture clashes have been inevitable along the way. They still are. This week, when F1, in the business of gleaming excess, paid its first visit to a country of despicably deep-rooted poverty the contrast was too stark to be anything other than crass. We can debate whether India ought yet to be hosting a grand prix until we are all blue in the face, but F1 itself ought to be applauded for venturing so far out of its natural habitat to continue its expansion into a truly global sport. F1, for all its faults and anachronisms, has embraced globalisation like nothing else in the sporting sphere.

With another brick in the wall laid this weekend – India is the third of the four Bric nations on the calendar, with the fourth, Russia, due to follow in a couple of years to complete the set alongside Brazil and China – only Africa now remains conspicuously absent from the schedule. But for the long-talked-about-but-never-quite-fulfilled dream of returning to Cape Town or advancing into one of the deserts in Africa’s north, F1 otherwise traverses all corners of the globe.

And it hasn’t stopped growing up in new places.

This year, India. Last year, Korea. Next year, back to America for the first time in almost a decade. And the year after that, somewhere new again on the east coast in the attractive shadow of the New York skyline. Soon after that, Moscow. And then who knows where. South Africa, hopefully. North Africa, maybe.

It’s an expansion all the more remarkable for F1’s previous reticence to move. In the entirety of the 1980s, the sport was introduced to just three new bases, all of which were in Europe.

Twenty years ago, F1 had 16 destinations, of which ten were European, three in North America and the final couple perfunctory trips to Japan and Australia. In the ten years that followed, alterations remained few and far between. Mexico lost out to the deceptively-titled Pacific GP, Argentina came and went, South Africa popped in and then out, but F1 more or less stayed where it was. And in comparison to the 1991 schedule, the only difference for 2001 was the addition of Malaysian at the expense of Mexico, the replacement of Portugal with Austria and the imposition of a second German GP under a European title.

Now look at it.

Since 2001, F1 has put the Nurburgring on rotation with Hockenhein and abandoned San Marino, France and Austria. Into the void: Bahrain, Abu Dhabi, Korea, China, India and, as of next November, a new home in the United States. F1 has made the world its oyster.

Too much, too quick? Maybe, because there is an argument that the spate of newcomings means that debuts are now suffering from diminishing returns. Uniqueness has become regular and the novelty factor of being treated to a new grand prix has been worn down into old hat. It’s another remarkable feature of F1’s dramatic new look that, of the twenty grands prix scheduled for 2012, almost half hadn’t appeared on the calendar before 1999.

Better to move on than stand still, however. F1 has travelled with the times and broadened its horizons. There is a danger that in vacating its traditional bases, F1 will disenfranchise its former life-blood and deep-rooted motorsports fans will squeezed to the periphery at the expense of commercialism. Alas, it’s the way of the world.