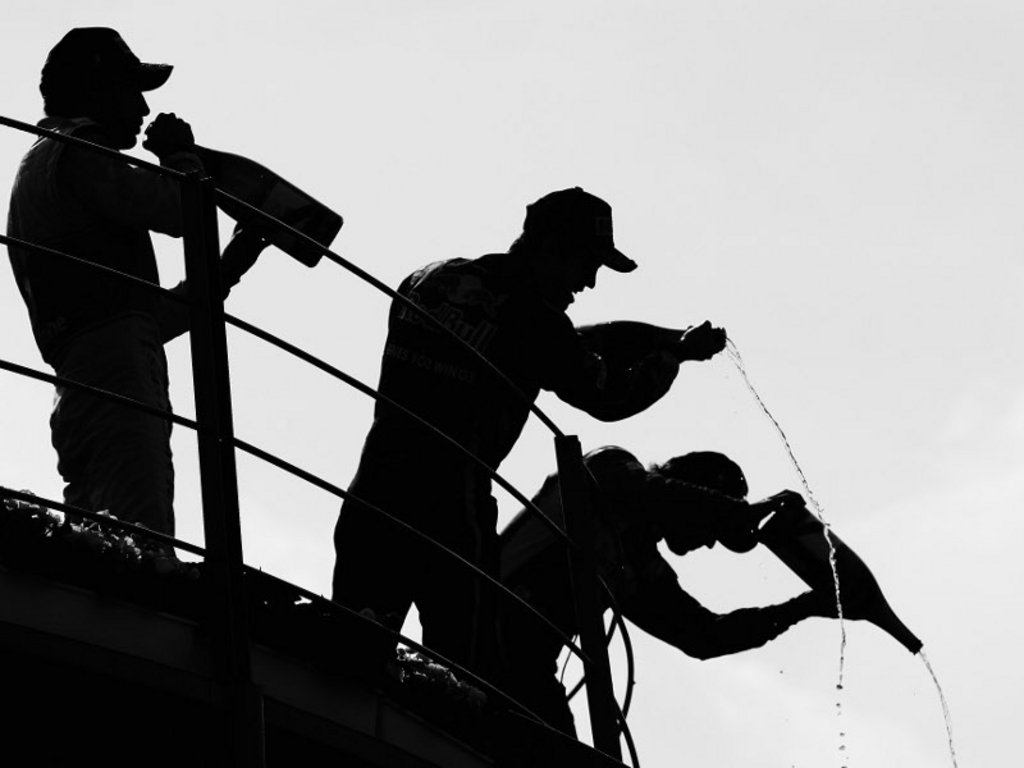 Vettel turns the criticism into dust…

Vettel Ends A Great Doubt
It’s an illustration of just how dominant Sebastian Vettel was around Monza this Sunday that he was scarcely given more than a full minute of air time. The race was on but only if the race director continued to count him out as the inevitable winner from the moment he passed Fernando Alonso. And what a moment it was.

Though Jenson Button ranked his own move on Michael Schumacher as the bravest of his career, it lacked the aesthetic, heart-stopping drama of Vettel skating off the circuit into a puff of dust in order to find just enough room to pass the Ferrari before reaching the chicane with a second World title all but confirmed. Pass the baton: if results go his way in Singapore, Vettel will eclipse the Spaniard as the youngest two-time Champion in the sport’s history.

Now is not yet the moment to wonder where Vettel will ultimately rank in the record books and pantheon of greats, but this was the weekend when he proved beyond doubt that he is a racer as well as a winner.

Quite literally, the accusation he cannot overtake has been turned to dust.

More Or Less From The Monza
There are two Italian GPs. There’s the one we hear about and the one we see; the one for awed attendees and the one for an anxious audience. One is a classic, an essential event, punching passion in glorious late-summer sunshine. The other is a fleeting procession, a race short of time and climax. It hosts in fine fettle, but shows up without finesse.

Think Monza, think flat-out tidal wave of power in front of a sea of red. The action is almost all about the atmosphere. Vettel’s stunner around Alonso will live long in the memory but the annual frustration at the end of the Italian GP is that it always ends so quickly. Even with the deployment of the Safety Car, Sunday’s race lasted scarcely an hour and twenty minutes. To put that in context, without a mention of the Canadian GP, the BBC’s combined pre- and post-race frontline previewing and reviewing ran to almost twice as long as the actual thing. Those in three-day party residence at Monza this weekend will hardly have noticed the shortfall, but Italy’s main event needs to man up with at least another ten laps for the rest of us.

Questions For Whiting
So for once it wasn’t Lewis. And for once the stewards weren’t interested either.

Having vented his frustration at the interference of the stewards all season long, Hamilton’s frustration this weekend was the absence of interference from the stewards after Michael Schumacher blocked his progress with a blatant double weave. He might have kept quiet after the race, but the publication – both on air and on the McLaren website – of his protest “I thought you could only move once” had already supplied his salient testimony on the matter.

As the McLaren driver was handed a 20-second time penalty at Malaysia as punishment for a far-less obtrusive double-block against Fernando Alonso, Schumacher’s lenient let-off reeked of a hypocrisy. Yet the first layer to be slapped on to any discussion of the incident has to be the reminder that Hamilton’s severe punishment was meted out because he had been warned for weaving in front of Vitaly Petrov at the same circuit a year previously. He was made to suffer for being a repeat offender. Schumacher, at least officially, had no such black mark on his record.

However, he does have form for the “deliberate crowding of a car beyond the edge of the track”, to quote Article 20.2 of sporting regulations. Just ask Rubens Barrichello. If the stewards felt that Hamilton’s rather optimistic move up the inside of Curva Grande deserved a block of reality, the sight of the McLaren being forced on to the grass should at least have been factored into their considerations when reviewing the Mercedes’ double block four laps later. If, that is, they did review it at all.

Presumably, the Grand Prix Drivers’ Association will be seeking clarification of the precise judicial process at play this weekend in Monza because it was only a little over a year ago, in the wake of Hamilton’s weave in front of Petrov, that a meeting of the GPDA was convened to discuss the issue and ended, according to a report of the time, with the ‘recommendation to the FIA’s race director Charlie Whiting that they wanted to see future miscreants given a drive-through penalty.’

Recommendation rejected? Apparently so. According to Ross Brawn, his veiled warning to Schumacher was made on the specific request of the FIA race director who must have felt therefore that: a) the Mercedes driver had pushed beyond the boundaries of fair racing and, b) indirect verbal intervention would suffice as official response. Curious. So did Hamilton and McLaren’s complaint against Schumacher even reach the stewards’ office? Now there’s something to talk about.

Still, the final word must be that at least Hamilton-Schumacher provided the Italian GP with a compelling talking point. Without their duel – their first of note since the old boy’s return – the race would have been devoid of drama long before the halfway stage.

This column doesn’t really believe as much, but in the interests of balance we’ll type it out anyhow: If Liuzzi was condemned for driving on to the grass, then his misdeed surely ought to have been alleviated by the fact that Alonso used precisely the same extension of road to beat Vettel and Hamilton into the first corner.

Ferrari And McLaren Still Lack A Winning Formula
For McLaren and Ferrari, the bested behemoths of Formula One, the season cannot end soon enough. There’s spin and bluster, defiant rallying cries, but fresh insult has been added to injury in recent weeks with Red Bull romping to victories at the two circuits where they were predicted to struggle. You’d think that, after two-and-a-half years of convincing superiority from Red Bull, they would no longer be under-estimated, but apparently not. These raging Bulls seem to have an answer for everything.

For McLaren, the frustration of the last two weeks has been particularly acute due to their refusal to switch the focus of their resources towards the development of next year’s car. Even when still utterly dedicated to a lost cause of a season, they cannot win. That’s gotta hurt. And their failure to win, coupled with a refusal to change priority which even Martin Whitmarsh has accepted could be considered a “weakness”, is bound to hurt their hopes of overhauling Red Bull next season. Tis far easier to evolve a winning car into another winner than successfully revolutionize an