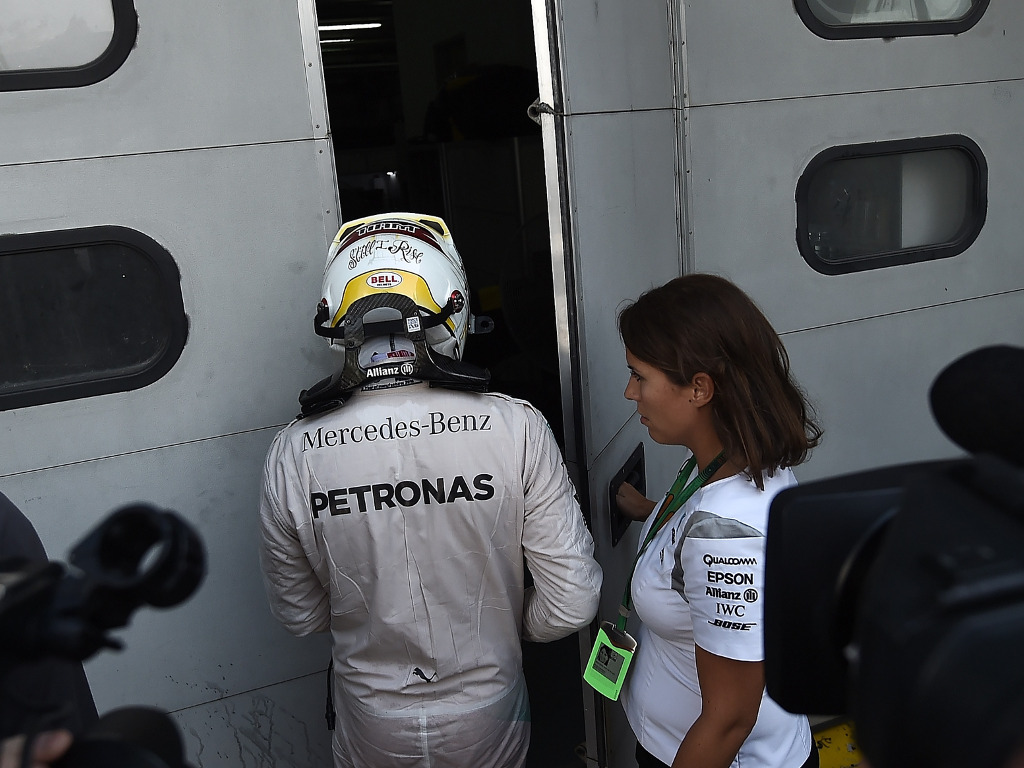 The heat is on Hamilton
The track temperature was well over 50C. For all the haze and humidity, the only heat will be remembered about Malaysia 2016 are the flames that spat out of the back of Lewis Hamilton’s Mercedes W07. The power unit failure at Sepang could be the defining moment of the season and Hamilton, crestfallen with head in helmet trackside, could be the defining image of a campaign to remember.

Because now, with just five races to go, Hamilton finds himself 23 points adrift of Nico Rosberg who finished third in Malaysia. Moreover, Hamilton may face a grid penalty due to a parts change that the failure is likely to prompt.

What a difference 40 laps makes. Going through T1 at the the start Rosberg was at the back of the pack after contact with Sebastian Vettel left him facing backwards, while Hamilton was flying out front. Not to mention Rosberg’s high risk, low reward lunge up the inside of Kimi Raikkonen on lap 38.

For the Championship leader, 2016 is just working out and with this in mind his third place is effectively a victory.

When misfortune reads like conspiracy
Hamilton’s post-race suggestion that “something just doesn’t feel right” about his reliability woes lit up social media platforms as fans buzzed about a potential conspiracy.

But context and perspective are everything. This is, it is also worth noting, a driver who hasn’t tasted victory since the German Grand Prix in July. He is hurting as a reliability-related DNF will never feel just.

Is it possible that some of the 700 Mercedes F1 employees could sabotage a car? Yes. Is it possible for them to keep quiet about it. No.

Hamilton would be better off pondering how best to revive his challenge by doing his talking in the cockpit at the next grand prix. Or by partying it up with the Kardashians or whatever it is he does for race preparation these days.

Red Bull builds momentum and Ricciardo lays down a marker
Besides Hamilton’s DNF, the moment that settled the 2016 Malaysian Grand Prix came on lap 39. To be accurate, though, it was not one moment but a sequence of punches and counter-punches that the Red Bull duo exchanged through turns 1 and 8.

Daniel Ricciardo refused to yield in the face of Max Verstappen’s onslaught, which earned the Australian track position when the virtual safety car was deployed on lap 41.

As this column has noted before, Ricciardo is the form man in F1 right now. In the last five races he has outscored Hamilton 89 points to 73 (to Rosberg’s 102). Yet considering the W07 superiority over the RB12, Ricciardo’s performances continue to stand out.

Ricciardo should have won in Monaco and was aggrieved to lose out to his team-mate in Spain, but now the scores are level at one win apiece. Perhaps Ricciardo did indeed settle a score at Sepang, but more crucially he also marked his territory as both Red Bull #1 and the man next in line to win a title.

How does Verstappen feel about this? While there was no repeat of multi-21 today, what today’s race highlighted is that it may not be far off. Verstappen won’t back down and neither will Ricciardo.

“Sebastian is crazy”
These were the words uttered by Verstappen on lap 1 after Vettel’s attempt to get out in front of the Red Bull. Instead the four-time Champion ended up out of the race after the contact with Rosberg broke his Ferrari’s front suspension.

Malaysia, therefore, was yet another race of ‘what if’ for the Scuderia. What if Vettel had got past Verstappen? Could he have challenged Mercedes, or would Ferrari’s strategy failed again? These counter-factuals are an enjoyable exercise for fans and pundits alike, yet they only serve to underscore how inadequate Ferrari have been this season.

And as bad as Ferrari’s strategy has been, shades of the 2014 Vettel have emerged. The German has had a ragged and scruffy season by his standards and again finds himself behind his team-mate in the standings.

Groanjean tries to keep it together
Romain Grosjean and Haas have had a couple of highs, especially early in the season, and many more lows as the campaign has progressed.

After failing to start in Singapore, Grosjean’s Malaysian Grand Prix ended prematurely after a brake failure left him beached in the gravel.

Grosjean cut a phlegmatic figure following his DNF, saying that Haas would inevitably have teething troubles in their debut year.

Now 30, the former Lotus man knows that the clock is ticking on his career and more than helping Haas in the medium or long term, he wants to put himself in the shop window.

But no one buys goods that make it neither to the grid nor the finish line.

Still well adrift of the top three, Malaysia’s result is a microcosm of where McLaren stand in relation to rivals such as Williams and Force India.

There is more to come from Honda, no doubt, and Stoffel Vandoorne’s elevation into the first team will push Alonso in much the same way that Verstappen has pushed Ricciardo. It is too early to call it a resurgence, but the pack will no doubt need to keep an eye on what comes out of Woking this winter.

A point scored, but too late to prove a point
After binning it in Hungary, Jolyon Palmer finally came good and bagged his first ever Championship point in F1 with a tenth-place finish at Sepang.

It seems the young Brit will have five more opportunities to score points as all indications are that both he and his team-mate will be sniffing around for regular races in Formula E in 2017.