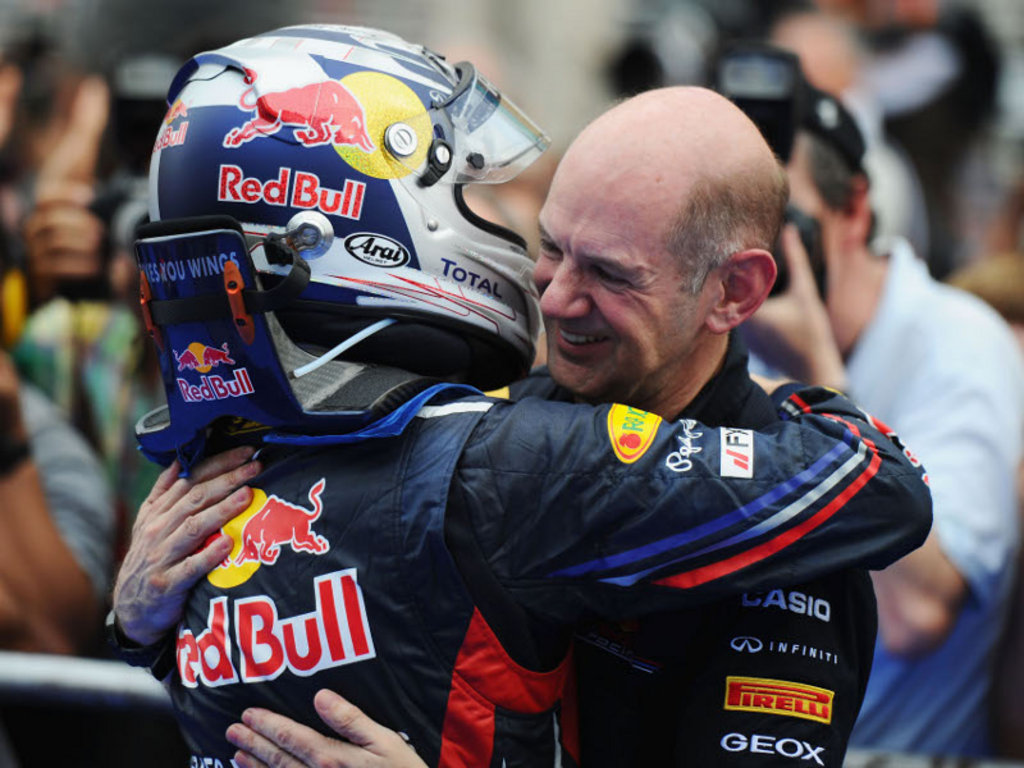 Sebastian is in F1’s danger of becoming the new Schumi…

Sebastian is in F1’s danger of becoming the new Schumi…

F1 Is A Cruise For Vettel
Much more of this and Sebastian will become too much of a good thing for F1. His victories are already verging on being routine; Sunday’s was his fifth in six races – and but for an engine blow-out when leading in Korea, the German would have registered a clean sweep over a period that amounts to one third of an entire campaign. The reigning World Champion is dominating the sport in a manner not seen since Michael Schumacher was in his exclusive pomp.

For now at least, Vettel still retains a novelty factor and his victories have not yet dulled the spectacle. His win three races ago in Abu Dhabi was a thriller in the widest scheme of things because it resulted in the youngster winning the World Championship having started the day third in the standings. But the frustration remains that Vettel’s victories are invariably so one dimensional: with the exception of Brazil, when Niko Hulkenburg was overtaken after two corners, each of those five wins have been of the flags-to-light straightforward variety. It’s his one and only modus operandi. Indeed, but for Hulkenburg’s fluke and very shortlived P1, this weekend in Malaysia would have marked the first anniversary of Vettel’s last grand prix victory from a starting position anywhere other than pole – and even then, he led after the first corner. In the entirety of his F1 career, all but three of his race victories have been won from pole position.

His victory in Malaysia amounted to another cruise – a wonderfully fast, faultless cruise, but a cruise nonetheless – and the frustration lingers that Vettel is not being adequately challenged or fully tested. It’s all far, far too easy and, three years after his emergence as a major player in the sport, Vettel remains an unknown quantity both as an overtaker and in defence. He might not appreciate the notion, but he’d be better off – at least in terms of reputation and credibility – if Ferrari and McLaren catch and occasionally pass the Red Bulls because until he impresses in nose-to-nose combat (and his racecraft has generally underwhelmed whenever he has been challenged), he will never be regarded as one of the sport’s greats.

The Bulls Don’t Have A KERS In The World
But they will in China, when a reliable KERS unit will be essential for the longest straight on the 2011 calendar. Its failure in Malaysia cost Mark Webber at least one place, maybe two, and Vettel himself would have been vulnerable to a late charge from Jenson Button but for McLaren urging caution from their tyred driver.

With such little time between races, it will be a tall order for Red Bull to right their only appreciable wrong next weekend. Adrian Newey’s disdain for artificial gizmos – double diffusers, f-ducts, KERS and so forth – befits his status as a genius of aerodynamics, but his apparent failure to leave ample space for the unit in the design of the tightly-packed Red Bull is the solitary wing-clipping weakness offering a glimmer of hope to the team’s rivals.

A Self-Induced Disaster For McLaren’s Lewis Hamilton
But was the inducement the doing of Hamilton or McLaren? The minor mistake made on Hamilton’s final qualifying run, allowing Vettel to sneak into pole by a tenth of a second, became a major matter at the start of the race when his McLaren was swamped by Button’s and Nick Heidfeld’s fast-starting Renault and Hamilton did well just to cling on to third without a collision. Had he led off the line with Vettel required to fend off the swarm – an experience he remains wholly inexperienced at – then Hamilton might well have raced off to a comfortable victory. The McLaren certainly had the pace on the option tyres for an extended stay out in front.

The puzzle was why Hamilton then had two stints on the hard tyres that clearly did not suit him and why he twice pitted for fresh rubber when his current set had not yet run its full course. They had hit a mole hill, not the ‘cliff’ that has entered F1’s vernacular along with Pirrelli.

The upshot, compounded by a tardy third stop, was a race that unravelled spectacularly, culminating in a fourth and costly stop precisely because the team had asked too much of his rubber. “We pitted too early, then we had to pit earlier, all the time we were pitting before everyone and my tyres were just finished at the end,” he lamented with understandable irritation. Not for the first time, McLaren’s strategy left a lot to be desired.

Button also registered his “confusion” at events, but in comparison to his team-mate’s race the 2009 World Champion’s outing was straightforward if back to front: whereas Hamilton excelled on the soft tyres and then struggled badly on the primes, Button endured the softs and enjoyed the primes. A reflection, perhaps, on their differing styles – though, as noted throughout the weekend, Hamilton has become a far smoother driver – and also the learning curve McLaren are currently on with a car that is effectively two weeks old. Having gone in the wrong direction on set-up at the start of the weekend, Button’s remark that it “just came alive” on his final stint in Sunday’s race served as a mitigating admission that the team are still yet to fully understand their latest creation. If Vettel and Red Bull are to be overhauled, however, they need to learn quickly.

Just For Starters, Hamilton’s Penalty Reeks Of Double Standards
No doubt Hamilton will also have a struggle to understand precisely why the stewards singled him out for retrospective penalty for allegedly making more than one move when defending against Fernando Alonso given that Vettel made three separate distinct moves to block the McLaren off the line into the first corner.

It may be the case that the stewards took the reprimand given to Hamilton last year when he tried to break the tow to Vitaly Petrov into account when imposing his 20-second penalty, but the absence of any sort of reprimand, let alone a tangible punishment, against Vettel two weeks after he was permitted to leave the race track to pass the already-penalised Jenson Button reeks of a double whammy of double standards.

A Rare Good Day For The Number Twos
So much for the post-Australia theory that the number ones were going to race away with it. Not only did Button beat Hamilton, but Massa finished ahead of Alonso for the first time since September, and Webber did a very decent job to finish just behind Nick Heidfeld in fourth. These in-house battles could yet prove in the bigger World Championship picture because it’s a fair bet that, if the contest does become a three-way battle between Alonso, Hamilton and Vettel, it will be the driver who loses the least amount of points to his team-mate who will prevail.

Loving Brundle, But…
It’s early days, but Martin Brundle has been a revelation as the lead