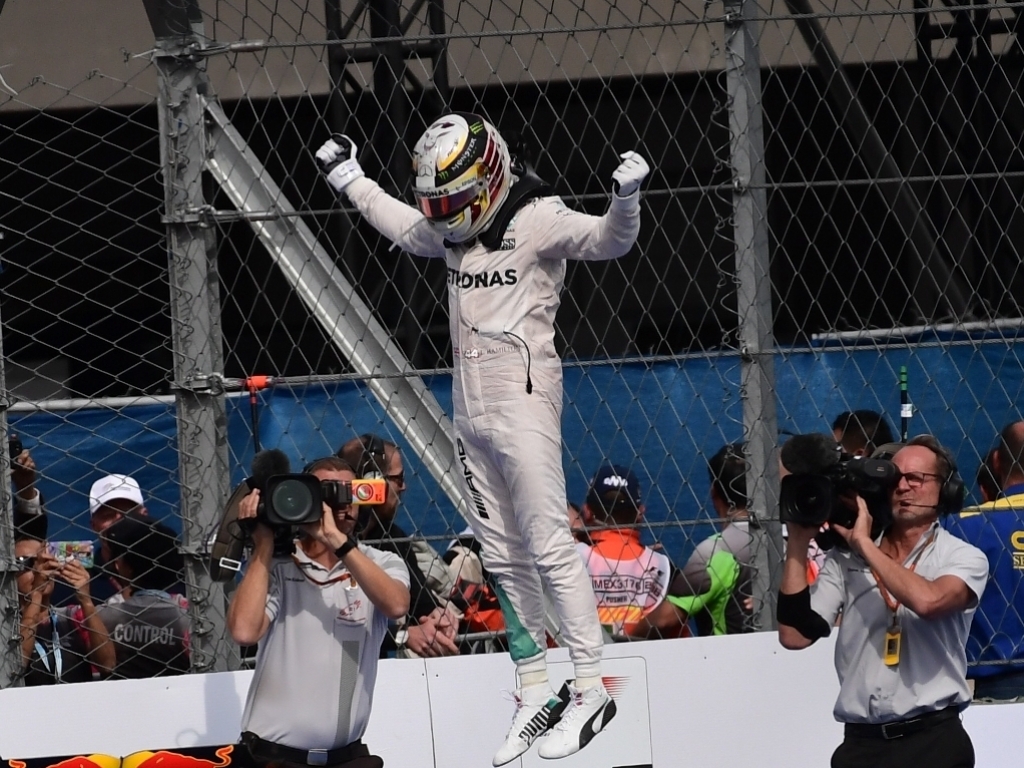 Coronation awaits
The narrative at both the Mexican and US Grands Prix have felt a bit like the fable of the hare and the tortoise. While Hamilton as the former scampers to victory, steady Nico plays the percentages with the Championship in mind.

However, likening the man who has won half of this season’s races to a tortoise is unfair.  A closer look at the start of Sunday’s race also shows that Rosberg is willing to bang wheels if necessary. He came out of the opening-lap tangle with Max Verstappen unscathed, but for a man playing the long game it was a major scare.

Doubts remain about Rosberg’s wheel-to-wheel racing ability, though full credit to the German for finishing second after fending off the Red Bull on the opening lap and again later in the race.

Victory at Interlagos – no matter Hamilton’s result – will ensure Rosberg wins the title. Unless, of course, Brazil becomes to Rosberg what it did for Massa all those years ago.

For now Rosberg appears confident, even popping the race winner’s hat onto his head despite finishing second. Capgate 2.0, though, won’t grab the headlines. Those are reserved for penalty-gate.

‘You get a penalty, you get a penalty…you don’t get a penalty’
No major sport is immune from the influence of referees and adjudicators. Despite the streams of data and telemetry available to F1 race stewards, many fans, analysts and even drivers are often baffled by the decision-makers’ calls.

Daniel Ricciardo took a dim view of what he perceived to be a lack of consistency in the penalties that were doled out in Mexico.

“Lewis deserved a penalty – anyone in that position deserves a penalty,” he said, referring to lap 1 when the Brit locked up and ran across the grass to hold on to his lead at the start.

In the closing stages of the race, Ricciardo’s team-mate was penalised for a similar foray across the turf.

“I saw Max cut the chicane trying to defend Seb. He got a penalty, so I don’t know what was that different with his move and Lewis’s.”

So a penalty for the rebellious teenager but none for the triple Champion and man hanging on in the title fight – clear fodder for the conspiracy theorists.

The only mitigating factor towards Hamilton is that the stewards do allow more leeway on the first two laps of grands prix, as they’re cognisant that the field gets bunched up during the chaotic opening stages of racing.

Nonetheless, Verstappen’s infraction cost him a place on the rostrum. Instead it was Sebastian Vettel on the third step, who celebrated a mini-Ferrari resurgence amid Red Bull’s recent form.

But despite celebrating on the podium after finishing fourth on the road he was handed a time penalty, demoting him to fifth and elevating Ricciardo to third who finished fifth on the road.

Vettel screams blue murder
His usual song relates to blue flags, but on Sunday Vettel was flinging expletives at race director Charlie Whiting and accusing Verstappen of moving under braking while defending third (ironically that’s the crime that Vettel was done for that cost him the podium).

To his credit Vettel apologised to Whiting after the grand prix and played down the importance of the radio messages.

Radio traffic is often a talking point for fans. However, Vettel’s rants have become rather tedious and Tifosi would rather see the four-time Champ do his talking on the track.

At least the Ferrari strategists finally put together a decent strategy. Vettel’s long firm stint on soft tyres before putting on the mediums put him in the mix with the Red Bulls.

But someone out there was more frustrated
His name is Sergio Perez and he spent the majority of his home race tucked under the rear wing of Felipe Massa’s Williams.

The Force India clearly was the faster car, but it was not faster than the Williams on the parts of the track that mattered for overtaking.

Perez claimed the last point by finishing 10th while his team-mate Nico Hulkenberg was seventh. The German had been in fine form since his move to Renault was announced.

Sauber drought continues
Poor Sauber, and poor Marcus Ericsson. The Swede claimed Sauber’s best result in more than a year. But his 11th in Mexico was not good enough to end a points drought that now extends to 370 days and 22 grands prix.

What does the result tell us about 2017 seat allocation?
The driver market among midfield teams and backmarkers is still wide open, with places for the taking at Haas, Manor, and Renault. Further up the field, both Williams and Force India have vacancies.

Jolyon Palmer beat Kevin Magnussen on Sunday while Esteban Gutierrez finished ahead of Romain Grosjean. While isolated these results may seem insignificant, there’s a lot on the line and any positive signal a driver can generate could have a major impact on 2017.