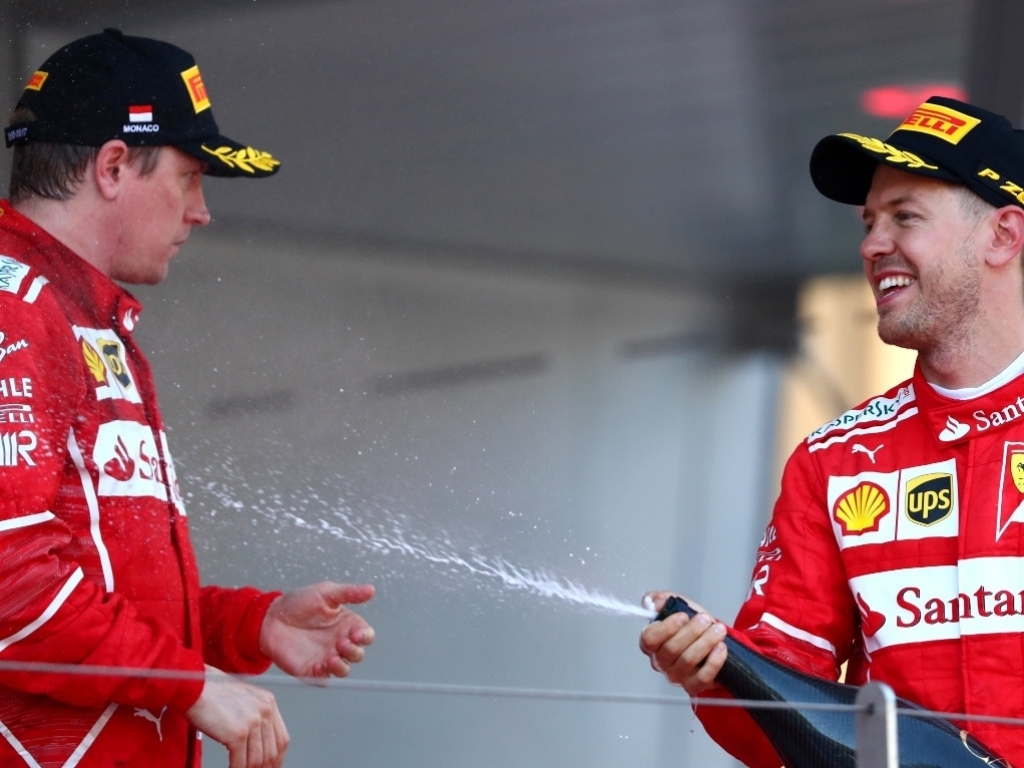 Ferrari have broken their Monaco hoodoos but is there more to come from the “switcheroo-ing” Scuderia?

One-two, one-two
Ayrton Senna is often credited with saying that “being second is to be the first of the ones to lose.” Since Fernando Alonso’s impressive yet ultimately unfruitful foray into racing at the Indy 500, it is apt to seek more wisdom from the Americas. And so we turn to Nascar legend Dale Earnhardt, who like Senna lost his life on the racetrack. “Second place is just the first place loser,” Earnhardt once said.

Many pundits and fans will speculate over the extent to which Ferrari orchestrated the switch between Sebastian Vettel and Raikkonen, who qualified on pole and led his team-mate with relative ease in the opening phase of the race.

Raikkonen did come a cropper of traffic, which allowed Vettel to hone in on his gearbox, and following the first contact with backmarkers, the Finn’s pace did drop off.

Ferrari pitted Raikkonen first to cover off the threat of the potential undercut posed by Valtteri Bottas and Max Verstappen (the jury is divided here: historically the undercut is a threat but in 2017 slow tyre warm-up mitigated this to an extent). Vettel stayed out and banged in purple sector after purple sector and pitted on lap 39 to emerge ahead of his team-mate who had lost time behind a Sauber.

Conspiracy theorists will have a field day with this “switcheroo”, yet Ferrari, like Red Bull, pitted their lead car first – which is standard operating procedure.

Heading into Monaco, Raikkonen was 55 points behind Vettel. With Lewis Hamilton languishing in midfield, the calculation, assuming Ferrari had a strategy that favoured Vettel, was simple: exert maximum pain on the Mercedes driver. The other scenario is that Ferrari, who were poor on strategy throughout 2016, simply made an error by pitting Raikkonen first, as Red Bull did with Verstappen.

Regardless of whether team orders were at play, the difference is that Vettel now has a 25 point lead over Hamilton – essentially the Ferrari number 1 has a full victory in his pocket over his title rival, instead of 18 points. With a long, long season ahead, this is a crucial cushion. As for Raikkonen, Senna and Earnhardt’s comments continue to ring true.

Ferrari break hoodoos, but is there more to come?
It started on Saturday with Raikkonen bagging his first pole position in nine years and extended to race day with the Scuderia scoring their first 1-2 finish since the German Grand in 2010 and first win in Monaco since 2001.

The gusto with which the Ferrari team sang the Italian anthem matched the vigour with which Raikkonen and Vettel started the race, instantly putting tarmac between themselves and the chasing pack.

@apeksha02 nothing. Vettel (right) was just singing along Italian (because Ferrari) national anthem there. https://t.co/ueXpqYBNqc

There can be little doubt now that the SF70H is the best all-round package on the grid. It might still lack the top-end grunt of the Silver Arrows, but the Mercedes has proved to be “a bit of a diva” (Toto Wolff’s words, not ours) prone to off-days and a small, fragile operating window. While Canada may prove a more different proposition for Ferrari, Vettel has three wins and three second-place finishes on a wide range of circuits, and will be in a bullish mood.

It has been 10 years since Raikkonen won the Drivers’ title for Ferrari, which has not won the Constructors since 2008 either. But Ferrari now lead both the Drivers’ and Constructors’ standings, something that an entire generation of Tifosi will find an alien, yet truly enjoyable, experience.

Merc will want to forget this Riviera outing
What do the following races have in common?

A hint: Neither Nico Rosberg nor Hamilton finished last year’s Spanish Grand Prix because of their much-publicised collision. That race in Barcelona, like Hungary and Singapore in 2015, are the only races since the start of the hybrid era that Mercedes have failed to have at least one driver on the podium.

Or put another way, Mercedes have 61 top-three finishes in the last 65 grands prix. (A Silver Arrow driver has been on the podium in 94% of races since Melbourne 2014.)

The men from Brackley leave Monaco 17 points adrift of Ferrari in the Constructors. Yet considering Wolff admitted that the W08 presents problems – specifically having a small set-up window and problems firing up its Pirellis – P4 for Bottas and P7 for Hamilton is a reasonable return.

This is especially true for Hamilton, who started in midfield after missing out on Q3. The six points the triple Champion collected around the Principality represent a generous haul given his woes on Saturday. And he admitted as much after the race.

Ric and roll for Red Bull, but Max rages
Daniel Ricciardo made his debut in Monte Carlo for Toro Rosso in 2012. It was an unhappy experience as a steering problem forced him into retirement. The following year wasn’t much better, with an erratic Romain Grosjean crashing into the Australian, again ending his race. But since then, Ricciardo has three podiums and but for his team’s error in the pits would have won in 2016.

While Ricciardo is a Monaco master, he is arguably the unluckiest driver at the circuit, yet was lucky to keep going after hitting the barrier coming out of turn 1. A poor qualifying – P5 – limited his chances of winning, but his immense pace during the pit stops meant that he used the overcut to get ahead of both Bottas and team-mate Max Verstappen.

As for Verstappen, his was a colourful tirade after realising that he had dropped to fifth after pitting. A slow stop from Red Bull, clocking in at 3.5 seconds, cost him the opportunity to get ahead of Bottas. The youngster needs to keep a cool head and realise that there will be difficult races and like Hamilton said, live to fight another day.

Sauber suffers and so does McLaren
The historical record shows that Monaco is not a good track for Sauber. The team have failed to start or finish 50% of the races it has entered at The Principality since 1993. The 2017 edition was no different as Pascal Wehrlein was jack-knifed into the barriers at Potier by Jenson Button.

The Sauber was lodged against the barrier at a 90° angle – an inverted but somewhat reminiscent accident to Ivan Capelli’s in 1992. Mercifully Wehrlein walked away unscathed and the Safety Car was deployed to clear away the Sauber.

“It seems to be OK” says @PWehrlein – but he’ll get checked out to be sure #F1 #MonacoGPhttps://t.co/LJlchs5Ve2

Marcus Ericsson then got on the marbles at turn 1 and speared into the barriers, which ended his race.

Like Sauber, McLaren also suffered a double retirement. Button’s race was compromised by the 15-place grid penalty and his challenge on Wehrlein, clearly borne of frustration, was, as Wehrlein said, a “silly move”. He is right; it was.

Stoffel Vandoorne, meanwhile, seemed on track for McLaren’s first point of the campaign but he too slid off into the barriers at St Devote.

A rethink is required on time penalties
The genesis of the accident between Wehrlein and Button was in the pitlane. Through no fault of his own, Wehrlein was released unsafely from the pits into the path of Button, which compromised the McLaren driver’s race, as he got stuck behind the slower Sauber.

The stewards handed Wehrlein a 5-second penalty, but with no way past on track and with the race a one-stopper, the one ultimately penalised was Button. Monaco was not the first race in which such a situation played out.

Perhaps a fairer application of penalties would be to compel the driver released unsafely – in this case Wehrlein – to give the position back to the driver compromised by the unsafe release (or whatever other penalty it may be).

And finally, the funny stuff
Force India’s run of five races in the points came to an end in Monaco, though their 100% record for finishing in 2017 is intact. When asked to turn down his engine setting, Sergio Perez said: “Who cares if the engine blows up.” Quite a statement from the Mexican; whose answer comes straight out of the racer’s textbook.

But the best quote goes to Button. The Brit’s team radio was patched through to Alonso from Indy, who told his stand-in to look after his car. “Aw thanks mate, I am going to pee in your seat,” was the 2009 World Champion’s wry response.

And the best for last: Lance Stroll did not finish but he succeeded where the likes of Hamilton and Verstappen failed, as he overtook on track, including a move on race-winner Vettel. Sure, it was under the Safety Car when Race Control had given him permission to unlap himself, but the kid has to start somewhere.