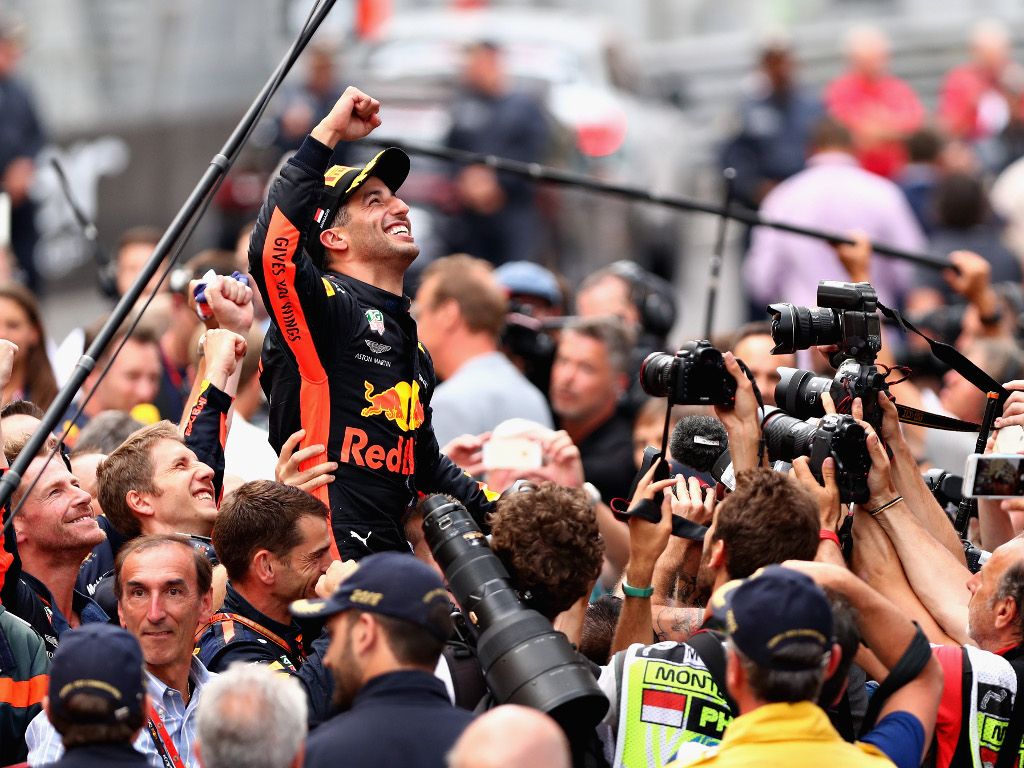 Daniel Ricciardo’s Monaco triumph was a win for the ages, and a win that again underscores his status as the hottest driver on the driver market.

Daniel Ricciardo has made a habit of winning drama-filled races. But on paper the 2018 Monaco Grand Prix seemed different: Fastest in all three practice sessions, pole position and the race win. This couldn’t be further from the truth, however, as the Australian had to nurse his Red Bull to the finish due to an MGU-K failure, a problem that cost him 2.0 to 2.5 seconds per lap for the majority of the race. This guy just doesn’t do easy wins.

Red Bull advisor Helmut Marko described it as an “exceptional” drive. Team boss Christian Horner went further, likening it to an epic performance that is “right up there with what Schumacher did in 1995”. He’s not wrong, besides the point that the drive in question was in 1994, when Michael Schumacher finished second at the Spanish Grand Prix despite being stuck in fifth gear.

Historical nitpicking aside, Ricciardo’s was a win for the ages, and a win that again underscores his status as the hottest driver on the driver market. Still 38 points adrift of Lewis Hamilton it might be a step too far to say he’s a title contender. Sunday, though, was less about title credentials and more about banishing the memory of the 2016 Monaco Grand Prix that was robbed from Ricciardo by a sloppy pit stop.

Vettel chips away, as Mercedes focuses on damage limitation

Second place for Ferrari’s Sebastian Vettel was a case of the four-time champion maximising the result available to him and the Italian squad. Red Bull were just too far ahead. Vettel heads to Canada 14 points behind Hamilton, who seemed reasonably happy with third. It could’ve been a lot worse considering Ferrari bagged a 1-2 last season, while Max Verstappen’s error in final practice also gifted the Brit an extra place. Third for Hamilton and fifth for Valtteri Bottas could easily have been fifth and sixth on another day.

While Ricciardo finished the race with his ultrasoft rubber in robust health, the rest had to manage their tyres for the bulk of the race. Hamilton was vocal on team radio about the sorry state of his tyres and Vettel, like his title rival, also struggled for traction due to excessive graining.

Track position is paramount in the Principality, which meant none of the leading contenders were willing to risk a second stop. The result: During the middle phase of the race, backmarker Lance Stroll shorn with fresh hypersoft tyres, was four seconds a lap faster than the leaders. Tyres have become too much of a variable in the sport, which the new regulations don’t address, though they should.

Ocon best of the rest

Force India have improved steadily through the season and although it is Sergio Perez who has grabbed the headlines thanks in large part to his podium in Baku, his team-mate Esteban Ocon found his form around the tight and twisty Monaco streets to finish sixth – after outqualifying Perez, too.

In the midfield battle it was McLaren that lost ground as Fernando Alonso retired with a mechanical issue while Stoffel Vandoorne was a lackluster 13th. Pierre Gasly again impressed, with seventh, finishing ahead of Nico Hulkenburg’s works Renault and Verstappen, who recovered to ninth after starting last.

As if the pain of crashing in P3, missing qualifying and starting last wasn’t enough, Verstappen also had to suffer the ignominy of watching his team-mate taste champagne on the top step of the podium That Verstappen has had an incident, crash or collision at every race of the season is well documented.

What is new is that Horner has called on his young charger to take more care, while his race engineer also told him during the race to “keep it clean”. The points spread between the Red Bull drivers is among the largest on the grid, with Ricciardo’s 72 points more than double Verstappen’s 30. No further comment is required besides that Verstappen needs a good result and needs it soon.

An error on the grid, several pit stops, a lack of pace, and the last of the finishers one and two laps down respectively represents just about the worst weekend imaginable for a team that has struggled all season long and sits at the foot of the Constructors’ standings. Next up is Montreal, where Williams bagged podiums in 2015 and 2016 – something unlikely to be repeated in a fortnight based on the team’s season so far.