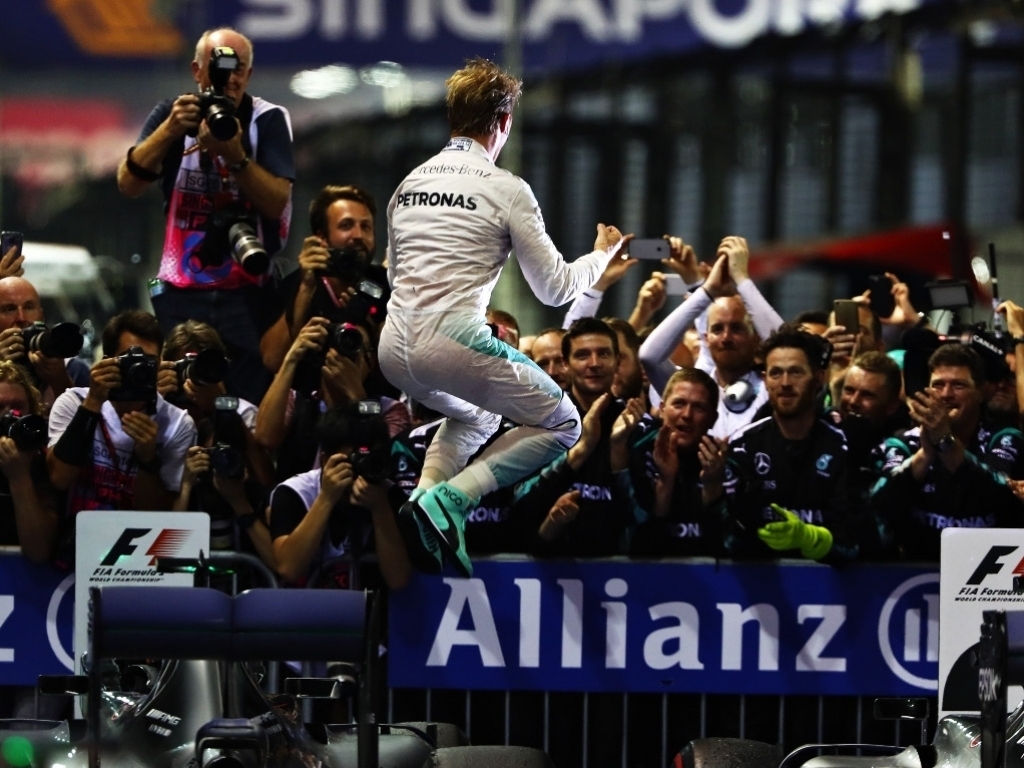 One has to feel for Nico Rosberg. He may have taken the lead in the Championship, but his great performances are never extolled like Lewis Hamilton’s. At the same time, his failings are prodded, poked, studied, and arguably held against him.

There was no failing at Singapore in 2016, though. From his outstanding pole lap – more than half a second clear of his nearest challenger – to his perfect race, this was a performance worthy of nothing but praise.

Toto Wolff claimed, however, that some perspective was required as Hamilton’s woes in FP2 had set back his race preparations.

Would Rosberg have received the same sympathy had such bad luck befallen him? Let’s be clear that there is no suggestion of conspiracy against Rosberg, but the answer is “no”. And Rosberg knows that there is only one way to change that, and that is to defend his Championship lead and claim his first title.

The Singapore slinger
Who would you give this title to? Daniel Ricciardo or Max Verstappen? Both made good cases for themselves at Marina Bay.

Ricciardo’s charge after the last round of pit stops was wonderful to watch – one might even feel a bit of nostalgia and wished to have heard Murray Walker squawking in delight as the Red Bull chased down Rosberg’s Silver Arrow.

Alas for the Aussie, the Red Bull lacked the wings to catch the Mercedes. Ricciardo must wait then to exorcise the ghosts of Monaco and claim a first win of 2016.

In qualifying Martin Brundle suggested that Ricciardo was in the form of his life. With many pundits suggesting that Red Bull could be the team to beat when the new regulations are introduced in 2017, Ricciardo shouldn’t have to wait long before converting his sensational form into victories.

That said, if Rosberg and Ricciardo are the men in form; it is Verstappen who remains F1’s great entertainer. In his memorable battle with Daniil Kvyat, Verstappen seemed to find pieces of track that other drivers wouldn’t see, let alone use; and place his car in spaces that seemed too small for a F1 car.

The last cut is the deepest
Hamilton has his Mercedes team to thank for salvaging a podium after he locked up and Kimi Raikkonen had swept past his W07 to claim third.

By undercutting the Finn in the last round of stops, Hamilton was able to get back past the Ferrari to limit the damage and claim third after enduring a scrappy weekend. The extra points will, of course, prove crucial as the season enters the run-in.

For Raikkonen and Ferrari, Mercedes’ smart strategic play represents not only a disappointing Singapore race, but was something of a microcosm of a disappointing season for the Scuderia.

Fans might remember Sebastian Vettel’s remarkable podium in Abu Dhabi four years ago, when he charged through the field after starting at the back of the grid.

Although there was no top-three finish in Singapore, the four-time Champion showed patience and excellent race craft to make his way up to a commendable fifth after a mechanical problem blighted his qualifying and forced him to start last.

This fine recovery drive, however, is scant consolation to man who won here a year ago and who instead of fighting for the title finds himself 120 points behind Rosberg with a maximum of 150 points left on the table in 2016.

A word for Alonso, Kvyat and K Mag
McLaren’s improved form is not yet a revival, but the men from Woking are getting closer to the type of performance expected from a team of McLaren’s status.

While Kvyat would have taken little joy from being overtaken by Verstappen – the teenager who took his seat at Red Bull – he will be happy to have claimed ninth and his first points in five races.

Kevin Magnussen, meanwhile, took the flag in tenth to earn his and Renault’s first points since the Russian Grand Prix on May 1.

Good results they are, neither Kvyat not Magnussen are assured seats in 2017. Every point helps, though more so for Magnussen than Kvyat, with the Russian widely tipped to be out of the formula come November 27.

In that fateful race, Shadow driver Tom Pryce was killed when his car struck a marshal while travelling at 270kph.

With this in mind, we expect better from Singapore and from F1.