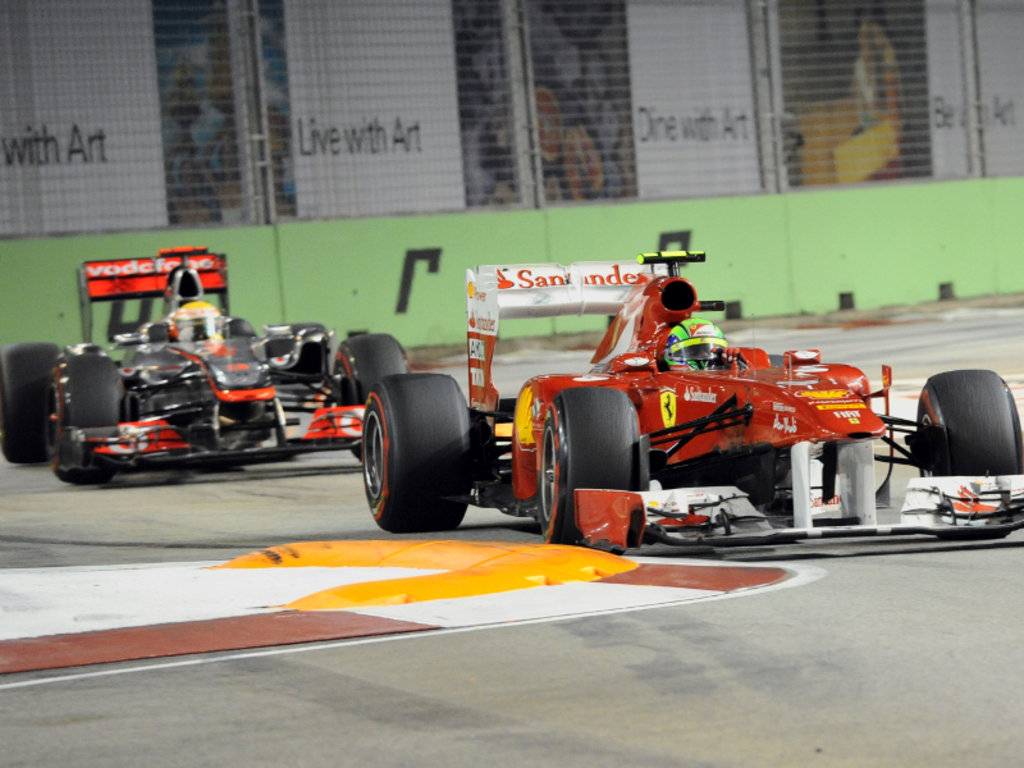 The general damns Lewis, the specific shows up Massa’s mind-set in a grand prix full of buts…

The general damns Lewis, the specific shows up Massa’s mind-set in a grand prix full of buts…

Oh, And The Winner Is Sebastian Vettel…
But to keep the content of this column in proportion to the amount of televised coverage afforded to the race victor in Singapore, that’s all we can tell you at this stage.

Hamilton Didn’t Do Much Wrong, But There’s A Big But Coming…
But is he learning? The problem, to repeat a lament of recent yore, is that it’s still always Lewis. Though he can be defended on the specifics – all racing accidents require two for the tangle, and his error this Sunday was slight to the point of being a sliver – he is damned by the general. ‘One of those days’ for Hamilton is a matter of the plural. For a driver of his talent and pace, his career, even boasting a World Championship at the age of 24, is an accident in the happening.

Yes, he can be defended robustly this weekend because Felipe Massa’s reaction was entirely out of proportion to the infringement, and yes it seemed very peculiar that Nico Rosberg was twice spared a penalty whilst Hamilton’s faint touch drew a race-wrecking drive-through. But oh no, not there again. Not sticking in your nose where it has no place being.

It was careless, it was clumsy. After all of this year’s many incidents – deep breath now: Alonso in Malaysia, Massa and Maldonado in Monaco, Webber and Button in Canada, Kobayashi in Belgium – it was the driving of a driver who isn’t learning the required lesson.

If he’s not careful, a career of great potential will just be recalled as a car crash.

Massa Forgets To Mind Himself
Still, looked at from the other side, the specifics of the incident said just as much about Felipe Massa’s mind-set as it damned Hamilton’s driving. The Brazilian’s hysterical reaction revealed a man feeling the pressure, an apparent grudge against Hamilton, and a driver without a win in three years who spent the past week reading up on the details of Sergio Perez’s debut run-out in a Ferrari.

Massa is likeable but this was ugly.

Singapore May Be The Ultimate Driving Test…
But is it putting on a night-time show at its own expense? Even in its fourth year on the calendar, it’s a venue on and off the track that still lacks definition.

Part of the exposure out of the darkness is that a circuit needs an off-track backdrop to come to life for the viewer. With the fringes of the venue shrouded in shadow against the lights, Singapore is stubbornly difficult to revisualise even immediately after every unveiling. Every corner seems to blend into one with the same gloomy backdrop present throughout. It’s a one-track circuit of perimeter fences, dark shadows and ghostly shapes. Is that how Singapore really wants to project itself?

Vettel Is Just Champion
…But back to Vettel because in the circumstances of a faultless drive to victory and the near guarantee of another title – he can only lose it now if Jenson Button wins all the remaining races and he doesn’t win another point – the time is now to hail Vettel as a true champion. In every facet, he seems to be improving: in his race strategy, in his tyre management, in his race craft, in his knifing through the backmarkers.

When lesser drivers would be relaxing, he is strengthening.

A Four-Way Fight For Second…
But such is the extent of Vettel’s domination, the current man in second, Jenson Button, possesses less than 60% of the champion-elect’s own points haul. Vettel might be two-timing, but this has become the most one-sided driver championship in a decade.

With Button, Alonso and Hamilton all past champions, the ‘battle’ for second place will not set any pulses racing, and motivation is also conspicuously absent from the upper echelons of the Constructors’ Championship with positions one, two and three all set in stone. Mercedes are a little vulnerable in fourth, yet its loss is extremely unlikely in light of Renault’s dramatic loss of form.

With so little left to play for, the best that can remain of this season then is the restoration of a little dignity. McLaren, in a policy that may prove their long-term undoing, have vowed to fight all the way to the line, but interest may be better applied to Ferrari with the team planning to use the final five races as an extension to winter testing. Fernando Alonso, in particular, seemed a little demotivated in Singapore; now’s the start of the time for him to become the team’s driving force again.

Not Quite A New Force…
But Force India are an emerging one. In Singapore, and in what was essentially a straight fight between the midfield runners, they deservedly beat Mercedes, Sauber, Williams, Renault, and all the rest of the also-rans. Only Felipe Massa’s puncture flattered the team’s result, which included the best of Paul di Resta’s career. With the second-half of their name taking F1 into a new and ever-growing territory, they are an under-remarked force for good for the sport.

Welcome Back, Kimi…
But the advance of Force India also adds another dollop of surprise to the well-sourced rumour that Raikkonen is on the brink of returning to F1 with Williams.

If, as can be reasonably rationalised, both parties view their union as a marriage of convenience, then it will most probably be a short fling: Raikkonen gets to put his foot through the F1 door again, Williams make a sizeable statement of intent. With all other star names under lock and key, Raikkonen’s return is as big as it could realistically be.

Yet the risk is palpable. Raikkonen lost enthusiasm and focus in the final undistinguished years of his first F1 career and the driver Williams need to lead them out of the wilderness will require both by the bucketload. Williams are as far down as eighth in the current pecking order and not in great shape to seal the deal as an obvious stepping stone. There are points to prove, and points to doubt. It should be fascinating to behold – but keep the divorce lawyers nearby.