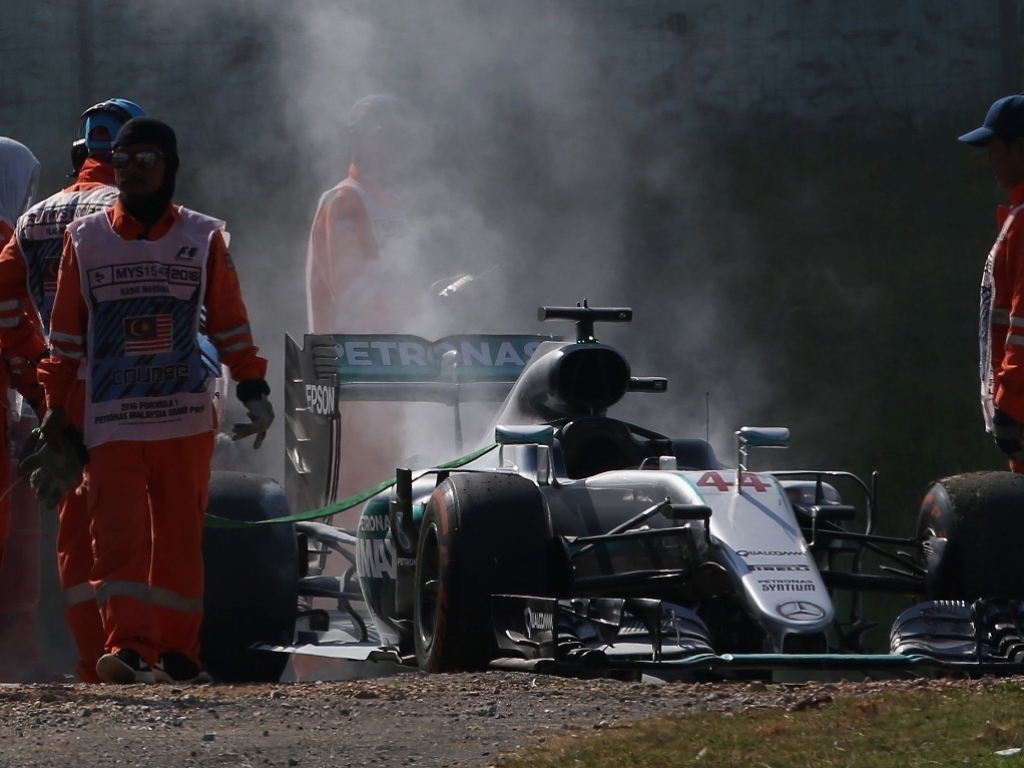 It is all about Mercedes…

The engine failure that could decide a championship
Lining up on the Malaysian Grand Prix Lewis Hamilton trailed Nico Rosberg by eight points in the race for this year’s World title.

40 laps later he was up by five points as he was on track to score 25 points to Rosberg’s 12 having pulled well clear of the battling Red Bulls.

One lap later he was down by 23 and with no hope of recovering – at least for this Sunday.

An engine failure put Hamilton out of the Malaysian Grand Prix, elevated Rosberg to third in the race, and could yet prove to be the result that decides the championship.

Mercedes have confirmed that the blow-out, which came with flames and smoke, was caused by an internal combustion engine failure.

It was just the latest bout of bad luck, and bad reliability that has befallen Hamilton.

“For some reason, which is completely unrelated to intention or any individual performance, a number of things have fallen on Lewis’ car, far more than any of the others,” Mercedes technical chief Paddy Lowe acknowledged to Sky Sports.

“We have eight Mercedes power units in the field and there is no pattern for why it should fall on Lewis’ car.”

For a team that has prided themselves on their reliability and has been applauded for that by their rivals, that their championship battle could be decided by poor reliability is unacceptable.

It’s all in the implication
Hurt, angry, frustrated and downright pissed off but was it right for Lewis Hamilton to imply that there was sabotage involved?

In the wake of his retirement, the Brit told journalists…

“I just can’t believe that there’s eight Mercedes cars and only my engines are the ones that have gone this way.”

“It’s just odd, there’s been like 43 engines for Mercedes and only mine have gone.”

And the killer blow…

“Someone doesn’t want me to win this year.”

If there is one thing you can guarantee it is that Team Hamilton or Team Rosberg will find a conspiracy even when there is none. The last thing either side needs is Hamilton stoking the fires.

And although the Brit was justified in his anger and disappointment, accusing his team – even just by implication – of sabotage is below the belt.

Rosberg hits back at Ferrari
One Ferrari almost ended his championship chances and Nico Rosberg responded by hitting back – literally – at the other.

Fighting with Kimi Raikkonen over what-was-then fourth place at Sepang, Rosberg made contact with the Finn at Turn 2 as he forced his way through.

The championship leader was handed a 10-second penalty for the incident, which even he admitted was “an aggressive move.”

The stewards deemed it to be too aggressive.

Perhaps the biggest transgression, though, is that the 10-second penalty – justified or not – had absolutely no impact on the race result.

Surely a penalty should penalise?