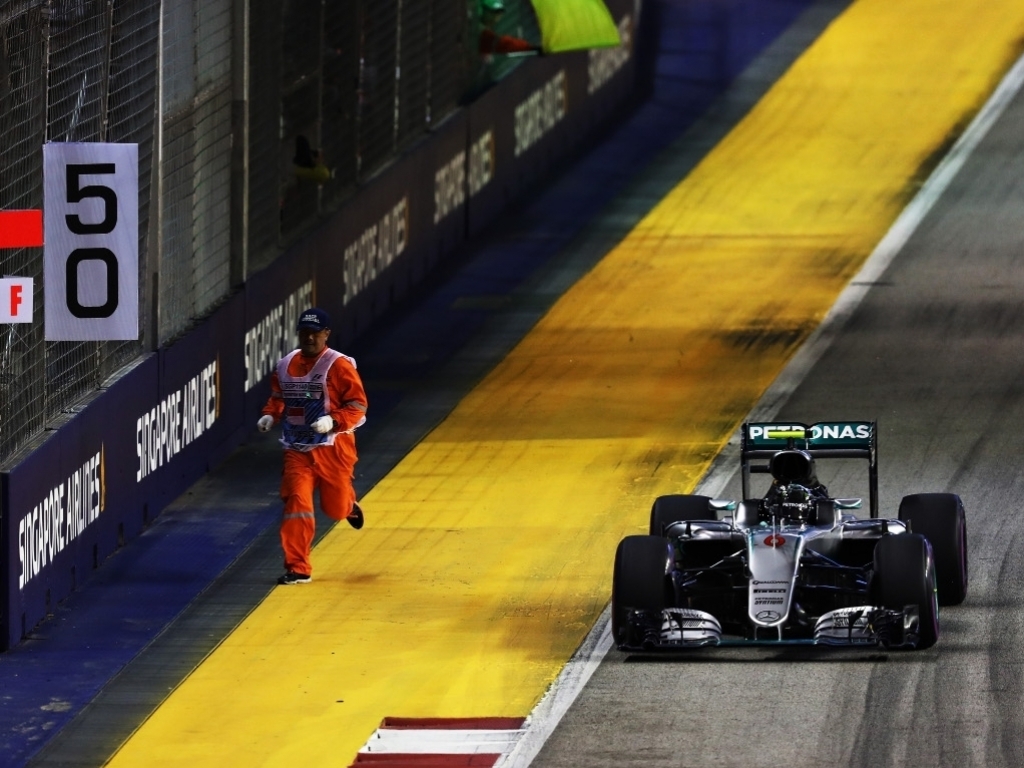 A track-walking marshal, Ferrari’s failure to take the gamble and a missed opportunity.

Track-walking marshal
Formula 1 may be looking into cockpit protection for the drivers but perhaps working radios for the marshals would be a better start.

The Safety Car, not even the Virtual Safety Car but the full-on wheels-on-the-track Safety Car, was brought out for Nico Hulkenberg’s accident at the start of Sunday’s 61-lap grand prix.

But as the race restarted with Rosberg leading the field across the line at racing speed, a marshal was still out on track.

He looked to be about in the middle of the track and, with Rosberg approaching, had to run for safety.

Who is to blame is the big question.

The FIA has began an investigation after being told three times by the clerk of the course that the track was clear.

“That was pretty hairy for sure,” stated Rosberg. “I think just as we didn’t expect the restart, he didn’t either, because the restart was somehow pretty abrupt. Luckily he got out of the way just about in time so it was okay, so of course we have to drive a bit carefully through there.”

In hindsight…
At a time when Ferrari are running around the tracks win-less and with very little to cheer about, they had a great opportunity to put one over on Mercedes in Singapore if only they had been willing to gamble.

Kimi Raikkonen was running in third place in Sunday’s grand prix, doing everything right, even passing Lewis Hamilton out on track.

Running third and fourth with less than 20 laps to go, Mercedes pitted Hamilton for a used set of supersofts to give him a chance at retaking third.

Ferrari were left with two choices: match the strategy or put in a 30-lap run on the soft tyres and hope they held up.

They went with the first, which allowed Hamilton to undercut Raikkonen and race to the final podium position.

It Ferrari had gambled it would have been similar to Nico Rosberg’s battle against Daniel Ricciardo.

There the latter pitted for new supersofts with 14 to go but in the final few laps found his pace dropping off and Rosberg, who covered 28 laps on his soft tyres, was able to hold onto the victory by half a second.

With that in mind, and the fact the Hamilton’s supersofts would have done 17 laps at the chequered flag, is really does appear as if Ferrari once again shot themselves in the foot.

But, hindsight is a wonderful thing.

Grosjean learns it can get worse
After an incredible start to his first season at Haas, not much is going right for Romain Grosjean these days.

The Frenchman’s complaints about brakes, grip and just about everything else have become as common as nearing Jenson Button saying he has no grip. It has become part of the make-up of free practice, as none of the sessions go by without a frustrated Grosjean.

An engine issue in FP1 limited him to just two laps while a spin in FP2 that broke his rear wing meant he covered just 14 the entire night.

FP3 went off a bit better only for Grosjean to crash in qualifying, ending his hopes in the Turn 10 wall.

“Confidence is shit. Close to zero,” he said. “When you spin once at high speed and the second time you spin under braking, it is hard to get any confidence.”

Grosjean, though, must have thought it could not get any worse only for it to do just that.

The 10-time podium finisher did not even line up on the grid as a brake problem prevented him from starting the race. His thoughts on that were evident in his demeanour.

Summing it up later, after taking some time to calm down, he said: “I thought after yesterday it couldn’t get any worse, but unfortunately it did.”

Missed opportunity for Force India
On a weekend where Williams were off the pace, Force India failed to put the sword to their main rivals in the championship.

Force India went in fifth in the standings and with both drivers having qualified inside the top ten. However, an eight-place penalty for ignoring yellow flags meant Sergio Perez started P18 while a first lap accident put Nico Hulkenberg out of the race.

Perez fought back to finish in eighth place, handing Force India fourth place in the standings but as Williams’ Rob Smedley rightly said: “They’ll be much more disappointed than us.”