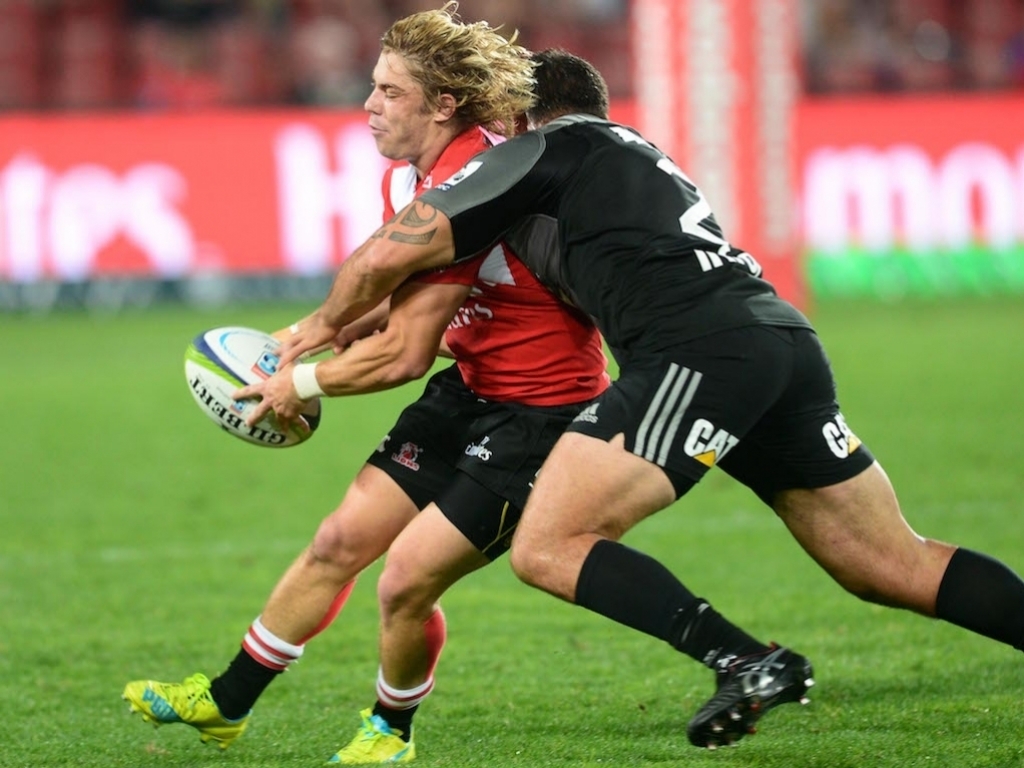 Ryan Crotty scored a hat-trick as the Crusaders came out on top of a ten-try thriller against the Lions with a 43-37 win at Ellis Park.

After a first half where the lead changed hands four times, with the visitors ahead 22-20 by the break, the Crusaders took control with two quick tries at the start of the second half from Crotty.

Two impressive tries from Lions replacement hooker Armand van der Merwe kept the Lions in the contest, but the Crusaders had done enough to secure a second win in six days in South Africa, after defeating the Sharks in Round 5.

Elton Jantjies late penalty after the hooter meant the Lions at least finished with losing bonus point. Johan Ackermann's side though will have rued their lack of composure with key passes at crucial times.

A thrilling first half saw the Crusaders take in a two-point advantage into the break thanks to a Richie Mo'unga penalty, with the lead having chopped and changed throughout the first 40 minutes.

The Crusaders struck first with an easy finish for Crotty after Nemani Nadolo executed the two-on-one perfectly to give the visitors the lead.

Credit to the Lions though for an immediate response, Howard Mnisi's delayed switch releasing Ruan Combrinck to set up Lionel Mapoe for a well-worked score.

Full of ambition early on the Lions then paid a price, when a loose pass from Faf de Klerk was gratefully snapped up by Johnny McNicholl for an interception score, with Mo'unga converting well from the touchline for a 7-12 lead.

Jantjies knocked over a penalty in response but missed tackles were starting to hurt the Lions, as a Scott Barrett offload set Wyatt Crockett up for a straight run at the try line which ended in a third try for the visitors, Mo'unga converting.

Again the Lions responded, forcing the Crusaders to cough up a string of penalties deep in their 22 prior to Jantjies sneaking around the corner of a five-metre scrum to finish in the corner.

Jantjies and Mo'unga traded penalties before the break to send the Crusaders in ahead 22-20, with the pitch beginning to take a hammering from a number of scrums.

Try number two for Crotty wasn't far away after half-time as the All Black centre burst through a gap left by Mnisi and Mapoe to then power his way over by the posts, stretching the visitors' lead.

And soon after Crotty had his hat-trick – served up on a plate again by Nadolo as the Crusaders counter-attacked with real venom, punishing De Klerk's poor box kick as the Lions lost their composure.

Searching for a lifeline the Lions grabbed one through a try out of nothing on a turnover, Mapoe's good work setting up fan favourite Armand van der Merwe for a sprint up the touchline as the hooker showed impressive pace to hold off Ben Volavola.

Sublime offloading from the Crusaders, this time out the back by Volavola, had the Kiwi franchise roaring forward again however as this time Mitchell Drummond crossed the whitewash.

Once more the Lions hit back with Van der Merwe at it again, this time from short-range off a tap penalty through the tackles of Luke Romano and Drummond to leave the Lions trailing by nine after Jantjies converted.

The hosts had their chances to snatch at least a losing bonus point in the final ten minutes.

But they failed to get their maul over the line, with a late knock-on from Rohan Janse van Rensburg snuffing out their attack as they settled for a losing bonus point.