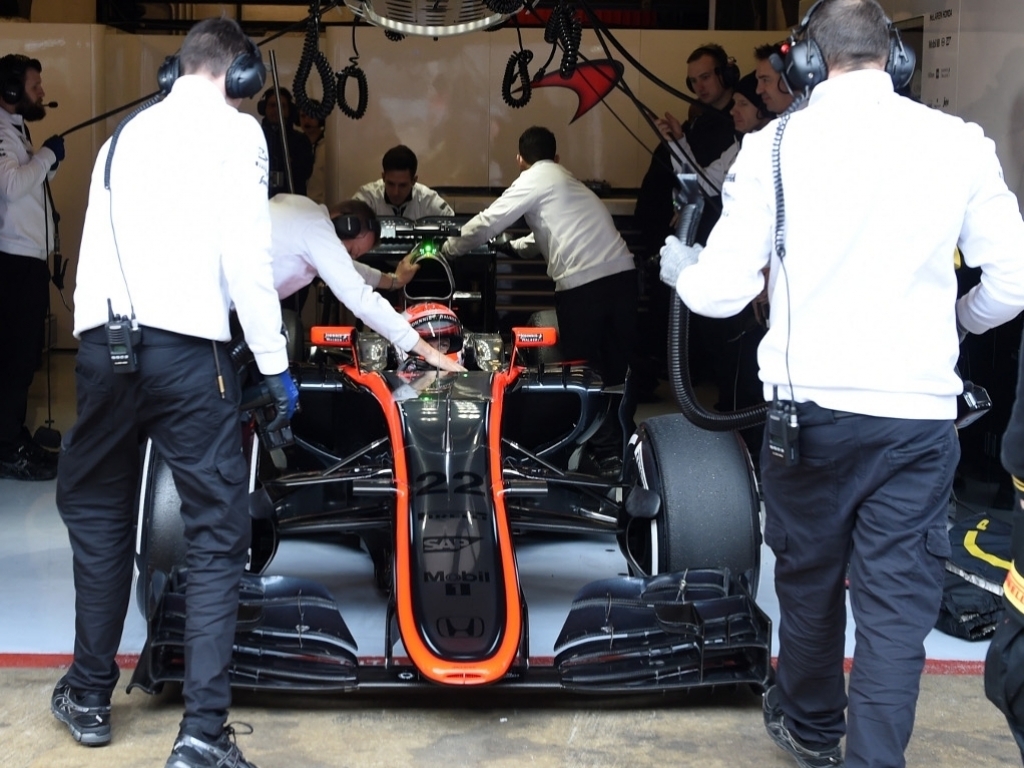 Sauber's pre-season form continued at the Circuit de Catalunya on Thursday morning where Felipe Nasr was quickest while a faulty seal meant an early end for Jenson Button.

Eager to put some laps on their new MP4-30 at the start of the second pre-season outing, Button was out on track within the first hour of testing.

Showing improved reliability and pace, Button worked his way up to sixth place on the timesheets, just 0.875s off the pace, and covered 21 laps.

However, running into trouble, he returned to the pits where the diagnoses was a faulty seal on the MGU-K, which meant a complete engine change.

"We had to stop running today due to a faulty seal on the MGU-K which caused an issue that requires full replacement of the power-unit," announced McLaren.

It was then revealed that the new part needed to ensure there won't be a repeat, won't be available to the team until Saturday.

Honda's R&D chief Yasuhisa Arai said: "We had to stop running this morning after discovering a faulty seal on the MGU-K. That faulty part then caused an issue that requires full replacement of the power-unit – and the time needed to make those changes effectively ends today's programme.

"We'll need to run a re-designed component to avoid a potential repeat of the problem. Unfortunately, we won't be in possession of that updated part until Saturday, which means that we may face the same problem when we run again tomorrow.

"Such issues are all part of testing, but we'll make the best changes we can overnight, and will plan for a productive day of running – with Fernando behind the wheel – tomorrow.

"Hopefully, with a bespoke solution ready for Saturday, both drivers will have an opportunity to get some useful laps under their belts, with Jenson driving on Saturday, and Fernando concluding the test on Sunday."

Meanwhile, Nasr was quickest of all during the morning's session, posting a 1:27.307 to edge Red Bull's Daniel Ricciardo by 0.056s.

Third place went to Pastor Maldonado despite the Lotus driver bringing out the red flags on two separate occasions.

26 minutes into the running, he brought out the first when he parked his E23 at Turn 5. Lotus revealed the problem appeared to be a "sensor issue."

The Venezuelan driver was back on track an hour later only to stop again, this time at Turn 4. Lotus, however, said the issue was not "too serious" and Maldonado was soon putting in the laps again, 44 in total for the morning.

Max Verstappen was fourth ahead of Kim Raikkonen and Button while Pascal Wehrlein claimed seventh and eighth places.

The Mercedes test driver spent most of the morning in Force India's VJM07, clocking a 1:28.329, before hopping into the Mercedes W06 to fill in for the unwell Lewis Hamilton. He did a 1:29.286 in the Mercedes having completed just five laps.

Susie Wolff in her first run in the Williams FW37 was ninth ahead of Hamilton, who managed just 11 before calling it a day.