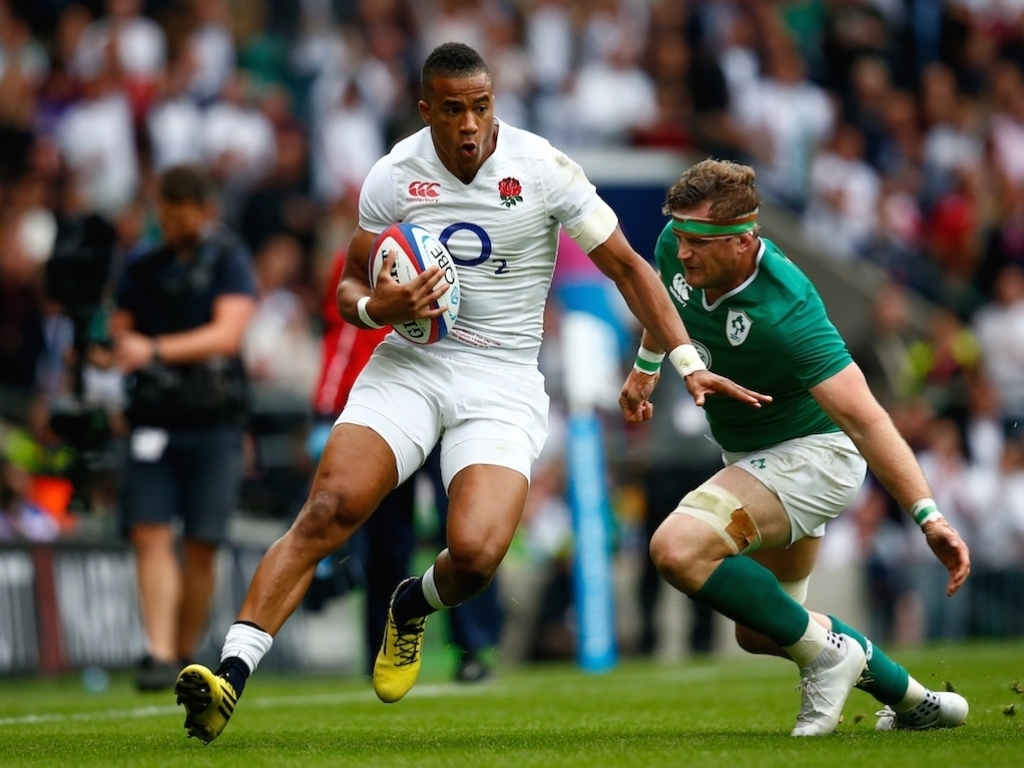 England responded to their loss in Paris by handing Ireland a second-straight defeat, winning 21-13 in the two sides' final warm-up match before the Rugby World Cup.

Joe Schmidt had talked up the threat posed by England wingers Jonny May and Anthony Watson and both players scored tries in the first half to give England a lead they never relinquished.

Importantly, less than two weeks out from the start of the World Cup there were few injuries of note, although Ireland lost Conor Murray early on to a head knock.

Ireland battled back from an off-colour first half to create a contest but England were worthy winners given the way their wingers continually caused problems for their visitors out wide and how they controlled the majority of the game.

Back in the Six Nations, England were undone as Ireland dominated under the high ball. This time around there was no mismatch as England competed with far more assurance than in Dublin.

England's first lineout produced perhaps an inevitable wobble on the first attempt but finished with 14 wins out of 14 attempts.

A patient attack in the opening minutes gave England the first points after Ben Youngs' clever pass freed up Jonny May.

May's trademark is his speed so it came as a surprise to see him bump off as experienced a player as Tommy Bowe with such ease before driving through Simon Zebo's cover tackle. May celebrated wildly, this was his second try in three matches for England, but it was a howler of a tackle attempt from Bowe.

Ireland responded with a Jonathan Sexton penalty bouncing over off the crossbar but England were the dominant side, going from their struggles in Paris to exuding confidence back at Twickenham.

They made the most of Zebo's move to full-back by catching him out of position for their second try. Ford's cross-field kick hung in the air long enough for Anthony Watson to spring up from behind and win the aerial battle before dotting down.

Ireland had several concerns but none more than when Murray lay out cold on the turf after colliding with the boot of a charging Joe Marler. A head assessment ruled him out for the rest of the game.

With the trio of Ben Youngs, George Ford and Jonathan Joseph back to their Six Nations peak with their passing, England were a persistent threat, appearing to have scored another try when Nigel Owens confirmed a second score for May.

That was correctly chalked off for a forward pass, after Owens got word from the TMO while Ford lined up the conversion.

Stuart Lancaster would have been pleased to see Ben Morgan win a key turnover and May hareing around with intensity, while a scrum against the head from Ireland likewise will have delighted Schmidt.

A lost lineout however five metres from England's line, stolen by Parling, summed up Ireland's inconsistent first half which peaked with a strange decision from Eoin Reddan to box kick in England's 22 with Ireland on a rare attack.

The visitors were fortunate to only be down 12-3 at half-time. Eleven missed tackles in 40 minutes was a bizarre statistic for a side who are normally so well-drilled.

A powerful England scrum handed Ford the chance to extend the lead after half-time, which he did also off the crossbar, but Ireland were beginning to look more like themselves despite a squandered overlap from Jamie Heaslip.

Sexton's three points chipped away at England's advantage and Ireland then threatened off turnover ball with a run up the touchline only for Ford and May to just about get England out of trouble.

The Irish reward though came soon after – Heaslip shifting the point of attack from the lineout before the Irish captain Paul O'Connell dove low and hard for his team's first try. O'Connell had to wait eight and a half years between Test tries until he scored against Scotland back in March – now he has two in four games. It more or less wiped out England's advantage, making it 15-13.

A superb steal from Sexton kept England out on their latest attack as the benches were summoned, Ireland eventually deciding to replace Sexton as he began to struggle with cramp.

Richard Wigglesworth thought he had scored England's third try but his effort was ruled out for an earlier offside, after Owen Farrell's speculative pass wasted a six-man overlap for England out wide.

Farrell did add two late penalties to move England ahead 21-13 as the game grew increasingly scrappy, the crowd roaring at the sight of Sam Burgess clattering Ian Madigan, as England eventually finished the job.

The majority of the 80,138 crowd will have taken great heart from seeing England defeat the Six Nations champions only 13 days before they open the Rugby World Cup against Fiji.

Man of the match: Dave Kearney shone for Ireland while Mike Brown, Ben Youngs, Tom Wood and Anthony Watson all stood out, but Jonny May once again was exceptional.

Moment of the match: After a dominant first half Ireland needed a score urgently and got it through their captain Paul O'Connell, on what might prove to be his last outing at Twickenham.

Villain of the match: Nothing nasty to report.

by Ben Coles at Twickenham