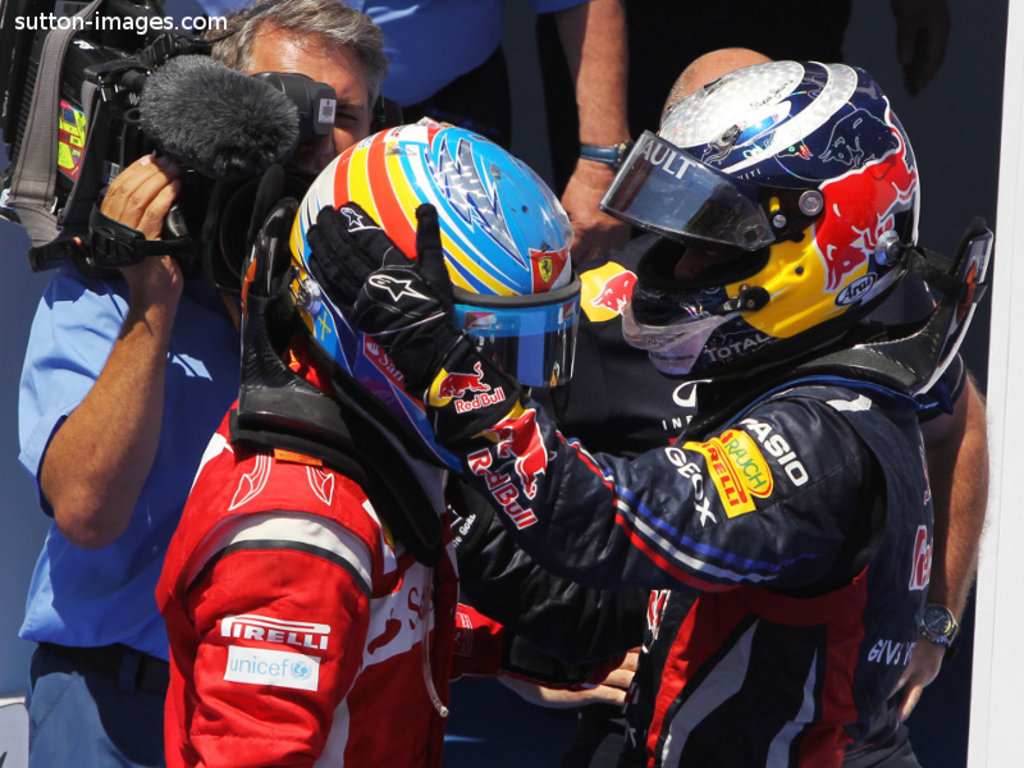 It was siesta, not fiesta on the streets of Valencia.

Star of the Race
Sebastian Vettel, Red Bull, 1st
Business as usual for Seb. Pole and a win. Canada just a blip on the old radar. To drop just 14 points in 8 races is quite incredible and the number of people who think the Drivers’ race is still open and up for grabs is probably limited to two now. Lewis Hamilton and his business partner, orangey tan man.
Vettel was most impressive towards the end of the race when he opened up the gas. Like a 10,000 meter runner who’d saved up 1500 meter pace for the last four laps he put on a sprint finish just for fun.

Overtaking Move of the Race
Lap 18, Nick Heidfeld on Sergio Perez
Heidfeld may have been on fresher tyres than Perez, but to hang it out round the outside of the Turn 17 hairpin took quite a bit of bottle. He had his team hammering the pratt stand after a Sauber-impact last time out.

Winners
Fernando Alonso, Ferrari, 2nd
Fernando’s best result in Valencia, and as he himself professed, his best race of the season. He managed to hold on to second despite playing catch-up in the strategy battle, and thanks to Mark Webber’s ill-advised early rush for Primes.
His start was effortless. Quite often he’s been caught out by running wide into the first turn, but today he actually stole third place from his team-mate in a move reminiscent of Belgian BMW drivers pushing in to the queues for French autoroute toll booths. While Felipe was dutifully queueing behind Mark Webber, Fernando just drove round him. Felipe should have listened to Uncle Ayrton – if you don’t go for the gaps, you’re not a racing driver.
After that Alonso kept in close company with the Red Bulls for much of the race, only flagging in the last few laps when he put on the Pirelli Medium tyres (and there was no pointing pushing further).

Mark Webber, Red Bull, 3rd
Webbo proved that he can be there or thereabouts for an entire race distance which is obviously something’s that’s been playing on his mind. He admitted afterwards that it had been his call to go for Primes when he did and it was the wrong call. It left him with a slightly smaller trophy than he could have had, but there’ll be no sleep lost over that.

Lewis Hamilton, McLaren, 4th
Wehey! A race when Lewis didn’t hit anyone. Actually we could have done with Lewis creating a bit of mayhem, but all he did was follow people and overtake Michael Schumacher. And everybody does that.
Rarely the pragmatist, he knew from the moment his tyres started wearing out in the second stint that he wasn’t going to be catching the three guys in front, so fourth place was the summit of his ambitions. In the end he was helped to it by a sticking Massa rear tyre. Without that breathing space it could have been interesting…

Felipe Massa, Ferrari, 5th
An absolute gem of a getaway from Felipe who had a stunning first 300 meters. The way he rocketed past Hamilton and his team-mate it looked like he had double KERS. He was through from fifth and should have been up to second but chose not to dive into the gap that Mark Webber sportingly left him. So he backed off and got overtaken by his team-mate. So in the end all he came away with was fourth on the opening lap. It deserved more.
He didn’t have an error free race, running off line on a couple of occasions, and paid the price of being left out too long for his tyre changes. That combined with the delay on his rear left cost him fourth place.
It would have been so much more interesting if he’d made it through to second on the opening lap.

Jenson Button, McLaren, 6th
Jenson had another storming race. Except his storming was confined to Lap 6 when he got past Rosberg by using an entirely different braking point. The Mercedes driver seemingly using one closer to that of a Mercedes DTM car than his W02.
When he got past Rosberg and still couldn’t match the pace of the front five, you knew he wasn’t going to have much of an afternoon.

Nico Rosberg, Mercedes, 7th
Another race where Mercedes looked like the first of the mid-grid runners and not the last of the front-runners. Rosberg will be pleased to have got back in front of Michael, but their qualifying was very close. Ultimately, neither will be happy to be so far off the three teams in front.

Jaime Alguersuari, Toro Rosso, 8th
A fantastic result for Mr.P18. To get so far forward on two stops, from P18 on the grid, without the intervention safety cars or drivers going off in front of him was remarkable. And he didn’t hit anyone. Almost the driver of the day.

Max Mosley
The former FIA chief insisted that engines and gearboxes could and should be made to last for multiple races and using two engines per race weekend was a stupid and unnecessary expense. With 24 finishers out of 24 today he has been proved correct.

Losers
Valencia
After such an enthralling grand prix in Canada it was always going to be a reality check coming to race in Valencia. What we desperately needed was a couple of safety cars round about the times when cars were pitting for tyres. Where’s Nelson Piquet Junior when you need him…?
The Valencia Grand Prix of 2011 was actually the most exciting Valencia GP we’ve ever had. The trouble is, that’s a bit like saying it’s the most exciting Accountancy seminar I’ve ever been to. Valencia is a slightly more exotic Detroit-on-Sea. Full of passionate fans, which is good, but never a feast of motor racing.
The most exciting bit of the BBC coverage was the combined team of Humphrey, Jordan, Brundle and Coulthard trying to sneak into Parc Ferme afterwards. The BBC post-race coverage is often the best bit of it all.

Michael Schumacher, Mercedes, Way back
Michael got a sense of d