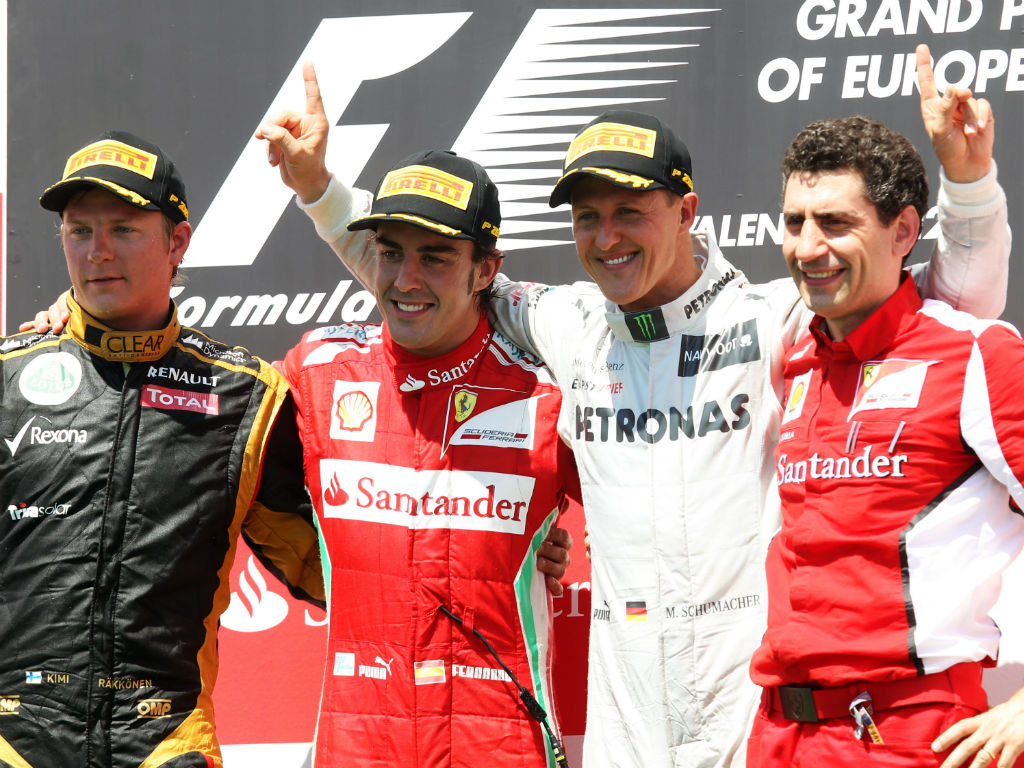 There were some big winners and big losers in Valencia. Including one very surprised winner…

There were some big winners and big losers in Valencia. Including one very surprised winner…

Star of the Race
Fernando Alonso, Ferrari, 1st
By rights this should have been going to Sebastian Vettel, because he was engaged in the most singular demonstration of superiority we have seen in 2012. Short of half-distance he was already twenty seconds clear, a whole pit-stop ahead. Then we had the Safety Car and the Red Bull alternator decided that was enough for the afternoon.
However, you couldn’t give this to anybody but Fernando Alonso; one of the stand-out drives of his career and one judging from his podium emotions that evidently meant a lot to him. He got everything right at the start moving from P11 to P8 and waiting for the right moment to make a string of assertive overtaking moves (impressively at a number of different places around the track) where the risk of a ‘Maldonado’ was minimized. He picked up a minor flatspot getting past Mark Webber and late on he survived contact at Turn 2 with Grosjean that Fernando himself admitted could have thrown him into the wall. But as he said in Canada, you toss the coin…
He was also helped by the McLaren pitcrew doing their usual passable impersonation of the Chuckle Brothers during Lewis’s second pitstop that handed a place to the Ferrari. However to snatch a podium place from 11th on the grid would have been a major achievement, to take the win in front of Spanish fans was a truly great sporting moment. Even if we were denied the 8 from 8 statistic.

Overtaking Move of the Race
Lap 10, Romain Grosjean, Lotus, on Lewis Hamilton, Mclaren
As Jenson Button had said gloomily before the race, “you can’t overtake around here.” Which only goes to prove that even the drivers don’t know what is going to happen in races in 2012.
This could gone to many different drivers, the Valencia track forgot itself and gave us a feast of passes: Raikkonen on Maldonado, Maldonado on Webber, Alonso on Schumacher, Raikkonen on Hamilton, Perez on Button. However the key pass early on, when the cars were at their heaviest, was Roman Grosjean going round the outside of Lewis Hamilton into Turn 12. It was neatly pulled off and Hamilton was very fair in ceding the place.

Kimi Raikkonen, Lotus, 2nd
Raikkonen got a great start and was unlucky not to be third going into Turn 2. From there he laboured, exiting after the first pitstops into a scrum of traffic which had its own chaotic character, with unstopped cars mixing it with those on fresh rubber. He had to be careful. Kobayashi in front of him pushed Bruno Senna into an accident and miraculously escaped the blame. He threaded his way through but didn’t have enough to challenge Lewis until his tyres went off, so it’s unlikely he could have done anything about Alonso. When asked if he could have won Kimi said, “we didn’t so there’s no point to if and if.” It is what it is.

Michael Schumacher, Mercedes, 3rd
Making up the trio of Ferrari drivers and trio of World Champions on the podium Michael only realised he had attained that much-quoted goal after he’d crossed the line. It may have been fortunate, but given the kind of bad luck he’s had this season he was due it.

Mark Webber, Red Bull, 4th
It was one of those strange afternoons. Fernando first from 11th, Michael 3rd from 12th, Mark 4th from 19th and Vitaly Petrov in a dizzying 10th place after three pit-stops. And all this without rain. Mark claimed his traditional placing in 2012 (4th) and moved into second place in the drivers’ title race and looked pretty bemused by it all.

Nico Hulkenberg, Force India, 5th
Hulkenberg clung onto 5th place. His last lap was a 1:50, five seconds slower than the chasing Rosberg and slower than DiResta who’d used one less set of tyres, but he held on for his best F1 result.

Nico Rosberg, Mercedes, 6th
Unseen by the cameras Nico put in a heroic late-race charge with several fastest laps on his way to pinch a place off target Jenson Button. When he got there he found other cars, such as Perez and DiResta and Maldonado going backwards and suddenly he was in 6th. What looked like an 8th and 12th afternoon turned into a 3rd and 6th for Ross Brawn’s team.

Paul DiResta, Force India, 7th
Paul did extraordinarily well to drive a one-stop race when everyone else, even the Saubers, went for two or more. Normally he could have relied on Valencia to obstruct faster cars that were out of position, but for once they seeped through.

Jenson Button, McLaren, 8th
At least his car didn’t fall off the jacks.

Sebastian Vettel, Red Bull, DNF
This was like a grand prix from the old days, when leading cars just gave up the ghost and retired for a strange mechanical reason, and then before you’d even worked out the consequences, another one retired. It was all going fine until Jean-Eric Verne lost it under braking and clattered into Heikki Kovalainen bringing out the Safety Car. The suspicion is that the alternator on both Vettel and Grosjean’s Renault systems overheated. But they won’t have that trouble in Silverstone, they’ll just need to be waterproof.

Kamui Kobayashi, Sauber, DNF
Kamui got a grid deduction for Silverstone after his clash with Massa and he deserved it. It was marginal that Senna should take the blame for the first incident and the second was straightforwardly clumsey from Kobayashi san. That after another great qualifying effort when he put some of the Perez hyperbole into perspective,

Felipe Massa, Ferrari, 16th
Just when it looked like it could be shaping up nicely for Felipe along comes one of the four drivers most likely to have a collision (Senna, Maldonado, Grosjean and Kobayashi). Massa was one of the fractional losers in qualifying, but was already up to P10 by the opening lap and a top six result was on the cards… until he got slightly more than the traditional Kamui kiss.

Pastor Maldonado, Williams, 12th
There’s a well-worn and affectionate phrase; “he’s not as stupid as he looks” but after the European Grand Prix in Valencia, you’ve got to say that Pastor Maldonado is every bit as stupid as he looks. He threw away a great result in Australia and now he’s gone and thrown away an almost certain podium place in Valencia. He was closing on Lewis Hamilton at great speed. Lewis’s tyres had fallen off the cliff. Instead of waiting a few more corners – he had a lap and a half left – he rushed to get past him and produced an avoidable accident. What makes it worse is that he then tried to blame Lewis Hamilton for a bit of driving which was every bit as bad as when he deliberately drove into Perez in Monaco. Hamilton’s line through the corner was no different to the one that Maldonado had employed to keep Kimi Raikkonen at bay early in